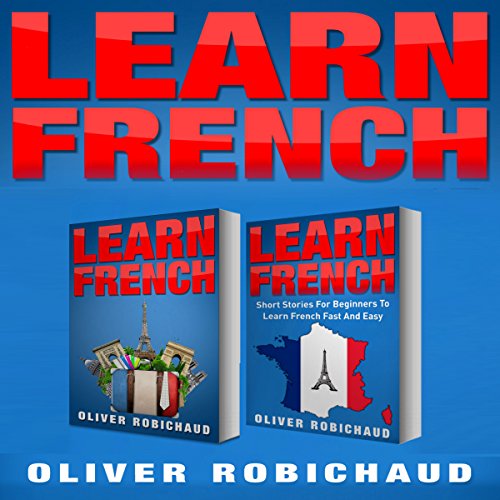 The ultimate combo to learn French today! Are you looking for the best way to learn French? Well, look no further. This audiobook is, simply put, the best on the market for learning French. Why do I say that? Because this audiobook does what language books should do - teach you the mechanics of the language, not a bunch of tourist trap phrases that you'll forget the second you leave the country. If books don't do that, then they make the critical mistake of going into far too much detail, and managing to bore you half to death by virtue of the fact that they've spent 30 pages going on about three different kinds of articles. I don't do that either.

What this audiobook does do, and does very well in fact, is set you up with the knowledge that you want and need of French in a very short time frame, so that you can blast through this audiobook and already feel like you're set up for success. This audiobook isn't a reference, nor is it a crash course on the French language - it's both. You'll listen to this audiobook and understand, then you'll apply what you've learned (and inevitably look back at this audiobook down the line to rehash your memory), and you'll grow even more as a French speaker.

Don't waste your time and money on a subpar French book. Go with the best from the get-go. Learn French with stories. Learn French is the ideal audiobook for students of French who want to take their comprehension of the language to the next level. Rather than being a traditional French grammar audiobook, Learn French offers listeners a series of short, easy stories, in both French and English.

The idea itself is pretty nice. It is a fairly good idea to learn a living language in context which gives learners a great opportunity of acquiring both vocabulary and grammar systematically.

To my mind one must have a native speaker to read model texts for foreigners learning a language otherwise students will definitely memorize wrong pronunciation and intonation structure.

An excellent way to assure this topic

I found this valuable guide from Amazon. This book is so helpful and makes me excited and cannot wait to get started. Everything laid out and explained in an easy to follow guide. Thanks for publishing this. I will be referring friends. Worth to listen!!!

The narration of the book is fully like its name

Fully loaded with so many relaxing guides and information, this book gather so many good ideas among us! really awesome it was proved as a helpful book for me ! listen with much love really awesome it is ! surely recommend it !

A comprehensive guide to turning me feel deeply

I bought this guide from Amazon and It's helpful for all of us. Everything taken in this book makes sense, definitely a good listen! I recommend this book and would listen more books from this author. Recommended!

The book exceeded my Expectations

This book brought impressive achievements. A useful book forever. The author published an excellent book for everyone. I'm inspired!

I have become realized well from this book

I love everything about the book. I’m not even finished yet but the book has been so good so far I had to write a review. I would suggest this book to everyone.

This book is an excellent source

Just started with the book but I already can tell it is going to be so helpful for my learning !! It works perfect if you have say an iPad and phone . Listen to the audio in one and follow along on the other .thanks to speaker.

Excellent and helpful this book..!!

This was exactly what I needed, it is informative and easy to understand. This great book touched on every aspect of what I am working through in recovery. I will listen it again and again.

This book was an eminent instructor for all of us

Having listen this book for reasearch in helping a loved one in my life I found a great deal of valuable information that I shall use to improve my own well being to a higher level than I already gratefully have. Thanks to the author and may the universe reward you in abundance.

It is a very good book and helpful book

Love this book! Very detailed and the colors make a difference! Very happy with purchase. thanks to speaker.

Has verve and amusement value

The book validates how you feel through research and teaches you how you can rewire your brain to get better. It gives me hope.