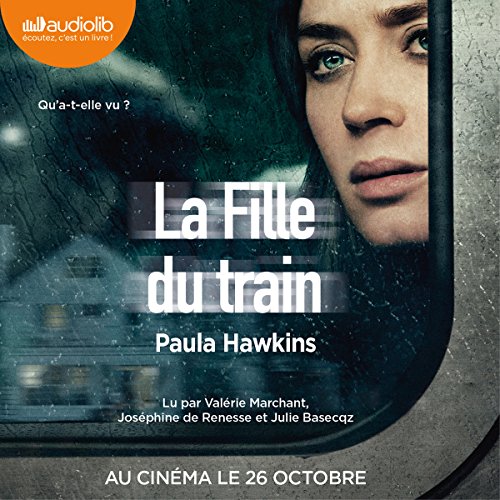 This was a good book

Captivating story and marvelous performance. I liked how we there were three points of view.

Three women's voices unraveled a mystery. Getting to know the three characters, often rivals and very imperfect, brought put a lot of conflicting sympathies and confusing emotions. I found myself waffling between sympathy, hate, anger, and fear for each of the characters and the murder-mystery plot took a back seat to figuring out how these women lived. Trigger warning: there are multiple graphic depictions of domestic violence. Excellent narration.

Would you try another book from Paula Hawkins and/or the narrators?

Not sure and it depends

Would you ever listen to anything by Paula Hawkins again?

Not sure and it depends

Pretty decent, did their best

If you could play editor, what scene or scenes would you have cut from La Fille du train?

Probably 50% of the book

I got this book after seeing build boards for the upcoming movie - "Thriller that shocked the world".Thru long hours till the last minutes I was hoping for the "shock", some unexpected revelation at the end... didn't happen.Nothing shocking, pools of suspects so think and no one is beyond suspicion, so eventually, oh it was that person... oh well.It tries to be "Gone Girl", but overall suspension is barely there. I guess it's easy to shock the word now days.

But it's serviceable for the long commute.