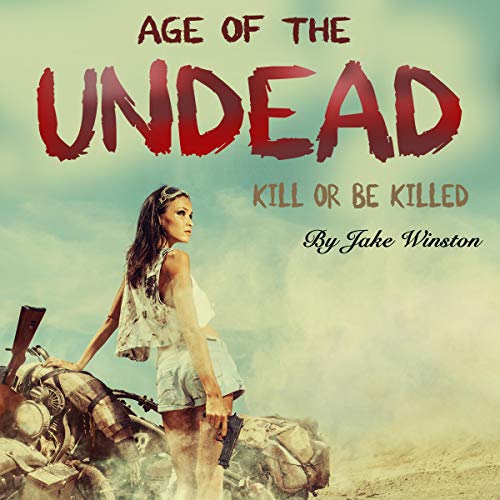 Kill or Be Killed

Valerie is vulnerable but tough. With her handgun, courage, and wits, she survives the beginning of the zombie apocalypse during the mayhem in downtown Phoenix and escapes, only to join a motorcycle gang that she doesn't particularly trust. After a horde of zombies and a series of events, she decides, for a while, to vent on her own, until she joins another group of bikers that seems a bit more trustworthy.

Infected wildlife, difficult decisions, and teaming up with the right kind of people all become part of her journey until they reach a jail full of inmates who have been locked up and who beg them to release them.

Once again, they are faced with a dilemma that will require them to follow their instincts.

This is the first book in a series of six dystopian zombie books.

The scene in downtown Phoenix has got to be my favorite. Although the beginning starts out with a lot of action too. This author doesn't beat around the bush. A lot of things happen in just one hour. The dialogues are catchy, as if you are watching a movie. A book like this could easily be turned into a Hollywood show. Awesome motorcycle gang. The main character has a complex contradiction in her personality between being fragile and vulnerable and tough as hell. Reminded me a little bit of Tomb Raider and Resident Evil as well.

I love short stories like this. I got the second part too. It's really good. I hope this story will continue to do well. The main character is exactly what I was looking for in a zombie-apocalypse book.

I live close to Phoenix and I could just see it happening. Maybe especially now with the corona virus it's a cool book to listen to. I happened to notice that the second book has been released too. Got that too. It's a great continuation of the story.

I think this is one of the best zombie stories I've listened to. It has all the classic elements. The mayhem, the panic, the quiet scenes in a house, trying to find your zombie parents, and yes, some gang members, motorcycle stuff. Reminded me of Resident Evil the last movie. But it's still a different story.

Awesome cover. Good story. Good narrator. I really enjoyed listening to it. I recommend it. The main character struck me as a badass. Thanks.

I wish there was a "0"srar rating!

terrible story
Narrator was a joke! her voice was like nails on a chalkbord!