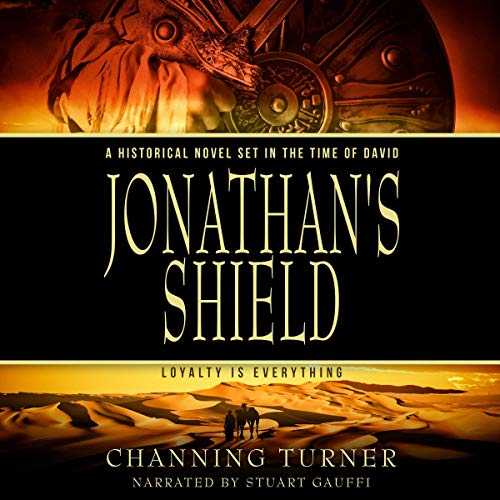 "Intelligently crafted, well executed, and thought provoking. Give this book a try, Christian or not! You'll be glad you did." (Hogwash.com)

"Turner fleshes out female characters as well as male ones (not something the Bible does much of) and the book is the richer for this." (Big Al's Books and Pals)

Beral's only goal is to serve loyally as Jonathan's shield bearer and protect his prince through whatever battles may come. But Jonathan needs a friend as well, a man he can trust while navigating the precarious footing of his father's court. Being that friend puts Beral's life in danger and stretches his loyalty to the breaking point. For what Jonathan wants is to do Yahweh's will, whether that be through defying his increasingly paranoid father, King Saul, or supporting the aspirations of young David, whom Jonathan believes is the rightful heir to the throne.

As he competes with David for the hand of the king's daughter, Beral struggles to hold true to his loyalties, even while he watches King Saul descend into madness. If Yahweh withdraws his protective hand, Beral and his men will be all that stand before their gathering enemies. Only one thing is certain: Beral's fate, as well as the future of Israel, is tied to the virtue of their king, and Saul's honor has long since fled.

Well Worth the Listen

Narration was spot on. Storyline makes reasons for actions actually taken in Scripture, make more sense. Loved that Beral's single-minded loyalty was to Jonathan, King Shaul's eldest son and crown prince....then lastly to Liora his precious wife. Main thing I would have changed was the lack of understanding during visit to witch of Endor. Maybe one day Channing Turner and Cliff Graham ought to collaborate. Well worth the listen.

Excellent Novel based on Bible Events

Of course this is a fictional story. We cannot know what really happened that long ago. Based on the few chapters of the Bible that relate to these events, the author has done an excellent job creating a story that is plausible and can help the reader to understand the actions of people who lived in a very different time. This is why I enjoy historical novels. What someone did is history. Why the may have done it and many cultural influences are usually lost in the historical record.

Highly recommend this story to anyone who wants to understand the past or just likes to go away for awhile. Very engaging.