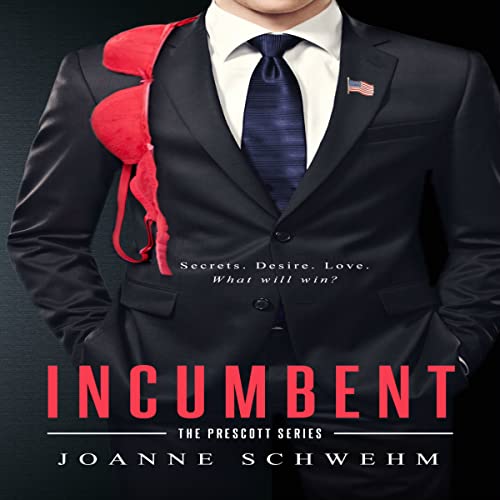 Secrets and lies have been the foundation of Lucy Washburn's life. We're taught to learn from our past, and she's definitely learned from hers. Now that she knows what not to do and whom not to trust, her life is finally coming together, just as she hoped...until she meets him.

Drake Prescott was that kid; you know the type. Both an athlete and a scholar, he was determined to achieve his goals and dreams, the most important being elected president of the United States. There isn't anything he desires more than to hear "Hail to the Chief" played in his honor. Now, an incumbent US senator seeking reelection and paving his road to the White House, he's living his dreams...until he meets her.

Incumbent is a stand-alone novel intended for listeners over 18.

Romance novels seem to focus on bad boys as lead characters so I was delighted that the Hero (Drake) in this book was a nice, sweet, sexy and very normal man. The heroine (Lucy) is also quite ordinary yet there are issues with her estranged family. As the story of Lucy and Drake builds, we witness their strong attraction grow into a loving relationship, yet the shadow of Lucy's past influences their future together. It's a well written story of learning from past mistakes and focusing on a future of better choices.

I appreciate great narration and Tracy Marks did it again with this book. She is always consistently good and one of the few narrators who enhance the enjoyment of audio books. Tracy is one of the rare narrators that you can actually "hear" smile. Such a delight! 😉

💕 Note: This is definitely an adult romance. The story is engaging, unpredictable, seductive and does have detailed sex scenes and some strong language. 💕

It was my pleasure to review this book and I'm grateful to the author, narrator, or publisher for providing me this audiobook at no cost in exchange for my unbiased review because I enjoyed the listen. I recommend this book and I will be getting the next in this series.

This was such a sweet story!!

Notes worth mentioning for this book:

If the title didn't clue you in then the description probably did: this book has elements of politics but no matter which party you support, reading this book won't get your back up.

DRAKE IS SUCH A GOOD GUY!

LUCY IS SUCH A GOOD WOMAN!

I am absolutely blaming my reading tastes of late. I blame my unhealthy diet of Motorcycle Club books and T.M. Frazier's stories I have been scarfing down that have given me a big dose of dark JERK Heroes. (Hmm. JEROES?) Do I enjoy those books? Heck yes, I'm happy and horrified the whole way through. But it has been so long since I've read about a normal guy - one who never harms the heroine, never cheats on her, never verbally abuses her - that I was tickled to listen to Drake's story unfolding. Yay for Nice Guys!! And Lucy? No sniveling, whiny, snipey, weepy, Mary-Sue here. She's normal. She's NICE.
The romance unfolded so sweet. The book clipped along at a great pace, I thought I knew where it was going but WOW I was wrong!

I liked the story very much. I am so glad to see this is a series! I can't wait to find out how relationships play out for the other Prescott's in the family - and I hope Mason + G get together!

Great sound quality, absolutely no complaints. This was the first time I've heard Tracy Marks and her voice is great. Easy on the ears, reads with inflection, paced well; lovely job!!

If you could sum up Incumbent in three words, what would they be?

A Maze Ing, This is a amazing book, I hate politics and I still loved it.

I Love Tracy I have listened to several her books and she does not disappoint. Her voice is very soothing, and has a way of pulling you into the story like you right there. I never feel lost or not knowing who is speaking when I listen to her.

I never wanted to stop listening.

I was gifted a copy of this book by the publisher, narrator or author in exchange for my unbiased review via Audiobook Boom.

If you like a clean cut man and a straight forward story than this is your book. It moved quickly for the most part and had some suspense. Great narrator! You can tell this book is a set up for a series, lots of cute men involved. The bedroom scenes were hot which was a little contradictory to the rest of the clean cut scenes- no warning such as straining pants, preemptive dirty talk or sidelong smoldering glances. Overall, I would recommend this book: 4 stars.

I received this book for free in exchange for an honest review.

Senator Drake Prescott is the hot sexy incumbent and when he sets his sights on Lucy Washburn he is completely attracted to her! Lucy has history that could prove detrimental to their future. This makes for an emotional journey of discovery as I listen and I couldn't put it down!. Given the political storyline, launching this book at a time when everones focus is on the political arena is perfect.

I truly enjoyed this story, characters and narrator. Definitely worth the credit and time to listen.

Drake Prescott is the kind of politician I wish we had in the real world!
What a great character to read about!
I love political romance stories, and this one is a must listen!
There aren't many books that I can say I really enjoy all of the characters,
main and supporting...
But, these characters were so likable, and made it easy for a reader to
want to keep going to book 2 Gripped.

This book had just the right amount of chemistry, sex, and drama. Not too over done!
The narrator's voice was really good, I highly recommend this one for romance listeners =)

Prescott Series - I'm all in

This was a thoroughly entertaining book made better by the narration of Tracy Marks. A good story, enhanced by adult sexual scenes that were not gratuitous. Dialog was good, of course the story is complicated, nothing is perfect or it would be a dull, lifeless tale.
It was entertainment that I will listen to again and download the next volume.

This is my first Joanne Schwehm audiobook and certainly won't be my last!

This is the story of a senator and a school teacher. They come from two different worlds and when they meet, both of their worlds are changed forever. I loved listening to their story and seeing if their relationship could overcome their secrets

Tracy Marks is an excellent narrator. She possess a strong and confident voice and handles the two different characters seamlessly.

Ohhhhh all the feels. All of them. I am not into books about politics... Like at all. But I read the blurb and decided to give it a chance, it had been sitting in my wish list for a long time.

Y'all... I'm so glad I did. First the narration. Holy heck, Tracy Marks is perfection. Of course, dual narration would be my preference but my second choice is Tracy Marks alone because pulls off female and male narration to perfection. She is most definitely one of my favorites.

The Incumbent is about an incumbent senator and a teacher. He comes to her classroom to speak to her high school government class and the spark is ignited.

Joanne Schwehm wrote an alpha character that is not cocky and obnoxious. Just confident and sure. When he gets her phone number and looks her in the eye... I swooned.

There is a lot of drama and angst and a whole lot of love and romance. I absolutely loved every minute of it. The HEA just topped it off for me.

This audiobook was provided to me by the narrator, publisher or author in exchange for my honest review via Audiobook Boom.