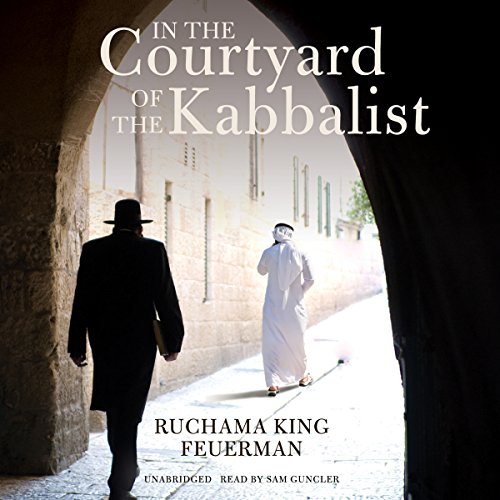 In the Courtyard of the Kabbalist

Isaac Markowitz, an eczema-riddled Lower East Side haberdasher, moves to Israel to repair his broken heart and becomes, much to his own surprise, the assistant to a famous old rabbi who dispenses wisdom (and soup) to the troubled souls who wash up in his courtyard. It is there that he meets the flame-haired Tamar, a newly religious young American hipster on a mission to live a spiritual life with a spiritual man. Into both of their lives comes Mustafa, a devout Muslim who, deformed at birth, makes his living as a janitor on the Temple Mount, holy to both Muslims and Jews.

When Mustafa finds an ancient shard of pottery that may date back to the first temple, he brings it to Isaac as a token of friendship. That gesture sets in motion a series of events that lands Isaac in the company of Israel's worst criminal riffraff, puts Mustafa in mortal danger, and leaves Tamar struggling to save them both.

As these characters - immigrants and natives, Muslim and Jewish, prophets and lost souls - move through their world, they are never sure if they will fall prey to the cruel tricks of luck or be sheltered by a higher power.

It's beautifully read and beautifully written. The characters are fully drawn and the reader has a wonderful ability to make the many voices distinguishable

This book was thought-provoking and moving. The narrator was terrific and added to an already beautiful story - his voice made it come to life.