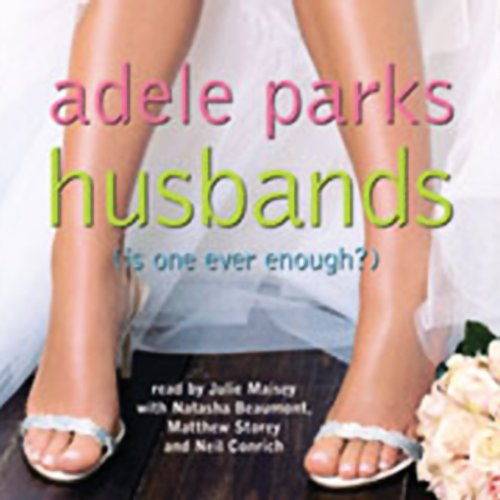 Husbands: is one enough?

Bella secretly married her childhood sweetheart, Stevie, over a decade ago; they were at university, two big kids playing at being grownups. When it all unravelled and reality hit, Bella simply got up and left. And the secret remained a secret.

Years later, Bella meets Philip and, despite her vow never to marry again, she can't resist him. He is a catch: funny, charming, interesting, and kind. The only hitch is, she's still (technically, anyway) married to Stevie. Bella, typically, just ignores the problem, and the moment to tell Philip never quite seems to arrive. So Bella plans never to reveal her secret - after all, it's just a silly piece of paper, lodged at a registrar's office in Aberdeen, isn't it? She hasn't seen Stevie for years; probably never will again. Except that Bella's best friend Laura has fallen in love, and when she introduces her new man to the gang it is none other than Stevie. Could things get any more complicated? Only if Bella and Stevie fall in love with each other again!

The four separate viewpoints on the same events are read by four different actors.

Quite enjoyed this novel. Nothing serious at all but just a bit of fun to pass the time :)

somewhere in the middle of the road ...

on the positive side:
The four main characters are all read by different narrators. This is kind of being in the theatre, which definitely helps the book to overcome some of its weaknesses of the story (this fact adds one star for the audiobook!).
on the negative side:
Interesting plot but it somehow gets wasted the further the story evolves. Most characters remain shallow, are not real-life and not convincing. Particularly the end was unsatisfying.
Though still easy read / listen which some parts to laugh at.