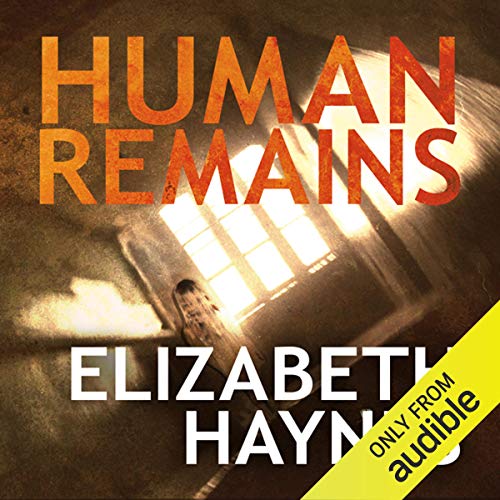 Highly intelligent but socially inept, Colin spends his free time collecting academic qualifications and searching for ways to meet women, until he stumbles upon a new technique that proves both potent and deadly. Police analyst Annabel is shocked when she discovers a decomposing body in the house next door and realises that no one, including herself, noticed her neighbour's absence. At work she finds data showing that such cases are frighteningly common in her own town and sets out to investigate, convinced she is on trail of a killer.

Elizabeth Haynes is a police intelligence analyst. She started writing fiction in 2006 thanks to the annual challenge of National Novel Writing Month (Nanowrimo) and the encouragement of the creative writing courses at West Dean College. She lives in a village near Maidstone, Kent, with her husband and son. Her first novel, Into the Darkest Corner, was the winner of Amazon's Rising Stars and has been translated into 30 languages. Her second novel, Revenge of the Tide, was published in March 2012.

"It's hard to put the uniqueness of Elizabeth Haynes' writing into words. Her stories grip you by the throat and force you to acknowledge that this is what real crime and real horror look and feel like, as well as real love, hope, fear. Suddenly, much of the other crime fiction you've read seems, in comparison, rather like stories made up by writers. Haynes is the most exciting thing to happen to crime fiction in a long time." (Sophie Hannah)

Would you consider the audio edition of Human Remains to be better than the print version?

I have no preference, but the narrator did such an excellent job the audio version may be preferable

What other book might you compare Human Remains to and why?

I cant think of another to compare

I love her voice and accent, the narration was animated but not overbearing

yes especially towards the end

The book was full of suspense and entertaining but also very depressing. It brings to light how lonely and hopeless people can be and how overlooked by a society of busy,multitasking and indifferent people we have become. Do you know your neighbors?
My overall feeling after the book is sadness.

I grabbed up this title as soon as I saw it available because I had really enjoyed "Into the Darkest Corner" by the same author and narrator. I did like this story very much but was disappointed in Karen Cass's reading this time. Her voicing of Annabelle, Sam and some of the side characters was fine, but I think her interpretation of Collin, the villian (that's not a spoiler) I think was too loud and strident for one that I thought should have been voiced more pensively furtive. Also, some of the supporting female characters came across too perky - almost ditzy, and that was also a distaction. A more subtle touch would have been more appropriate. Perhaps just a matter of taste, but for me it downgraded the enjoyment of the listen.

As for the story - very creepy, almost squeamishly so in some places. But it does build suspense and Annabelle is someone to root for. Quite a bit of time is spent setting up the plot, and some advice to readers who struggle with stories that switch narrators frequently - listen to the names that are annonced at the change of a chapter: That is who is speaking, telling their own stories. It may be a bit confusing in the beginning, but you'll catch the pattern within the first hour. I found the last hour exciting and satisfying. Wraps up leaving some questions to contemplate about social ethics and legal justice. Did not find it depressing, would not relegate it to a Lifetime Movie. More of the style of Criminal Minds.

Should be a Life TIme Movie

I would make it into a Lifetime Movie, then you could change the channel and watch something better. It's OK, but not all that gripping.....you sort of have to wade through it.

The newspaper reporter with a conscience.

Did Karen Cass do a good job differentiating all the characters? How?

Not to bad. She has a pleasant voice, and her English accent is interesting, but she has a hard time with male voices. Still she did a good job with what she had to work with.

Do you think Human Remains needs a follow-up book? Why or why not?

No, I think the author needs to move on to other endeavors.

Just could not relate.

Difficult to become involved with. The characters didn't seem real. Just got bored with the story.

A bit far fetched, and another passive protagonist

I enjoyed this author's first book, Into the Darkest Corner, and thought I would give this book a try. This book just did not cut it for me. The plot was far-fetched and the main character was too passive for my taste.
The narrator was perfectly good at reading this book. But If you are grossed out by icky biological happenings, don't listen to this book. And if you are someone who needs the plot to be mostly believable, don't bother listening to this book either.
Without giving spoilers, the book involves many decomposing bodies, and two main unappealing characters whose heads we have to be in for the entirety of the book.

"all the lonely people, where do they all come from"..... I kept thinking of the lines of the Beatles song while listening to this book. This book was very sad and gets into the mind of a very sick person, not for those with a weak stomach. Despite the grisly details, what stands out for me in this book is just how lonely people are in this modern world and how easy it is to give up the will to exist in such an isolated state. Definately thought provoking and disturbing.

Did not finish listening

Would you try another book from Elizabeth Haynes and/or Karen Cass?

I found the writing crass and confusing jumping around to different people. I would probably not try another one of these books.

Has Human Remains turned you off from other books in this genre?

No possibly the writer does better at other times.

Have you listened to any of Karen Cass’s other performances before? How does this one compare?

I loved the narrators job, her accent and intonations were great!

Disappointment and disgust at all the "wanking" and other such terms found in the book.