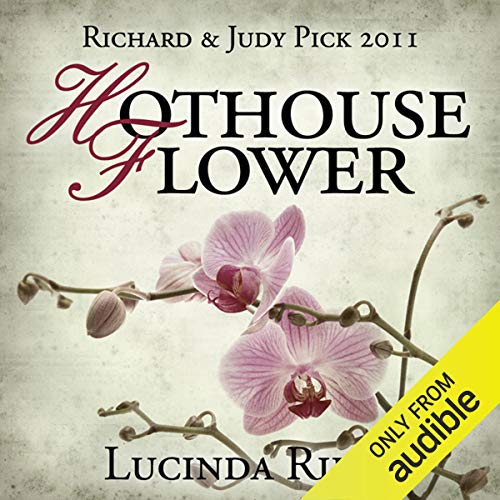 A heart-rending novel that sweeps from war-torn Europe to Thailand and back again....

As a child, Julia Forrester spent many idyllic hours in the hothouse of Wharton Park estate, where her grandfather tended the exotic flowers. So when a family tragedy strikes, Julia returns to the tranquility of Wharton Park and its hothouse. Recently inherited by charismatic Kit Crawford, the estate is undergoing renovation. This leads to the discovery of an old diary, prompting the pair to seek out Julia's grandmother to learn the truth behind a love affair that almost destroyed Wharton Park.

Julia is taken back to the 1940s, when the fortunes of young couple Olivia and Harry Crawford will have terrible consequences on generations to come. For as war breaks out, Olivia and Harry are cruelly separated.

Another moving story of Lucinda Riley

This story visits all the emotions of the human heart. Beautiful!😍
I did not like the voices of the narrator. It almost kept me from continuing to listen 😟

Would you listen to Hothouse Flower again? Why?

I enjoyed the book, but would probably not listen to it again. There were too many stories within stories, which made it feel a little dragged out in places.

This could possibley have been done over two books, or maybe settle for less is more in terms of storyline twists.

Would you listen to another book narrated by Beth Chalmers?

Not sure that I particularly liked the narration style.

Who was the most memorable character of Hothouse Flower and why?

Julia was the stand out character, with the others revolving around her in some way.

A long haul for an audio book, but overall nice story.

I enjoyed the story and all the twists and turns. I think she is an excellent author that can tell a very detailed and captivating story.

Would you consider the audio edition of Hothouse Flower to be better than the print version?

After reading several negative reviews, although I love Lucinda's stories, I had decided against getting this book. However, since Audible has such a wonderful return policy, I changed my mind and took a chance & purchased this book. I am so very happy I did. I LOVED this book. I wasn't crazy w/Beth Chalmers reading initially, but grew to really appreciate her range and accents. So take a chance, I don't think you will be disappointed.

All of the different stories that were interwoven. And also the beautiful description of Thailand.

Have you listened to any of Beth Chalmers’s other performances before? How does this one compare?

If you could take any character from Hothouse Flower out to dinner, who would it be and why?

I need a new author...I have exhausted all of Lucinda's Audible books. I would love to see this book made into a movie.

what a lovely story

I followed the story easily and learned to love the characters. just splendid. go on and purchase.

I have enjoyed all of Lucinda Riley’s books and eagerly await the next one! I do have to say that the attitude about adopted children sometimes not being considered “real” relatives bothered me, though.

This was hard to put down I could not wait to get back to it. Like most of her books it starts slow but I know if I persever it will pay off and this one does not disappoint.

I had high hopes for the book--so many of my favourite themes were promised; few, however, were delivered. The book's greatest lack was forward momentum. Lagging behind that was succinctness.

Would you ever listen to anything by Lucinda Riley again?

Her style is not to my liking, so no.

Would you be willing to try another one of Beth Chalmers’s performances?

Beth Chalmers has a talent for bringing characters to life. Her skill at regional accents and her dramatisation made it easy to picture the people. Unfortunately, some of her characters were grating. The sister of the protagonist, in particular, set my teeth on edge. I turned down the volume whenever her particular character was talking.

Time and time again, the motives behind even simple actions were stated and explained, giving the impression the author had little respect for her readers' intelligence. When I found myself involuntarily rolling my eyes and groaning aloud, I realised it was time to call it quits. On the positive side, I came away with a deeper appreciation of what critics and writing coaches mean when they use the descriptor "overwritten."

I had to give up on this one after several hours of listening, and it came down to a simple matter of trust. I lost all faith in the author's ability to get to the point.

what a brilliant story beautifully narrated . I was entranced from beginning to end. definitely now rates as my number one absolute favourite. if you want to be totally delighted by the layering of characters ..each one creeping into your heart then this is a must read. thank you Lucinda for bringing such undiluted pleasure to me and thousands of readers around the globe

The narrator is great and this is once again a very engaging story from Lucinda Riley. Thailand is interesting and married to the English history, the book kept me entertained until the very end.

I love this book from beginning to end! and the Narator did a fantastic job!

Is there anything to dislike?
I mean what a story!
Anyone enjoying a good share of drama, love, passion and human depth is well cared for here - yet again. Thank you Lucinda!

An exciting and pleasant experience

Beth Chalmers did a lovely job of bringing Lucinda Riley‘s story to life. I very much enjoyed the journey back and forth in time and location!