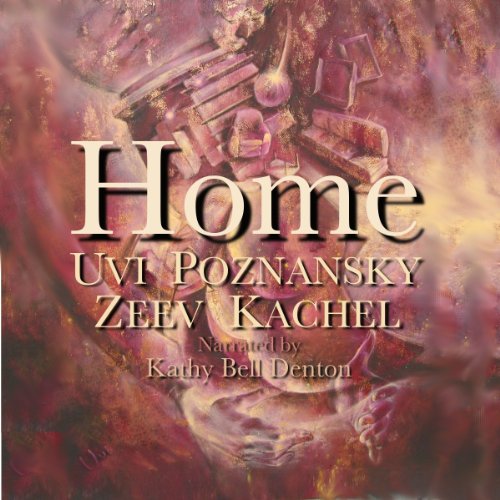 Imagine the shock, imagine the sadness when a daughter discovers her father's work, the poetry he had never shared with anyone during the last two decades of his life. Six years after that moment of discovery, which happened in her childhood home while mourning for his passing, Uvi Poznansky presents a tender tribute: a collection of poems and prose, half of which is written by her, and half--by her father, the author, poet and artist Zeev Kachel. She has been translating his poems for nearly a year, with careful attention to rhyme and rhythm, in an effort to remain faithful to the spirit of his words.

Zeev's writing is always autobiographical in nature; you can view it as an ongoing diary of his life. Uvi's writing is rarely so, especially when it comes to her prose. She is a storyteller who delights in conjuring up various figments of her imagination, and fleshing them out on paper. She sees herself chasing her characters with a pen, in an attempt to see the world from their point of view, and to capture their voices. But in some of her poems, she offers you a rare glimpse into her most guarded, intensely private moments, yearning for Home.

Would you listen to Home again? Why?

What was one of the most memorable moments of Home?

The moment when the daughter finds the silent movie projector in a cabinet, dusty and nearly forgotten. She knows this find will change her life forever, and so do we.

This is the first of Denton's narrations I have heard, and it impressed me enough that I will look for others.

This book shakes the soul. Yes, there is laughter, but the giddy laughter of coming to terms with tragedy, with life, with death.

Home is a book that opens the soul. Reading it is mesmerizing. The story it tells is a story everyone should hear. I listened in one sitting the first time, and am looking forward to sharing it with my husband. For anyone who has lost a parent, or knows that loss comes soon, this book is a must. I recommend both this edition and the Kindle for those whose souls are aching, and those coming to terms with what life and death really mean.

I would recommend this book to anyone who enjoys poetry, family relationships and the universal emotions echoing in my heart, this luminous combination of autobiography and dialog between a man who has died and his surviving daughter?

Both the strengths and fraility of the mother and the father were portrayed excellently.

I have not heard any of her other performances, but I was mesmerized by her voice and the power of the performance.

The yearning many of us share by using the magical metaphor of “life rewinded,” reflecting the theme in her father’s poetry.

The combination of both the powerful poetry and performance has made this a book worth listening to many times.

If you could sum up Home in three words, what would they be?

What other book might you compare Home to and why?


In a day and age when much of the music in poetry has died, you can now hear the voices of father and daughter singing their harmonious duet in Home. Uvi Poznansky takes you with her through that tunnel of memory into her father’s lost world, into his river of poetic dreams, a narrative that flows with the voice of longing, lament, and loneliness, on to the day his immortal soul stands by his grave in “I Plucked a Wildflower.” Transcending all past yearning, Zeev Kachel sings no funeral dirge for himself, but a magical song of release.

Listen with time to ponder

This moving collection of poetry and prose may best be appreciated when listened to rather than read—and then, while rocked back in a comfortable chair with eyes closed or during a long cross-country drive with time to ponder and wonder. “Home” is about relationships and longing—relationships to people and places long past, and longing for ways to heal, understand, and restore connection. It is a revealing journey by poet/writer/artist Uvi Poznansky into the life of her father though the posthumous discovery and translation of his unpublished poetry. Zeev Kachel’s verses explore the meaning of “home” through the lens of a life of loss and displacement, a life one senses may have at times in his later years trapped him in a dark place clouded by memories of war, impermanence, and the terrors of a Nazi death camp. In her own writing, his daughter seeks to enter that dark place, understand how it shaped him and her family’s understanding of home, and determine what home now means in her own life. Though the book description states that Uvi’s writing is rarely autobiographical, this work often seems deeply personal, exploring her own sense of loss and dark places and how one can survive the challenges of aging, separation, and loss. As with all well-crafted literature, “Home” invites us along on that journey. Kathy Bell Denton’s deeply moving narration needs to be listened to with ample time to pause, reflect, and consider the fragile but precious gift of “home.”

A lyrical collection of beautiful poetry

Home, by Uvi Poznansky and her departed father, Zeev Kachel, is a glorious and lyrical collection of poetry that you will want to savor. Ms. Poznansky published this work after discovering a collection of her dear father’s poetry upon his passing. Intermingled with her own glorious writing, it is a true gem.

Kathy Bell Denton’s narration is soothing and appropriately emotional, drawing in the listener to each succession of poetic passages.

Do yourself a favor and give this literary gift to yourself for Christmas or Hanukah.

Memories shared by the author and her father. They touch one deeply with their thoughts. Beautifulky written and enjoyable to listen to The narration was well done by Kathy.
Given audio for my voluntary review