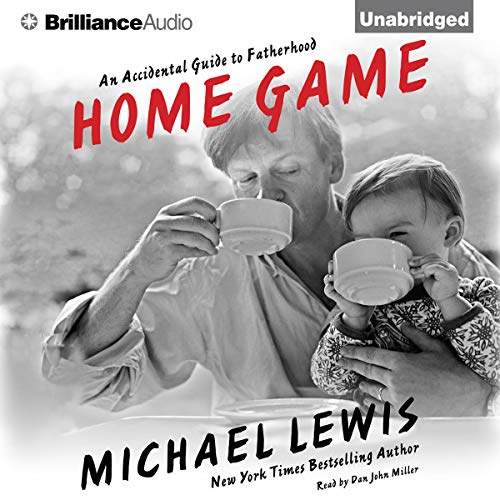 Home Game is, without a doubt, one of the most enjoyable and satisfying books I’ve ever listened to, evoking the early comedy albums of Bill Cosby  not only for the wise and testosterone-fueled insights on parenting offered by author Michael Lewis, but for the excellent comic timing and hilarious mimicry employed by the narrator, Dan John Miller.

Lewis chronicles his life as a father dividing time according to the appearance of each child: Quinn, Dixie, and baby boy Walker. Less as a protagonist than an impassioned fan, he observes the birth of his family blow-by-blow, and lucky for us, replete with sound effects. Wife Tabitha’s oxygen-mask-muffled pleas in the delivery room, the discomforting words of the obstetrician, the indignant back-seat declaration of his displaced first-born that “My daddy is dead,”  all these voices are cake in Miller’s capable vocal chords. He even manages to convey that climactic moment of birth, described by Lewis as “...the sound of a hairless dog escaping from quicksand”, with a loud swish-suck-pop! using only (hopefully) his mouth.

Lewis’ genius resides in his ability to relate the confluence of love and pride, horror and exhaustion, that comes with the active participation in growing little human beings. In the daily grind he discovers the long secret of motherhood: “It’s only in caring for a thing that you become attached to it.” But it’s the particular vulnerability of a man journeying through this still foreign territory, and his humorous and unself-conscious commentary on it all, that Lewis brings to the conversation and which Miller communicates so convincingly.

I guess I’m just envious when Miller, as Lewis, proudly confesses that, “My main ambition when my wife went into labor was to be sober.” Or, reminisces without shame about the day he took the four and six year-olds to the racetrack. (Okay, they did win.) Or, when he expresses with glee, “Good! The little monsters are gone for the day,” when his daughters are kept out of the house for 12 hours straight to be the flowergirls in a neighbor’s wedding.

Home Game is an excellent companion for any harried parent ferrying their unruly charges to and from school, soccer, and various playdates: a perfectly legal, aural cocktail for the car. I listened to each chapter at least two times, the last chapter on Lewis’ vasectomy more than twice. Not just for the image of a grown man contemplating “a good ball shaving from a woman that didn’t look you in the eye”, or his description of the aftermath as his “shaved goolies”  but to be able to hear Miller urgently scream, “They’re going to cut a hole in my johnson!” again and again. Lisa Duggan

When he became a father, Michael Lewis found himself expected to feel things that he didn't feel, and to do things that he couldn't see the point of doing. At first, this made him feel guilty, until he realized that all around him fathers were pretending to do one thing, to feel one way, when in fact they felt and did all sorts of things, then engaged in what amounted to an extended cover-up.

Michael decided to keep a written record of what actually happened immediately after the birth of each of his three children. The book is that record. But it is also something else: maybe the funniest, most unsparing account of ordinary daily household life ever recorded from the point of view of the man inside. The remarkable thing about this story isn't that Lewis is so unusual. It's that he is so typical. It's a wonder that his wife has allowed him to publish it.

Michael Lewis is one of those authors I have been meaning to read, but I am tired of reading about economics and I have never liked sports. So as I was looking around for something to read, I stumbled across this in the KindleUnlimited collection.

Lewis is giving his account of the changing of the meaning of fatherhood. It is no longer ‘Father Knows Best’ but hopefully is it moving past ‘father as convenient idiot’ as well. There is a huge social shift over the past couple generations. The social science research has shown a huge shift in the number of hours that fathers have increased in house work and child care over the past 50 years.

But still there is a stereotype of the distant and/or idiot Dad. Lewis both feeds into and helps break this stereotype. He is an active Dad that cares for his kids. He also highlights some of the stupid (but real) things that Dads do.

On the positive side, he communicates well the inability of fathers to replace mothers. It just isn’t possible. Men can’t birth children or breast feed. So Dads do what they can, they care for the older children, change diapers, comfort Moms.

But there is also a lot in here that just seems idiotic. Not that any father (or mother for that matter) is perfect. I am not against showing imperfection, or pointing out the problems with the whole game (as he does when he makes fun of the Berkley birthing ideal).

Maybe I am too sensitive because I am a stay at home Dad and trying to both present that model as a normal one (no one thinks stay at home Mom are unusual, so why should stay at home Dads be unusual) and one that allows men to be good parents.

So I like the presentation of the good Dad in the recent Cheerios commercial, but I am also a bit wary of the pendulum swinging too far and presenting only Super-Dads. All Dads as idiot-Dad is bad, just as all Dads as super-Dad is bad.

So I am mixed on the book. I both enjoyed it and cringed frequently. There was humor, but it wasn’t a comedy sketch like Jim Gaffigan’s Dad is Fat. It was short and sweet (although had a final chapter on getting a vasectomy that seemed thrown in primarily for laughs and was one of the more cringe-worthy chapters.)

A Real Story of Fatherhood!

Would you listen to Home Game again? Why?

I would listen to this book again. The stories and the way they are presented makes them very easy to listen to again. I also think once I have my first child I will be back.

What other book might you compare Home Game to and why?

A book I read about ministry called Mad Hatters and Holy Fools. I feel they deal with their respective subject matter in a unique and special way.

Have you listened to any of Dan John Miller’s other performances before? How does this one compare?

No, but I have bought another one, just because he is preforming it.

The story at the pool, and riding around town looking for an empty bathroom.

This is a great book!

Wasn’t sure. Took a chance. Loved the hilarity.

I got this one on sale (a daily deal or something similar). Had never heard of Michael Lewis, don’t have kids, but the reviews seemed positive, so I gave it a chance, and am glad I did.

The stories are actually laugh-out-loud funny and the narrator is so good that my girlfriend was disappointed when she found out it wasn’t the author: Dan Miller just nailed every part of the delivery, from the hapless father to his 2 year old girls, to the secretaries at the sperme-testing lab.

Definitely recommended - I’m hoping Lewis has other material I’ll enjoy as much as this. Will definitely be checking out more of his stuff.

If this was helpful, please let me know by clicking the button below so I can continue to provide useful feedback, or improve future reviews.

A superb "you are there" memoir

This is no comprehensive guide to fatherhood, but that's not the point. It's a memoir of raising one, then two, then three children – as a well-intentioned yet awkward father capturing – in exquisite detail – the craziness of fatherhood.

If the author was not already well known for a different genre, this book would never have been published. It is not necessarily a bad book. It is just unimportant. One man’s less-than-unique experience as a father just doesn’t matter. Not worth the time waiting for the raison d’etre that never comes.

There are some vignettes in this book that are pretty hilarious. If you're a new Dad in the modern era, this is a pretty fun listen. Recommended.

It starts off somewhat slow and cynical but it gets wrapped up nicely. Great listen for new dads with another on the way.

Every American father should read this!

Great book, I know I'm not alone in the world now. any father who still has young kids should read this book.

neither helpful, nor hopeful, nor entertaining

Oh Dad. Will you ever learn?

This is a charming peek into fatherhood. As a dad I could relate to almost every anecdote explored in the novella. Very enjoyable.