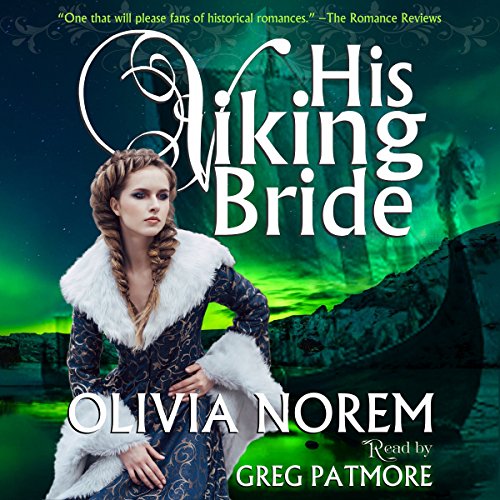 When Aestrid Karisson escapes for an afternoon of adventure, she never suspects to alter her destiny forever. Captured by Veleif Kollsvein and his fearsome warriors, Aestrid is mistaken as a slave. It isn't until they reach Veleif's stronghold that her true identity is discovered.

Determined to torment him until he returns her to her home, this vixen wages a personal war with the dark and dangerous Viking prince. When Veleif's high council decides the two must marry, he embarks on a campaign of his own.

Can the wicked heat in Veleif's game of temptation melt Aestrid's combative heart? Or will the Viking prince find himself tamed by his rebellious bride?

His Viking Bride is a love story filled with folly and challenge, wit and passion...with two iron-willed characters who share more than their explosive traits, the ecstasy of all-consuming love.

One of my favorite historical romances

First of all I have to say I loved the characters in this book! Spirited and determined Aestrid is an incredibly stubborn, yet caring character and the strong, dominant and oh- so- masculine Veleif can't help but be drawn to her. She is nothing like he has ever encountered before. Their head to head battle of wills and vocal sparring makes for an amusing and entertaining book. The little comments made by Veleif's men made me laugh several times. In addition to the great writing of this book, Greg Patmore gives an excellent performance which truly brings life to the characters. The strong voice he gives to these big Vikings was wonderful and made listening more enjoyable for me. This one is a must have for fans of Viking historical romances! I was given this free review copy audiobook at my request and have voluntarily left this review.

Prepare to be amazed!

When you press play, it’s like popping open a lovely champagne- bubbling over with effervescence and life. Within the first 5 minutes of the opening salutation, I was completely bewitched by the irresistible combination of a well- written story given sparkling animation by a truly gifted voice actor. I can honestly say this is the first time I’ve been inspired to compose a favorable review before the first chapter was fully underway (that usually happens if the audiobook is exceptionally horrid...) This title will grab your imagination and sweep you far away to the world created by the author so don’t hesitate to exchange your credit for this gem. It’s a romance to be sure, but it’s too early in the book to say how spicy...quite honestly I don’t really care since I’m so enchanted by what I’ve heard so far. I’ll be looking for this author/narrator duo with eager anticipation.

I really enjoyed listening to this entertaining tale! The story draws you in and keeps you engaged all the way to the conclusion. The author did an excellent job creating a unique story with great characters to keep you enthralled all the way through.

Narration was excellent and brought the story to life.

The only thing I could have done without is the main character being with someone else after he has met the feisty Aestrid. I prefer when the main character only has eyes for one woman. Although, this book was so well written and entertaining that I did not let this one point interfere with my final review score. I throughly enjoyed being immersed in the story and this book is well worth a credit!

Wow this book was great. It was something out of the ordinary. Looking at the cover you would think it was one of those rinkydink second hand stories with a subpar story and narrator. Well this was not the case. No spoilers here but it was a great listen, with a great narrator. Well worth the credit!!

Loved this listen! Vivid characters and story in this highly engaging listen. I got caught up in the story from the start and had trouble taking my earbuds out. Fantastic narrator, he did an amazing job of bringing the story to life with unique voices for each character. Highly recommend giving this book a listen! I received a free review copy of this audiobook at my request and I have voluntarily left this review.

I found this listen to be captivating. It is my first "viking listen" and by a new to me author and narrator. I was truly impressed by the imagery and story. I loved the added humor. I loved all of the details the author wrote in the book and thought the narrator was wonderful with all of his various character voices and accents. I wasn't certain of the direction of the book when it started, but I absolutely loved it! I requested this review copy audiobook and have voluntarily written this review. I will definitely listen to more books by this author and narrator.

I really enjoyed this one! the Viking storyline was very unique. It was exciting. the reluctant love story was fantastic. I would recommend this book!

"I was given this free review copy audiobook at my request, via Audiobook Boom, and have voluntarily left this review."
I didn't think I would enjoy this but I did.I like how the arrogance was taken out of both the H and the h.There were many lol moments in the book that tamped down the battle scenes. The epilogue made me laugh so hard I cried. Some of the interchanges were just unbelievable but overall this is worth a listen. The narrator was very good and I was able to distinguish characters throughout the story.

Truly enjoyed this fast pace book. Narrator did an exceptional job and the characters are well rounded. The story takes you on a quick lively jaunt into a highly aggravated women’s tale of loss and then into her captures lure. That soon finds her wed and bedded and waking to find she rather stay the face a life in which she is just a thorn in her fathers side. Loved the pace of the book. I received this book at no charge in exchange for for an honest review. I can honestly say it is a 👍🏻. 😻

Not only did the book have me smiling between the two characters squabbles, the narrator's voice was so charismatic and soothing. The novel was well written and sparked laughter at every corner. its not often a book has me expressing emotions allowed.