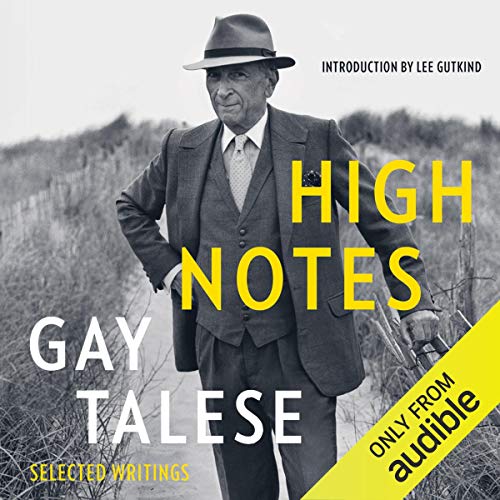 When Gay Talese left The New York Times in 1965 to write for Esquire, he brought with him a journalistic style entirely his own, which combined his literary sensibility and craftsmanship with a talent for cultural observation and an interest in American everyday life - in taboo topics and overlooked truths. During a time when the nation seemed hardly to recognize itself, Talese wrote some of the most illuminating and influential magazine articles of all time, canonical works of New Journalism, like 'Frank Sinatra Has a Cold', that elevated the form and brought to it a cachet and creativity formerly reserved for fiction.

Taking its name from Talese's 2011 New Yorker account of a revealing studio session with avant-pop star Lady Gaga and old-school crooner Tony Bennett, High Notes draws from six decades of Talese's work, from his long-form pieces for Esquire to his more autobiographical writings of the '80s and '90s to his 21st-century reflections on New York, New Yorkers, and the institution of which he is the longtime chronicler, The New York Times.

Each one of Talese's masterful books was an extension of an article collected here. High Notes will appeal to fans of those classics and to students of narrative nonfiction, a genre for which Talese has been so instrumental. The book includes an introduction by Creative Nonfiction founder Lee Gutkind.

While I love a good Gay Talese story, this narrator made it an almost painful experience. It is a cross between a robotic, emotionless voice, mixed with a monotone, that completely destroys the material due to being so un-human. That is what gay does, he makes each and every story relatable and human, this narrator, killed it all.