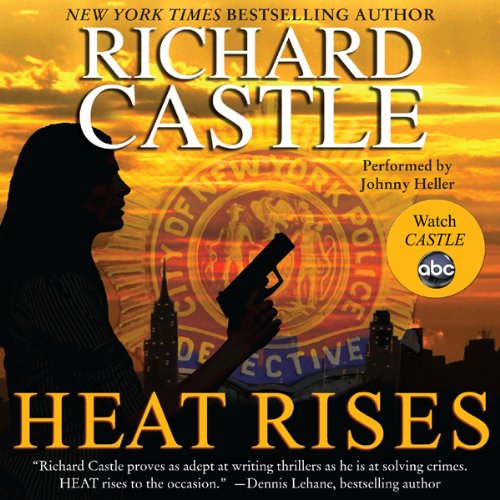 The bizarre murder of a parish priest at a New York bondage club opens Nikki Heat's most thrilling and dangerous case so far, pitting her against New York's most vicious drug lord, an arrogant CIA contractor, and a shadowy death squad out to gun her down. And that is just the tip of an iceberg that leads to a dark conspiracy reaching all the way to the highest level of the NYPD.

But when she gets too close to the truth, Nikki finds herself disgraced, stripped of her badge, and out on her own as a target for killers with nobody she can trust. Except maybe the one man in her life who's not a cop. Reporter Jameson Rook.

In the midst of New York's coldest winter in a hundred years, there's one thing Nikki is determined to prove: Heat Rises.

Another good one from Castle.

I liked this book - a lot. It is intended to be much like the TV series, and it is. If you like the TV series, you will probably like the books. A previous reviewer said it is ???fast-paced, cute, and cliched.??? He is correct; it is. He meant it in a bad way, but I mean it in a good way. I don???t think that being fast-paced or cute needs to be apologized for. If you don???t like fast-paced and cute, fine. I realize that tastes differ.

But let???s talk about his last criticism: cliched. That is always meant negatively, but the reviewer fails to acknowledge that the vast majority of genre fiction is cliched. The romance and crime fiction genres have the strictist plot constraints and therefore most frequently fall into cliche, but even the science fiction, fantasy, and literary genres have their cliches. It is true that the very best books in any genre transcend cliche, but the vast majority do not. Generally, it is not a question of whether a book is cliched but whether it does a good job within it???s genre or sub-genre. I think this book does a good job within its sub-genre.

I think that the reviewer who complained that this book was too cute and cliched perfers the sub-genre of crime fiction which is darker and meaner. He was looking for Noir and this wasn???t it.

I wish I knew who was really writing these books, because if I knew, I would go out and buy his other stuff.

Heat Rises is Book 3 in the nine novel Detective Nikki Heat. The series which is of unknown authorship, is based upon the ABC Castle TV series. In the series the fictional Richard Castle is a writer who, with the mayor's permission, follows Detective Kate Beckett around supposedly looking for good modern detective plot ideas. The best genre is likely cozy mysteries.

Yes!! and I have recommended it. If you like the TV series or if you like murder mysteries, this book is a fun read. The characters are so similar to TV that you can picture them but they aren't the same. Its a quick read and I will read the series again sometime when I can't remember how it goes anymore.

Story line was classic and full of twists. loved the performance! a perfect commuter book series for me.

An intriguing story for Castle fans.

What did you love best about Heat Rises?

I played Heat Rises on some long drives and found it so captivating that I was tapping "go back" to replay something, and there I was , sitting in my driveway wanting to hear what happens next when I made it home. I love the ABC series, and find this novel much better than the earlier Heat Rises and Heat Wave. With this one, either I have become familiar with Johnny Hellers' voice and narration, or I have found the story more compelling, better written and full of interesting crime sleuthing. I think that it is a very good story for Castle fans and leaves you wanting to find out what happens in the fourth novel. It parallels some of the tv episodes, where you can see where Richard Castle got the backround, and it is toungue in cheek as you go along. Also you can see the repore build , the trust between Nikki and Jameson Rook , much the way you can on 4 yrs of tv's Castle.

Would you recommend Heat Rises to your friends? Why or why not?

Yes, especially share with my friends that love Castle. You feel part of the story because of the charactors personalitys on tv.

Grows on you. You do recognize all his voice dilections when he speaks of the charactors, and gives them a personality and can see thier mannerisms, much the way they act on tv.

Look forward to the next novel, Frozen Heat.

The narrator fits all the characters, each distinguishable & suiting. Flows. The cadence/ tempo of the reading is perfect & the author has an intuitive & continual natural unfoldment of the story with unabashed humor mixed in with action, violence, romance. Has nuance.

This is the third, and probably best so far in the Nikki Heat/Richard Castle series. As with the first two books, it starts slow but becomes more interesting towards the end. I’d give the first half two stars but the second half three stars, so three overall. I find that I don’t care much for the wisecracking, glib writing and the characters are completely undeveloped. If you aren’t a Castle fan, you’d have no investment whatever in the characters. I will say that the ending was very unexpected and couldn’t be foreseen. All in all, only consider reading this if you are a big Castle TV fan. Otherwise there are much better books to read.

Another hit for Castle

I enjoyed the third installment of this series very much. Hopefully you will as well.

the book it's self is a good book but the narrator is horrible. ruined the whole book for me.

If you like the show you will love this book. Same characters just different names. Copied from more than inspired by castle....lol