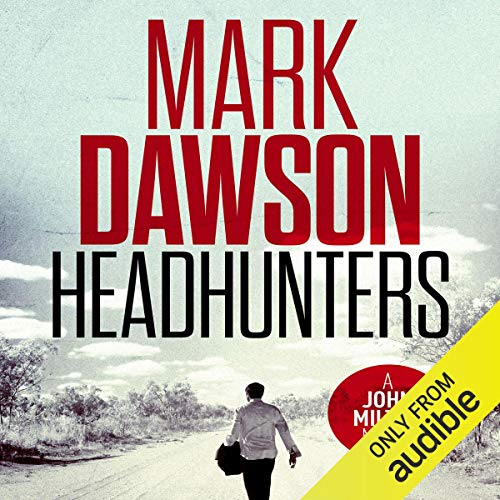 Bury your enemies, and bury them deep.

John Milton thought he was done with Avi Bachman. The most dangerous man he's ever known has been incarcerated in Angola, the brutal Louisiana prison. Inmates rarely leave Angola. Once you go in, the only way out is in a box. But Bachman is no ordinary prisoner. He was an assassin for the Mossad, and he has favours to call in.

Milton is in the Australian outback with an old friend and his flirtatious kid sister, looking for a summer’s peace to put his troubled mind to rest. But Bachman has other plans. He thinks that Milton killed his wife, and now he wants revenge.

From Australia to Israel, from Hong Kong to Croatia, here is the conclusion of this brutal chapter in Milton’s life. The two headhunters are on a collision course, and only one of them will walk away. Don’t start this audiobook in bed - you will lose sleep.

Mark Dawson has worked as a lawyer and currently works in the London film industry. His first books, The Art of Falling Apart and Subpoena Colada have been published in multiple languages. He is currently writing three series.

The John Milton series features a disgruntled assassin who aims to help people to make amends for the things he has done.

The Beatrix Rose series features the headlong fight for justice of a wronged mother - who happens to be an assassin - against the six names on her kill list.

Soho Noir is set in the West End of London between 1940 and 1970. The first book in the series, The Black Mile, deals with the (real-life but little-known) serial killer who operated in the area during the Blitz. The Imposter traces the journey of a criminal family through the period; it has been compared to The Sopranos in austerity London.

In Mark Dawson's just released John Milton Book 7, an Aussie lass named Matilda plays a major part. The fight between Milton and rogue ex-Mossad super agent Avi Backman that began in Book 5 finally comes to a conclusion. I love Dawson's John Milton series, his Beatrix Rose series, and the recently begun Isabella Rose series. Headhunters does not disappoint. The one criticism I have of the audiobook is that it is too wordy; it should have been 8 hours rather than 11.5 hours. Mark Dawson writes great thrillers!

VERY HIGHLY RECOMMENDED!! But listen to the earlier books first.

Love the John Milton series, hopefully more to come! I would like to hear more of the Ziggy, Matty and John team.

This story picks up right where Book 6 ended--Avi Bachman is out to get John Milton and will chase him to the ends of the earth for revenge. But this shows the difference between the two men. Our man is the more honorable. Milton just wants to be left alone. He introspects on his life in terms of love, relationships, addictions, and justice. This is what makes him a moral killer and not just a sadistic sociopath.

There is plenty of action and plenty of detail, just what you would expect from Mark Dawson. Great story! And David Thorpe does his usual fantastic job with the myriad of voices and accents.

Glad Avi is gone. Too much focus on him two books in a row. Also I get the want to highlight AA but it is too much of the story lately. Focus on story and AA piece can be a good slight reminder throughout.

At about 80 or 85% I was tempted to stop reading this book. Unfortunately, I couldn't throw my iPad when the author did something stupid and when John Milton, an assassin and all around killer, told Ziggy and Matty to leave town because he was going to meet the insane killer and he wanted them safely out of town. Well, guess what? Matty wasn't going to leave she was going after John, in case she could help him. OMG, how could the author have written something soooo stupid. AND you know Ziggy wouldn't let her go alone, and so they got caught by the insane bad guy, at which point I wished both of them would have been killed. This book lost 2 stars because of that stupidity**********

As for the narration: Always a good job by David Thorpe.

The author has written another fantastic novel, full of intrigue and suspense! The narration is superb, bringing the characters to life!

Another great book that was beautifully read. Now to find the next in the series. I'll catch up eventually!

The action starts when John Milton and a friend’s sister, Matilda, are abducted by a team helping John’s most dangerous enemy, Avi Bachman. Bachman is the one person that scares John. When John and Matilda, escape, they begin a multi-country flight. John knows he must eventually face Bachman.

Once again Mark Dawson holds your attention with a riveting John Milton story. He weaves together a nice cast of characters with the return of Ziggy and Bachman. Great book all around. it will definitely bit disappoint.

This is a great series to burn through If u like this genre ie: Vince Flynn, Barry Eisler, Ben Coes etc