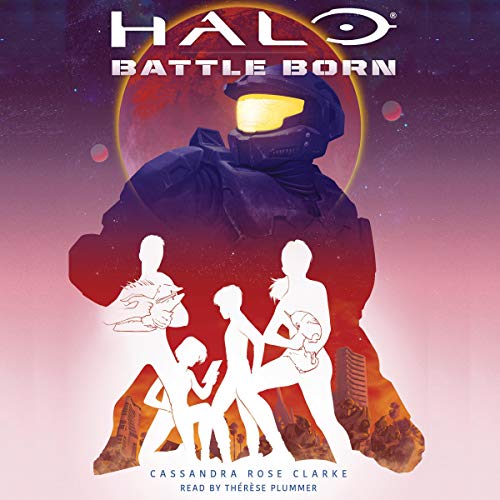 Saskia, Dorian, Evie, and Victor aren't exactly friends at their small high school on the middle-of-nowhere colony world of Meridian. Each has their own problems, from absent parents to supporting their family, getting into a good college to making the next hit holo-film. But those problems were nothing next to the threat now facing their world: The alien alliance known as the Covenant is laying siege to Meridian, for reasons that aren't so easily explained.

With their village in flames, the four teens find themselves stuck aboveground, locked out of the town shelter where the rest of the survivors are gathered. Together, Saskia, Dorian, Evie, and Victor are thrust into battle with nothing but a few scavenged weapons and an injured Spartan, one of the UNSC's super-soldiers. What's forged from the destruction will determine the fate of Meridian, and tilt the battle for humanity's survival.

It was a decent story line. Unfortunately if you've read the majority of the halo novel series, especially the older ones like ghosts of Onyx, and contact harvest you may take some time to adjust to the new style of story telling.

The first time I have actually disliked a Halo Book.

The lady that reads the book is constantly whispering, I can’t understand what she’s saying half the time. The story is extremely weak not a lot of action just always hiding and sneaking around not what I expect a halo book to be. Disappointed

I have read every halo book through many times, and have all that are available on audiobook. These I listen to most of the time while driving and love them. That said, I could not even finish this audiobook. The narrators consistent need to sound like she’s trying to whisper a child to sleep, appalling attempts at correctly timed inflection, and frankly offensive rendition of a male voice make this awe fun to listen to. Every action section or male character sounds like an attempt at satire. If you want a good female narrator, listen to Halo: Renegades. She understands what a book like this should read as.

story was well written but

the story was well written but the narration was so whispered I had to turn my volume all the way up and still had trouble hearing sometimes.

The narrator whispers half the time for no reason. At first it was only during exposition, but then she’d switch from whispering to normal voice mid-exposition. Totally distracted from the story and mood of the narrative.

The Narrator just ruins the mood at times. Sounding silent or whispering the entire time. She doesn't feel right for the story. She is basically too hush!

Great Story not so great narration.

I really enjoyed the story just like all the other halo books. The only thing I really couldn't stand about this book was the narrator. When she spoke normally and did voices she was fine but reading the whole book in almost a whisper was really hard to listen to. I'm not sure why she didn't just read normally and then add the voices.

The story was well written. its a sub storyline which takes place withen the halo universe. happy i spent my credit on this one. i would love to see it continued.

loved it couldn't believe what had happened and owen was one of the best Spartans.

Excellent book, even as a YA

This may be a novel with an intended audience of young adults, but that doesn't mean it isn't a good book. All Halo fans would greatly enjoy this novel. It has an excellent story with some new characters and provides a different perspective on the covenant war. The reader was quite good as well, my only complaint being little variation between male voices, which I recognize is likely difficult as a female reader. I would definitely buy it again, I enjoyed it thoroughly.