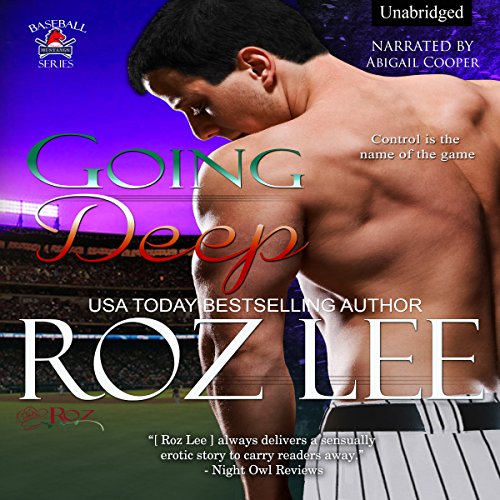 Keeping Carrie blindfolded and in the dark as to his identity suits Major League catcher Jason Holder just fine while he figures out if being a Dom really is his thing. With the media circling like vultures as he works to get his career back on track, the last thing he needs is a sex scandal if things don't work out. Just when he's got it all under control a new kind of scandal from an unexpected source threatens everything, and Jason soon finds out that what you don't know can hurt you.

My ears are so Hot they are on fire Mmmmm

As the first book (Inside Heat) i listened to by Roz Lee i thoroughly enjoyed this listen. This story is about Jason and his new found Submissive Carrie. It is a very mild B&D story that has loads of yummy sex in it. Jason is pure Hot dominant male and i like his sexy voice that is portrayed well by Abigail Cooper's narration. Roz has an easy flowing style to her writing that i find irresistible. I'm so looking forward to more stories from the Mustangs Baseball series and hope there are many more to come.

The story is about Jason Holder, an older professional baseball player, coming to terms with his sexual preference to dominate a woman and learning what he likes and the how-tos of that scene. His lessons began by way of his friend, Todd, introducing him to a local sex club, The Dungeon, where Jason could practice and learn about "the lifestyle." Todd connects Jason with a friend of his sub named Carrie. Carrie is a journalist focusing on a story of steroid usage in sports. She is inexperienced in BDSM too, having had 2 past sex partners and having acted as a sub only once when she joined her friend and her friend’s dom, Todd. So both Jason and Carrie were novices to “the lifestyle.”

To keep things between them limited to their dom-sub relationship after hours, all of Jason's and Carrie's first encounters occurred at The Dungeon sex club. And to keep his anonymity, Jason insisted that their first encounters occur with Carrie blindfolded. No preliminary checks for diseases occurred before they started to have sex without a condom. This was especially strange when the author then began to have Jason use a condom near the end of the story. So the author was not consistent in her portrayals. Their sub-dom relationship was uninteresting since the sex was boring to me. Jason seemed to use any excuse to “punish” her. Though, he was also attentive and caring in some ways. But since this was a bad story with a bad narrator, it didn’t matter b/c the bad outweighed any small amount of good in the story and narration. Though the story was a FSG (Fifty Shades of Grey) copy-cat, it had some different parts. One is how they made their way to actual intercourse. Another is how he wrote on her with a marker to literally “mark” her as his and some foot play. But it didn’t matter b/c I don’t know if I’ve ever been sooooo bored by sex scenes in a story. For me, that’s saying something because I have listened to a lot of romance and erotica. But, with this story, I quickly began to fast forward through the vast majority of sex action in this story, and it was a lot.

When not having sex, the parts of their lives shown outside of “The Dungeon” were very limited and always apart from each other. So, for Jason, listeners heard about him playing baseball and, occasionally, talking to his brother and his brother’s wife, a woman both of them used to have sex with together. His brother was a baseball player too. And for Carrie, we heard about her working on her steroid story.

This story fell into the common trap of love or something like it being said to be present way too soon. Lust and attraction, even very strong lust, makes sense in this story. But in this story, after engaging in only sexual acts—not always intercourse—4 times, both Jason and Carrie began to contemplate how much they cared about each other and how much they felt cared for by the other. By that time, they didn’t even know each other’s names or who each person was outside of The Dungeon. Neither had they been together in any way but sexually or even talked about anything outside of sex. In other words, they, in no way, even remotely knew each other.

This story focused more on Jason, so the way the author chose to describe Jason’s vulnerability near the end of the book was disconcerting. It was so different from how Jason was shown to be prior to that point that it didn’t make any sense. The change and supposed revelation had no real basis. That seemed to be a major struggle in the book, the author’s inability to have information flow in an order that makes sense. At different points in the story, info would be dropped and the timing of it would seem strange and would’ve been better placed after or before something else already revealed.

The story was very mediocre, but the narrator was horrible. She ruined this already mediocre story. The narrator said everything so matter-of-factly that it didn’t work well for the many sex scenes and the great amount of sex talk. It all came across as bland. But worst of all is that the narrator sounded like Marcie, from Charlie Brown, the character who says “sir” at the end of every sentence. Her narration, especially of Carrie, since she always saying “sir,” took this mediocre story to the crap pile.

Since I thoroughly enjoyed the 1st book, I was looking forward to the 2nd in this series about major league baseball players. In Inside Heat, twin brothers Jeff and Jason have an 18 month relationship with Megan. The twins treated Megan with gentleness and respect until Jeff & Megan fell in love, leaving Jason alone.

In Going Deep, Jason changes into a self-absorbed, sadistic asshole who enjoys inflicting pain. This transformation starts when a Dom friend offers to share his Sub for a night. When Jason agrees to batter and abuse a woman he just met, a controlling jerk is born. And don't get me started on the "friend" who pimped out his girlfriend. What a prince!

Jason is introduced to Carrie, a supposedly intelligent, professional woman, who has no self respect or common sense. What rational person would allow a total stranger complete control of her physical, mental and emotional health? It was painful listening as Carrie volunteers to be degraded and humiliated.

It was also creepy hearing Jason rationalize his abusive behavior because "other people are doing it too: In our modern world, overrun with terrorists, serial killers, rapists and pedophiles, does the lame excuse "everyone else is doing it" really justify bad behavior? Even though Carrie is a willing victim, I'm appalled when exploiting people is trivialized.

Needless to say, I did not finish or enjoy this book, wishing I could clean my mind of the disturbing images. While I realize there are many more graphic novels on this subject, this attempt to portray Jason as a romantic hero is scary.

This book isn't a literary masterpiece, and it isn't gut wrenching, and it isn't suspenseful, it is what it is. It's a bit fluffy, not much depth, but it's got some heat to it.

I actually liked this book because it wasn't deep..contrary to the title. There was a bit of contrived drama, and odd behavioral changes just for the sake of continuing the story, but when you are looking for a book that has some heat, but isn't way out there with the hokey and isn't edge of your seat suspenseful, this one will fit the bill nicely.

This is book 2, but it could be a stand alone. Jason is the catcher on a MLB team and in the last book he and his twin brother shared a woman, who eventually became his brother's wife. That was fine with Jason, he didn't really feel that way about her...actually he has a hard time feeling much for a woman because he tends to be overbearing, demanding, and basically domineering, but he thinks that shows he cares...and the women he has been with really aren't into it. When he confides in a teammate about his women troubles his teammate takes him to a club...a BDSM club...so Jason can explore his inner Dom...and boy does he!

As for the narrator....grrrrrrr....this chick always gets on my nerves. She doesn't have much inflection, it's hard to tell one person talking from the next person, and she speaks at about 0.5 speed, and sounds like a 13 year old girl while doing it. Not REALLY what you want to hear during a steam scene. Overall though I think the book overcomes the narrator's short comings.