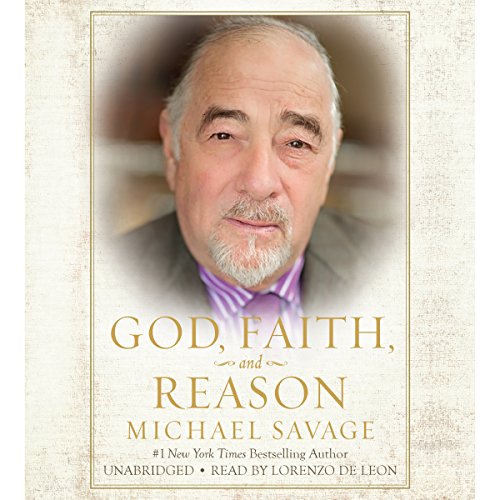 For decades Michael Savage has been preaching his political faith of borders, language, and culture to millions on his nationally syndicated radio show, The Savage Nation. Now Savage gives his audience a look into his religious faith and his ideas about the Judeo-Christian foundation of the American culture he has fought all his life to preserve.

But rather than a dry, theological treatise, Savage provides something more akin to an ancient mystery text. Drawing on Christian, Jewish, Buddhist, and other spiritual sources as well as autobiographical material and highlights from his radio show, Savage shares a series of glimpses of God he has experienced over the whole of his life, before and after his groundbreaking radio career.

Moving childhood stories, his dinner with an atheist and a Buddhist, an interview with a Jewish gangster, and Savage's reflections on selected passages from ancient scriptures are just a few of the eclectic group of experiences and insights Savage shares in what is easily the most unique book on spirituality in decades. From his days as a boy growing up in New York City to many years searching for healing plants in the South Seas to his current incarnation as one of the most popular talk radio hosts in the world, Savage has been haunted by glimpses of the divine and struggled to find their meaning.

Rather than trite, orthodox answers, God, Faith, and Reason presents the listener with one man's perceptions and consideration of the daily presence of God in the world around us and how the search to find God is the finding itself.

Michael needs to narrate his own books

I loved the book and would buy his other books but I won't because he IS the voice and it's only obvious his listeners would want to hear his words from him. The narrator was great and did an excellent job but it's a no brainer here.. we want to hear Michael when audible listeners read his books!!

Great book by Michael Savage. I’ve been a listener of his for over 15 years and like many of his fans, consider him a kind of uncle. This book accounts Savages search for G-d as many of us do. My favorite part of the book are the biblical quotes and his explanation for why we can’t “see” G-d, which I thought was a genius observation.
Also, I listened to the Audiobook version and feel I missed out on the physical book. I would have liked to save some of the biblical quotes so I may go ahead and buy the book as well. The narrator did a very nice job and it was a very hard job considering that fans expect Savages distinct voice...but he did a good job nonetheless. Thank you Dr (Uncle) Savage for sharing all of your wisdom. I think like many of your fans I enjoy when you talk about subjects beyond politics. Keep up the great work!

A lot to ponder

Love Michael. It was hard to follow at times but correlating scripture with life experience is always interesting. A thought provocative book

Dr. Savage is the voice
that America needs to hear more than ever. I️ listen to audiobooks at work but I’m buying multiple copies as CHRISTMAS gifts to friends and family. God bless Dr. Savage

I like Mike writing about things other that the normal political theater!
Good listen, I wish it was in Mikes own voice but I learned enough to enjoy it.

Well done manuscript connecting biblical truths with everyday struggles. The narrator was outstanding! I listen to Savage most days and enjoy his bombastic personality....but, I do hope, as he is in his twilight years, he resonates with the idea that his audience can infuse him with understanding and this translates back, readily it seems, to his work like this text.

Not too much, not too little

I really enjoyed this book and Dr. Savage’s bible perspectives. This came across as very genuine and not preach. I also learned quite a bit. I recommend this book.

loved this book. thought provoking .exposed liberal agenda against Americans. why is there a word min8mum.

I hope to be more inspired by this book. I am not a true fan of Mr. Savage so maybe I wasn’t the target audience. Some of his stories and insights were interesting but it was a bit of a chore to finish the book.