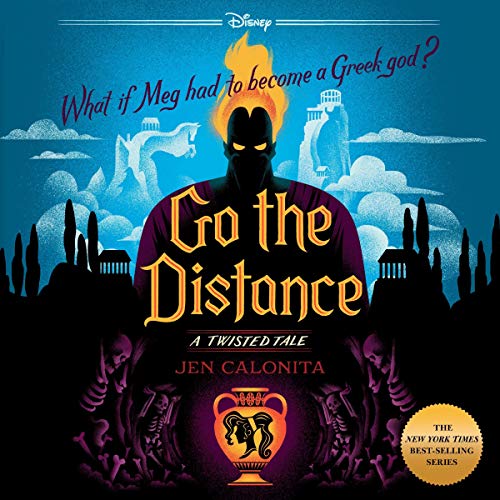 The 11th installment in the New York Times best-selling A Twisted Tale series asks: What if Meg had to become a Greek god?

After Hercules proves he's a true hero and regains his godship, all seems right in the world. That is, until Zeus tells Meg that she can't be with Hercules because she's, well, mortal. Luckily, Hera has a solution, offering Meg a chance to prove herself worthy of a spot on Mt. Olympus - as a god. All Meg has to do is complete a mysterious quest.

The mission? Oh, just to rescue her ex's current wife from the Underworld. The ex-boyfriend she saved by selling her soul to Hades. The ex-boyfriend who immediately moved on to someone else while she was stuck in the Underworld. Can Meg put her past behind her and use her quick-wit to defeat monsters and gods alike, including the nefarious Hades? Will she finally figure out her place and contribution to the world? Or will her fear of commitment have her running away from an eternity of godhood with Herc?

Written by the author of Mirror, Mirror and Conceal, Don't Feel, Jen Calonita's latest twist is sure to delight and surprise.

Disappointing. Who is this character?

I wanted to like this book, especially after hearing so many people say they loved it. Hercules is one of my favorite Disney movies. But this book was just... not good. Considering it's supposed to be a "continuation" of what happened at the end of the movie, the details of Meg's life and her relationships with Hercules and Hades are not consistent with what we know, which bothered me to no end every time something didn't follow the movie. Meg is supposed to be sassy, tough, and resourceful. I don't know who the Meg in this book is; she is not logical or witty, she is impulsive, and she spends way more time focused on Hercules than she does on why she is trying to complete her quest. It does not help that it seems like the narrator saw Hercules once as a kid and went, "Yeah, I can do those voices." Meg sounds like a valley girl, and most of the male characters all sound the same (even the same bad New York accent). For some reason Phil calls her "Red", even though he never called her that in the movie, and she calls Pegasus "Peg". There is also a huge overuse in the beginning of the nickname "Wonder Boy", I was considering taking a drink every time it popped up. I even had to stop listening to this for several weeks before deciding to power through it. I'm glad some people enjoyed this book, but I am not impressed with it at all.

Just the fact there's a story of an alternate ending caught my eye.
You won't be disappointed

very well read. Love the different voices.
Keeps in interested through the whole story!!
Would listen again and again

everything over all was amazing. loved it all. if you love Hercules, you'll love this.

A continuation of a beloved movie

The narrator did a great job making the voices different from one another. I loved the sassiness of Meg you see in the movie come out in the book. If you enjoyed the animated version of Hercules then you will enjoy this too. It was interesting to see how the author created different scenarios. There was clear foreshadowing as you ask yourself why do they keep mentioning that, but that was part of the fun you didn't know what was coming, but could make predictions. I enjoyed it. Good clean fun.

The story was amazing. It was a a great what if… Amanda did a great job bringing the story to life with her words!

**3.5⭐️**You never get to see how your favorite Disney stories ended. I love that we get to see Meg’s story continue as she embarks on her own hero’s journey.

Meg thinks she has to complete this quest alone, but quickly realizes that the true quest is about asking for help when needed and opening your heart to those around you.

Throughout the quest, Meg tries to figure out if she truly loves Hercules and is prepared to spend eternity with him.

It is only once she’s losing him does she realize her true feelings. Although she did not complete her quest in the given amount of time, Meg makes such an impression on Hera that she becomes a God anyway.

I loved the story and seeing Me push through all her worry and insecurities. The narrator is great, but doesn’t really give off the proper vibe for Meg. I missed the low, sassy drawl of the Disney movie.

Other than the narration, I would still recommend this to anyone who enjoyed Hercules as a child.

Better story than was written and narrated.

The idea behind the story itself was great. But the writing was not good.

Hits on Every Level

Lets start with the fact that the narrator sounds almost exactly like Meg. Her Hades is pretty good, too. She really brings the story to life. And what a story it is. You'll be spellbound as you listen and I always want to know what's happening next so I listen while I clean the house or cook. House looks great and I've saved a ton on fast food.

I saw a lot of “where is the spunky Meg” she is still here. Her character is just built upon and flushed out perfectly