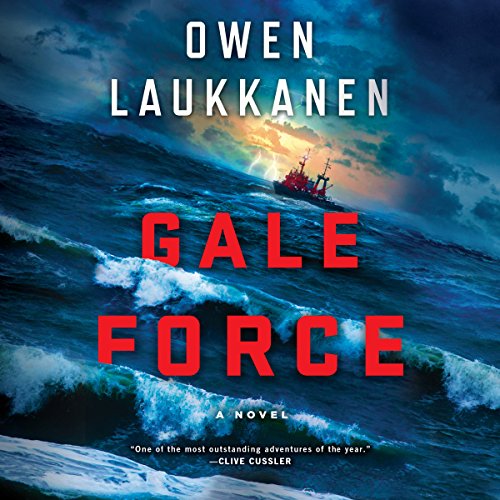 For all lovers of maritime adventure comes an electrifying thriller of treachery and peril on the high seas featuring a dynamic new heroine, from multiaward-nominated suspense star Owen Laukkanen.

In the high-stakes world of deep-sea salvage, an ocean disaster can mean a huge payoff - if you can survive the chase.

McKenna Rhodes has never been able to get the sight of her father's death out of her mind. A freak maritime accident has made her the captain of the salvage boat Gale Force, but it's also made her cautious, sticking closer to the Alaska coastline. She and her crew are just scraping by when the freighter Pacific Lion, out of Yokohama, founders 200 miles out in a storm.

This job is their last chance - but there is even more at stake than they know. Unlisted on any manifest, the Lion's crew includes a man on the run carrying $50 million in stolen Yakuza bearer bonds. The Japanese gangsters want the money. The thief's associates want the money. Another salvage ship, far bigger and more powerful than Gale Force, is racing to the rendezvous as well. And the storm rages on. If McKenna can't find a way to prevail, everything she loves - the ship, her way of life, maybe even her life itself - will be lost.

I really really like Owen Laukkanen's Stevens and Windermere series so I was very curious to see what his new stand alone book would be like. In my opinion this is a first rate maritime thriller! The publisher's summary gives a great overview of what to expect. The protagonist McKenna Rhodes and the crew hand picked by her deceased father set out on a salvage mission to rescue a horribly listing freighter off the coast of Alaska carrying 100 Nissan cars. There are millions at stake and the fee Rhodes would get would more then save her company. The antagonist are weather, the ocean and Japanese organized crime. Karissa Vacker does an excellent job narrating. HIGHLY RECOMMENDED. If you found this review helpful please indicate so. Thank You.

Not a waste of time

Gale Force was predictable but over all it kept me involved and it was enjoyable.