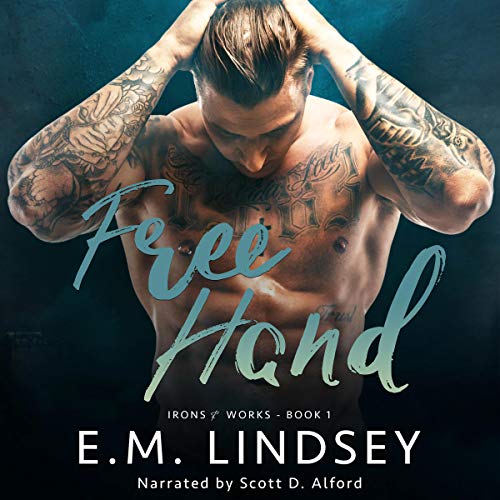 Derek Osbourne’s life is mostly quiet. A routine that keeps him functioning, a job as a tattoo artist that keeps his rent paid and food in his belly, and if he’s alone through it well, there are worse things to be.

With his complicated past, Derek is sure no one would ever want to deal with the struggle that comes along with loving someone who has severe PTSD. Especially since the man who spent years abusing him is now in hospice, and Derek has taken over his end-of-life care. Derek’s resigned himself to living and dying alone, and maybe that’s okay.

Then one night, during a raging storm, Derek finds himself stuck in an ATM vestibule with a quiet stranger, and it’s in that moment his world begins to change.

Basil Shevach is new to Fairfield, taking over his dead aunt’s florist shop. He’s also Deaf in a small town, where he and his sister are the only ones not hearing.

It’s not to say he hates it there, but he’s not sure Fairfield is the place for him. At least, not until one night, when a storm leaves him trapped inside the bank with a man quietly panicking against the glass door.

He’s immediately intrigued by this unbelievably attractive stranger with bright tattoos covering his arms and haunted eyes, but he’s also bitter because he’s dated a hearing man before and it ended as badly as it could go for him. He had resolved years ago to never make that mistake again, but somehow, the frightened man trapped with him in that little room, crawls under his skin and no matter what he tries, he can’t seem to shake him.

Will the two of them be able to find their way together, or will their pasts prevent them from being able to find happiness and contentment when they need it most?

Free Hand is the first book in the Irons and Works series. Each book contains an individual story line with no cheating and HEA.

Derek is a tattoo artist that has survived a traumatic and abusive childhood, with a few issues including PTSD. Basil, a local florist who is deaf is not interested in adapting to the hearing world, after an ex mocks his disability. When Derek gets locked in an ATM vestibule during a rain storm, the last thing he wants is for his PTSD to kick in, but Basil is there to help distract him and help him through. After they get out, both men feel a connection, but can they work through their pasts to come together? WOW!! This book was absolutely AMAZING! First, I totally appreciate that the author put in a note requesting that the reader take their own mental health into consideration prior to reading this book as it deals with some difficult topics. I appreciate that the author cares more about the readers than the money received by purchasing this book! Getting into the actual book, the characters were so well written! Both primary and many secondary characters are ones that are dealing with disabilities and the author writes them with such care and true acceptance. As a person with a disability, it’s nice to see not only characters with disabilities (especially in the LGBT community), but ones so well written. I truly cannot wait for the rest of this series!!

I really liked this book when I read it the first time around. But, After Listening to the audio I fell so much harder for Derek and Basil. There's just something about the two of these guys that's extremely endearing. I really appreciated all the hard work and details that E.M. Lindsey put into this book. You can tell in all of the smaller minute details that you don't really think about, but are noticeable in this book, especially when it comes to the disabilities and hardships the characters of this series are faced with. It's not angsty, but at the same time its not smooth sailing for any of these guys either. When it comes to the audio version. I was really impressed with Scott Alford's voices for these characters. I think I was most nervous about Basil being that he was Deaf, and non-verbal, I wasn't sure how his "voice" would be captured. But, Scott's voice for Basil was perfect. I enjoyed every part of this audio. I really do hope he narrates the rest of the books in this series, and even if he doesn't, I will still look forward to hearing more from him in the future.. Derek is a tattoo artist and a twin. He and his brother Sage have dealt with a lot growing up, but both men were able to make something of themselves even with all the turmoil and what they had to go through. They both have some lingering issues they need to deal with along the way in this book, but overall you can tell that Derek loves his brother and friends that he calls a family, he would very obviously do anything necessary to help his family in times of need. Even to the point of taking care of his dad who is a horrible, horrible person. Basil was born deaf, he and his sister own the flower shop in town. Basil meets Derek by chance, and the two form a tentative friendship while Derek learns Sign Language and Basil learns to trust Derek. I'm glad that the trust between these two guys didn't come easily. That they both had to work at it, coming from different angles and different experiences in life it made it a lot more believable as a story. I really did enjoy this book a lot.

This narrator had very little emotion while telling the story. The way some of the characters are described you expecting them to sound a certain way but was none of that. honestly some parts I zoned out because the reading was just not that great. the story itself wasn't that bad, so I just suggest reading the book and not the audible. Also, he pronounced Moana wrong!!!

This audiobook took me a long time to finish—longer than I had planned originally. I will admit that part of the initial disclaimer at the beginning made me a little nervous to delve into it. I’m not a fan of angst or dark themes and it wasn’t something I necessarily picked up from the blurb, but I anticipated a tough, teary, emotional ride and that’s just not my thing. I didn’t want to feel like I’d been through an emotional wringer by the end. With that being said...I absolutely loved this story. The disclaimer is a lot scarier than the book turns out to be—yes, there is mention of abuse but it wasn’t anything that was played out scene by scene. It was emotional, but in a very good, good way—I promise! There are so many situations in this book that could set both Derek and Basil up to hurt each other—they both are dealing with major issues and the potential was there for them to take out their suffering on each other in a variety of hurtful ways. I expected it...and braced myself for it...and stopped at one point because I was sure it was coming—and it didn’t happen! Holy buckets, both Derek and Basil were so sweet and their love story was downright beautiful without having misunderstandings (omg, EM Lindsey, THANK YOU) and pushing each other away all the time. I just could not have been more relieved by the way this story went. Another thing that originally made me leery was how many characters are introduced right away. That always runs the risk of too many people being around that aren’t necessarily necessary to the story and I am so thankful this was not the case. Every single character was well-fleshed out. Some of them were minor in the story, but the ones that weren’t fit into it perfectly and I didn’t have to ask myself “Wait, who is this guy again?” fifty million times. I cannot say it enough...this audiobook is the bomb and that bomb blew my preconceived notions about how this book would go out of the water. This is also my first book with Scott Alford as a narrator and it was amazing! New-to-me author and new-to-me narrator was a complete win and both will be added to my “must-have” list. Great job, guys—you made a believer out of me! I was given this free review copy audiobook at my request and have voluntarily left this review.

So I Loved reading this book, when it came out in audio I was super excited to experience it in a different way. I really enjoyed this new to me narrator and thought he really brought Derek and Basil to life. This story is pretty angsty but there wasn’t a point that I felt that I needed a “break” from listening to it. In fact I listened to it in one go with minimal pausing. I honestly can’t wait for the next book in the series, this author has become an immediate one click for me. If you like authentic connections, chosen family, and side characters that attempt to steal the show....then this is def something you’ll want to spend a credit on!

This is the first book I’ve listened to (or read) from this author and I really enjoyed it! I’m impatient so I’ll have to read the rest of the series.

The other will be there to reach out a hand! 💖🥰💖 This story was so beautiful! I love Derek and Basil. The author did an amazing job explaining the trials of everything both of them were going through. I loved that the book was more focused on the story rather than intimacy. The sex was hot when it happened, don't get me wrong, I'm just happy that it was later on and I had a chance to learn a lot about all of the characters. I also really adored Sam's story and all of Derek & Basil's friends/family. I can't wait to listen to their stories and it was awesome that the side characters felt just as important as the main characters. I also really enjoyed the narration, Scott has a beautiful, calming voice and I could listen to him all day!!!

I’m a huge fan of this series. This was a new to me narrator and he did a good job!

I loved this story. I appreciated and learned something new with the explanation of the Deaf community. I really related to Derek because I was diagnosed with PSTD from verbal abuse from my dad. I haven't met anyone else with this diagnosis so it felt validating. The family that Iron and Works has created and the acceptance they all have for each other is beautiful. I wish more people could have that type of support and understanding. "What mental health needs is more sunlight, more candor, more unashamed conversation" -Glenn Close The narration was great. Scott Alford is a new narrator to me and I think that he did a great job. The heat level is low and it was a bit of a slow burn.

I absolutely adore this series and the audio is amazing. I had not heard this narrator before so I was fully shocked at how much I enjoyed the narration. I am rather picky about a narrator taking on a favorite book but this one was great.