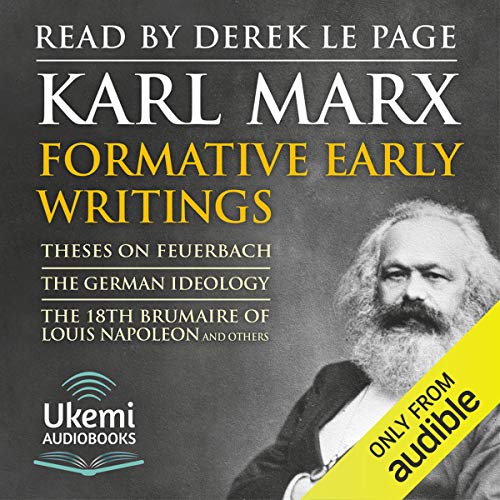 Though Karl Marx is best known for Capital and The Communist Manifesto, his revolutionary thoughts and ideas had developed over decades spent in study, discussion and association with a variety of organisations throughout Europe and the US, intent on challenging the establishment order.

These six very different texts show how Marx’s ideas evolved and how increasingly fierce his views became. In A Criticism of Hegel’s Philosophy of Right (1843) (only the introduction was completed), Marx proposes that the working class has a key part to play in the redemption of humanity. This short work contains one of his most famous epigrams, his criticism of religion as ’the opium of the people’.

His growing concerns for the material and economic conditions under which the mass of the population live were revealed in On the Jewish Question (1843), in which he declares that it is not religion that alienates people but their living conditions.

Marx had been influenced by early views on materialism by - among others - Ludwig Feuerbach, but in the 11 short comments contained in Theses on Feuerbach (written in 1843 but not published until 1888 by Engels), Marx made it clear that it was necessary to go past theory and invest in practical activity. As he declares in the last comment, ‘Philosophers have hitherto only interpreted the world in various ways; the point is to change it.’

The German Ideology (1846) was another polemic against philosophers in which Marx - and Engels - could also propose their view on world history: ‘Morality, religion, metaphysics, all the rest of ideology and their corresponding forms of consciousness, thus no longer retain the semblance of independence. They have no history, no development; but men, developing their material production and their material intercourse, alter, along with this their real existence, their thinking and the products of their thinking. Life is not determined by consciousness, but consciousness by life.’

The 18th Brumaire of Louis Napoleon (1852) shows another side of Marx the writer: the historian. But in relating the French coup of 1851, when Louis-Napoleon became dictator, Marx wrote from his platform of increasingly strong views on class struggle and the capitalist state.

The Critique of Political Economy (1859) effectively previews Capital - but of particular interest here is the preface, in which he gives an account of the development of his philosophical, political and economic views and his materialist approach to history.