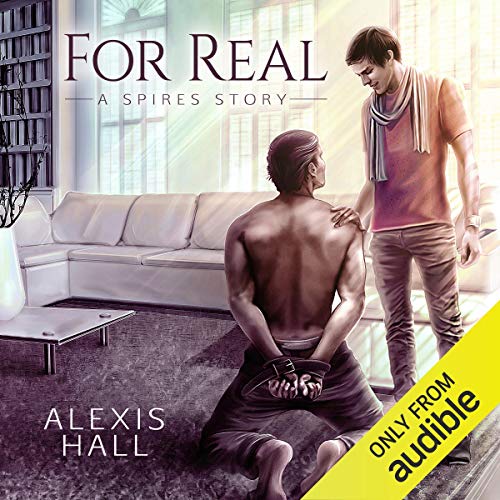 Just picture me screaming into the abyss forever

Yes. Everyone. Forever.
Why? Because its a piece of art that's why.
Listen, BDSM is a hard thing. It's hard to participate in, its hard to watch, it's hard to understand and its hard to portray. Yet with For Real, it felt effortless. Laurie and Toby pulled me into their world of dominance of submission and trust and care with the ease of a fish gliding through water. Of course there were stumbles but not for one moment were you ever thrown out of the moment. It was, as the title said, For Real. Toby and Laurie were whole realized and complete people. They were strong and sure and beautiful and vulnerable and interesting all on their own and it made their coming together. I would've been fascinated by their relationship even without kink to be honest.

Plus, as someone who spent a bit of time in the London Underground Clubs scene many many moons ago, it was lovely to hear clubs I knew name-checked every now and then. But that was mostly a bonus for me. ;)

What other book might you compare For Real to and why?

Good lord. Not a book but maybe the movie Secretary if Maggie Gyllenhall and James Spader switched kinks but everything else stayed exactly the same.

Which character – as performed by John Hartley and Paul Berton – was your favorite?

Laurie and Toby were both divine but I felt far more comfortable with John Hartley's Laurie than with Paul Berton's Toby because I am closer to Laurie's age than Toby. That's not a sign on his performance, just a sing that I'm getting old *sob*

Old enough to know better. Young enough not to care.

This book was brilliant - both in the sense that instilled joy and pleasure and in the sense that it was in fact intellectually brilliant. Toby was so smart I wanted to reach into my Audible app and shake him with his poetry and literary criticism and creativity and emotional maturity. Everyone in this book was there for a reason. There were no extemporaneous characters. Everyone, even the incidentals, had a purpose. I walked away feeling like I learned something even as I'd been entertained. It's been a long time since I've felt that way about a book. It's lovely to feel that way again.

Now who do I have to bribe to get the rest of Hall's works audiobooked?!

I chose the book because I've read nearly all of the books by Alexis Hall and enjoyed all of them. This one really touched a special place for me dealing with confusion, loss, low self- esteem and just wanting to be loved no matter what your station in life.

One of the best books I've listened to in a long time.

Yet another enjoyable read from Alexis Hall. And it definitely doesn’t hurt that the narrator could read the dictionary and I’d still listen. 😉

The absolute best D/s book I've ever read! Hands-down! Never has an author captured the essence of being a submissive more accurately. So effin' perfect it almost hurts when the last words are uttered and the book has concluded! God, I want MORE of these two and their beautiful relationship. *goes to knees* Please, Sir, more.

As much as I enjoy reading Alexis Hall's excellent prose, this time I enjoyed hearing it even more. These narrators brought the characters to life by dramatizing the story, not merely reading Hall's beautifully literate prose.

I highly recommend this production, and know I will listen to it many times.

Get this right now!

I loooooooooved this book when I first read it. And now I love it even more. John and Paul's voices were absolutely stunning, true to the character I pictured, and had me swooning with love for these characters all over again.
This is one I will listen to over and over again!

OMG THIS BOOK IS AWESOME

Laurie and Toby are so different for each other and at the same time totally perfect together!
I love Toby fierceness while confessing his wants... and it's absolutely beautiful to see Laurie opening up for him... Their sex scenes were perfect and so hot!! loved it 🔥
Since I'm a foreign, I struggled at some parts with the British narration and had to use narration x text sync to follow..

Nothing short of perfection

Such a beautiful, tender lovestory

The narration is beautiful and on point. 7 stars out of five.

I really enjoyed both narrators and their portrayal of the characters. I feel like the voices are spot on.
love the story.

I might have a soft spot for gay love stories, but this book had me laughing, and crying so many times. The story just felt really plausible, and close to home, and the characters were well written and developed. Also the narrators are both perfect for their respective roles. Loved it!

A wonderful performance of a lovely book.

I am sure I will listen to this book again and again. It's is a lovely audio version of a lovely book. The book has changing points of view, and in the same way the audiobook has two narrators. Toby, a young man with a wild combination of certainty and uncertainty, Laurie, older and more jaded, with his emotions locked away but so open, physically. The alternating voices felt very real in print, but even more so here.

This was my first time with these narrators, but I think they did a marvellous job. Laurie's narrator has a lovely RP accent (and also does a passable Aussie accent). He's slightly melodramatic, and manages to convey Laurie's jaded, slightly cynical and "given up hope of more in life" attitude very well. Toby's narrator is clearly younger, and combines wide eyed marvel, late teenage passion and slightly gleeful cruelty very nicely. It's more than just "read," but done with conviction and emotion, and it really works. Which is what I liked most--how the narrators drag me in, emotionally. It does feel real. They bring this wonderful story to life and give it flesh.