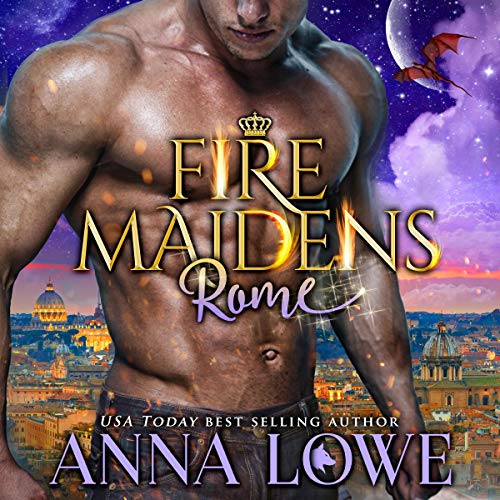 The one woman this lone wolf can't resist...

New Yorker Lena Castamolino has trouble. Big trouble. Every time the full moon shines, her body tries to turn into a wild beast, and she has no idea why. Her skin goes all leathery, and her shoulders begin the agonizing transformation into wings. Wings!

Could it be something about moving to Rome - a magical city that has called to her for years? Or does the answer lie in the deadbeat father who abandoned her at birth? Either way, she needs help because all the grit and determination in the world won’t stop the moon or the evil forces hot on her trail.

Eternal city? Eternal banishment is more like it, at least for a member of the despised Monseratti clan. But wolf shifter Sergio Monseratti has been granted one last chance to return to the city he loves, and he’s not about to blow it.

All he has to do is bring down a ruthless mafia boss, and he can’t afford any distractions along the way. And he absolutely, positively cannot fall in love with the mysterious woman who could be the key to saving the city, no matter how high the passion between them builds.

Dazzling starlets, billionaire playboys, vengeful enemies, power-hungry dragons, secret heirs. It’s impossible to know who to trust, but one thing is for sure - destiny is on the move, and Rome is its stage.

The guardians of old have summoned a new generation of shifter heroes to protect the castles, cathedrals, and cobblestoned streets of their ancestral homes and to seek out the last of the Fire Maidens - women coveted by the dark lords for their royal blood.

Those women are absolutely off-limits to the young warriors tasked with protecting them. But destiny, of course, has other ideas.

Lena was a photographer and Sergio a guardian. He stumbled upon her when she was in mid shift. Sergio was on assignment following Vincente (a bad guy) so he ended up at a photo shoot with Lena and Amber. Amber was a piece of work and so full of herself. Amber wanted Lena to photograph her on Vincente's yacht. The bad guys thought Amber was the Fire Maiden when they saw the stone turn brilliant, but when they later realize it is Lena, Sergio had to get her off the yacht. I love how they escaped by taking one of the jet skis. When they reached land, Sergio took a motorcycle. From there, the action really takes off. There were quite a few “edge of your seat” moments because you know the bad guys would not be far behind them and eventually find them. Loved the fight scene and when the bad guys were trying to capture Lena. All he!! breaks loose when they do. Ms. Lowe always has a good balance of action and romance and she manages to pack a lot into her stories. This book was so enjoyable that I would have loved it to continue longer. As always, Ms. Lowe's bad guys are really bad, each in their own way. The b!tch, Jackleen, makes an appearance in this book. I hope Ms. Lowe plan to write a story about Marco who claims not to want a mate.

Kelsey Osborne narration was spot on, especially the selfish, self-absorbed Amber. I was given this free copy audiobook at my request and I have voluntarily left this review.

The narrator does a solid job. I like the excitement in her voice and she gives a clear performance. I'd recommend listening if you have the chance. A fun listen!

Loving this series so far! This one I believe is my favorite too! Cool beginning with Lena not knowing that she’s a dragon shifter, so she has no idea why her body is trying to shift. Sergio, a wolf shifter, comes across her and offers support. That’s just the beginning of Lena and Sergio’s problems; they have a couple groups of bad guys after them, makes for some great suspense. Love how honest Sergio and Lena are right away; no games is always refreshing, and I love how accepting she is of the whole shifters thing. Lena is a tough cookie that uses her common sense. Sergio is adorable. These two have some majorly hot chemistry! Sweet and sexy connection! Plus, a shifter council that doesn’t completely suck! The story was engaging right from the beginning. Loved the Rome setting, the action, and the magical elements. Excited for the next book in Portugal with Marco!

In this installment of the fire maidens you get another couple that is fierce when their other half is in danger. These two are the perfect pair for each other and neither fights the pull so you get so much more of their love for each other than in the previous books. Love, love, love this couple!

I am really enjoying this series, and this story does not disappoint. There is great action and very intense at several points in the story. The characters are wonderful. I wasn't sure from the previous books whether or not I was going to like Sergio, but I ended up loving him. His acceptance of his fate was immediate and I believe that is because he is a wolf shifter. It follows with what we have learned about the different shifters in this world. The only point I didn't like was her changing into a wolf shifter too, considering she is a dragon shifter. This point is quite confusing and there is no real explanation for it. It doesn't take away from the story, but leaves my mind wandering. The narrator is the same as the first two and she gives the same powerful performance as the last two.


Fire Maidens:Rome is book three in the Billionaires & Bodyguards series and it's a great addition! This is Sergio and Lena's story! We first met Sergio in book two, Fire Maidens:London, where he was a supporting character! I really loved him as the hero in this book!

Lena has just relocated to Rome-somewhere she has always wanted to live. She does photography primarily for tourists and bridal parties to pay the bills. Hoping to one day have her work published, she has lots of spare time to photograph the sites with her unique perspective. Things are going well until her body started doing some pretty spectacular things. None of this was going on prior to her coming to Rome. She is caught mid-shift one night by Sergio. He was there to let his wolf run free for awhile. He shifts back to a human and offers Lena his help. She understands that she is shifting, but she doesn't know why? Something with her Mom or maybe her Dad? He was not around throughout her life, so she has no clues about him. Lena doesn't know what to make of it that's for sure. Sergio is there to help!

I thoroughly enjoyed this book! Lots of romance, suspense, and intrigue that the series is known for! Lena and Sergio have some serious chemistry!! I found the idea of Lena's awakening as a shifter a totally different and interesting angle. Most all shifters know what they are from birth so this was refreshing. The Guardians of Rome sure are an eclectic bunch they are! True to the set up of the series, each council is headed by a woman! I am especially drawn to that!

If you have the chance, grab this audiobook and dive in! It is definitely worth the treat as Kelsey Osbourne takes us on a fantastic journey in Anna's book! She brings a vividness you just don't always achieve while reading yourself!

Anna does a great job by giving us the groundwork for the next book in the series! I look forward to seeing how the hero will handle the Guardians, the enemies, and of course, his Fire Maiden!!

Guardians, fire maidens, and destiny. Fates interwoven, this is the story of Sergio and Lena. Sergio, a lone wolf, gets an opportunity to return to Rome, but at a price... bring the mafia boss down. Lena, photographer, has her own dilemma. She needs to figure out why she grows wings at the full moon. The story follows well after the first two fire maidens, with an easy storyline with action, drama, and romance.

The stories can be listened to individually, but it's nice to get a glimpse into the travels of the next story. I voluntarily reviewed a copy of Fire Maidens: Rome provided by the author.

Another thoroughly enjoy listen! I loved that the action started right away with Lena dealing with her inner beast that definitely wanted out. Of course, our hero, Sergio, is there to lend a hand. I liked their interactions throughout the story as well. As usual, I enjoyed the side characters, especially Ariana and Dante.

BOOK REVIEW......
Good story. Interesting, exciting, fun, with a good pace. The dialog is smart,
well written and flows smoothly. The characters are fascinating, captivating,
quirky, engaging and well developed. I look forward to reading more of this series.

NARRATOR REVIEW.......
Narrator did a good job with the voices

This is my new favourite PNR series, I say that whenever Anna Lowe starts to write a new one and I mean it every time! In the previous book, Liam and Gemma's story we were introduced to Sergio and I have been eagerly awaiting his story.

Sergio has a checkered past, like all his team members in the Legion it's not something he's proud of but he did what was necessary to protect his mother and it made him who he is. Because of his past and what he knows The Guardians of Rome have asked him to come back and help with what could possibly be a mafia problem. When his "mafia boss" visits a photoshoot involving his girlfriend Sergio goes along and is shocked that the photographer is the dragon shifter he met recently. As if her being a shifter isn't enough his wolf insists that she's his mate.

Lena has always dreamed of living in Rome and now she's living there but she doesn't know why on the full moon her body tries to change into a beast but what kind? At a photoshoot, she sees the man/wolf she met in the park recently.

Later Lena is shocked when Sergio comes to the room she is renting and offers to help her with what has been happening to her, can he be trusted?

This is an exciting story with very well-drawn characters who have an amazing connection. I loved how strong Lena was and how she learned and adapted to her changing situations. Once again love won out over what the Guardians would have planned for their Fire Maiden.

The narration of this book was, once again, performed by Kelsey Osborne, she and Anna seem to have a wonderful partnership. Kelsey knows just how to bring Anna Lowe's characters to life.

I was given this audiobook as a gift and am voluntarily writing my review.

I want to visit Rome!

I love the characters! I love that Anna mentions places in Rome, it makes me want to visit. This story makes you envision what it would be like to find your mate...all her books make you feel that way. She also builds up the anticipation of other characters in her stories. So I can’t wait for the next book!