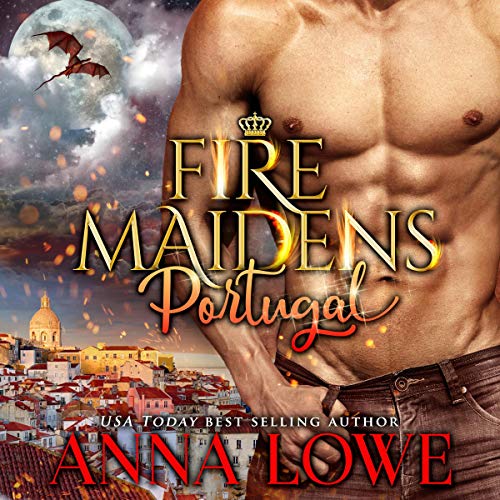 A jaded warrior who doesn't want to get involved and an irresistible she-dragon on the run.

For centuries, the Guardians of Lisbon have kept shifter forces in check — dragons, vampires, and witches. Now, with their powers dwindling, they’re too busy to respond to a lone woman’s cry for help.

Novice dragon, Laura Sampao always knew her family descended from dragon shifters, but that power — or curse — hadn’t manifested itself in generations. But when she inherits a family heirloom, her life changes forever. Now, vampires are after her blood, and her last hope is a mysterious, jaded warrior who saves her from a brutal attack. And that’s just the prelude to a far greater danger, giving her no choice but to trust the infuriatingly gruff, handsome stranger who awakens all kinds of hidden desires.

Marco da Silva, heir to an ancient dragon dynasty, has been burned by damsels in distress before, and he’s determined not to get involved. But somehow, he just can’t resist. Before he knows it, he’s spiriting Laura off to his private island hideaway with his inner dragon vowing to keep her safe. Because his heart isn’t the only reckless force stirring in the shifter world — powerful enemies are on the move too, and they’ll stop at nothing to seize Laura — and take control of an entire continent.

Lots of "Edge of Your Seat" Action & Romance

This is another great addition to the Billionaires and Bodyguards series. Laura has the ruby and is wearing it around her neck. She knows nothing about a Fire Maiden. Marco lived between his two homes – one in Lisbon and the other in Madiera. Marco was in Lisbon when he sensed Laura’s fear and went out to investigate. He rescued her while she is being chased by baddies. She is not used to shifting into her dragon form so she is very clumsy. It is so funny when they arrive at Marco’s home in their escape from the baddies and she has a hard time landing. I could just picture the landing. LOL.

Olivia, a biotch, broke Marco’s heart about 10 years ago when she left him. He doesn’t want to open his heart again even though he feels something for Laura. She stays at Marco’s house. When he had to go out, Laura stupidly left Marco’s house to meet with Tito, who turns out to be a real bad @ss. Laura calls for help and Fin arrives before she meets with him to distracts him and his goons so Laura can hide until Marco arrives. There was a lot of “edge of your seat” action when Marco and Laura tried to escape them. Shortly after they arrive at Marco’s house, the baddies are there wanting Laura. Laura and Marco shift and take a marathon flight hundreds of miles away to the island of Madeira where Marco has another home and staff. A lot happens when they are on Madeira and a lot of action takes place.

This book was thoroughly enjoyable. I love the fact that during all of the action scenes, Marco, is slowly falling in love with Laura. Marco was hurt by Olivia, who was his fiancée, when she left him and she turns out to be a real bad@ss too. I love how Laura gained confidence and took care of Olivia.

I love Fin’s role in this book. He is awesome and I am rooting for him to find his mate.

I am totally in love with the whole Billionaires and Bodyguards series by Anna Lowe! Book 4 Fire Maidens: Portugal is a solid winner in the series! This centers around Laura, a fire maiden and Marco a dragon shifter.

Laura is a dragon shifter(and unbeknownst fire maiden) but a novice about to handle everything dragon. She is the only one of her family that is able to shift in decades. She was astounded when she shifted and has been seeking help, guidance, and information ever since. Not really getting any help, it is recommended she seek out the Guardians of Portugal for help and insight. Only once there, the Guardians seem too busy to grant her an audience. There are some people that are interested in Laura though, some rather unscrupulous people. They would love to bring Laura to their side and they go after her.

Marco comes upon Laura being attacked by vampires and dragons. He helps her by getting away. When he sees she is vulnerable by not knowing what to do, he offers his help and home to keep her safe. He keeps telling himself he doesn't want to get involved, but its not right to leave her alone either. For some reason, he knows he must keep her safe!

I really enjoyed Fire Maidens:Portugal. Marco is one closed off, grump guy! He doesn't understand how Laura is getting under his skin, and it's pissing him off! Laura on the other hand, was taken with Marco from the start. She was reluctant to take his help, but she truly needed it-grumpiness or not! This story had everything you can hope for! Interesting storyline, great characters, awesome local, and fun and flirty romance! All the books in the series can be read as a standalone, but you will want to read the rest because you will be hooked!

Packed with adventure and action and brought to life in audio. You will enjoy this sexy couple and the backdrop of Portugal. Marco is gruff with Laura who is trying to sprout her dragon wings which puts her in a bad position. He takes her to his island to teach her to fly and keep her safe. She not only is his ally but also his mate.

Oh, my goodness! I loved this book. Laura was a rockstar! I loved everything about her. Her spirit! Her tenaciousness! Her wit! Marco was a gem as well. The narration was great as well. Looking forward to the next book!

Who wants to visit Portugal?

Oh my...Laura and Marco. This story was worth listening to. I like stories that isn't a love at first sight story. I love that they learned to like each other and eventually found love. If you want to read a book with a good plot and and love, read this one. :)

Loved this story. Marco and Laura’s story will keep you engaged and invested in the outcome.

I was not disappointed. Marcus and Laura are wonderful together. When Marcus realizes that his behavior is causing more harm than good, he actually begins to think like the soldier he truly is. Even with his brusque behavior in the beginning, it is understandable as we go through Marcus's thinking process. I liked that this story focused more on Marcus than the other stories focused more on the females. This one was more equally based, and helped to make the story more relatable and enjoyable. Once Marcus accepts that Laura is his mate, his personality suddenly takes a major shift. It's like the wary soldier turns a switch off and becomes someone else or maybe the man he was meant to be.

I just love the combination of Anna Low and Kelsey Osborne. Anna Lowe writes a wonderful story and Kelsey brings it to life. The aerial dog fights are superbly done. There are some pretty steamy scenes but they are tastefully done. You can't go wrong with this book.

We're now into the fourth book of the Billionaires and Bodyguards series involving Fire Maidens. We are focused on Marcos, who is slightly jaded from his past. And Laura who just wants answers. It seems as though Marcos and Laura's destinies are meant to intertwine. Especially when Marcos saves Laura from the vampires and gives her refuge. Marcos decides to teach Laura about her newfound abilities, which develops into something more.

As always, I enjoy seeing glimpse of past and future mates in each story. Looking forward to what Ireland brings! I voluntarily reviewed a copy of Fire Maidens Portugal provided by the author.

another excellent listen and/or read by Anna. This one focuses on Marco finding his true mate Laura.