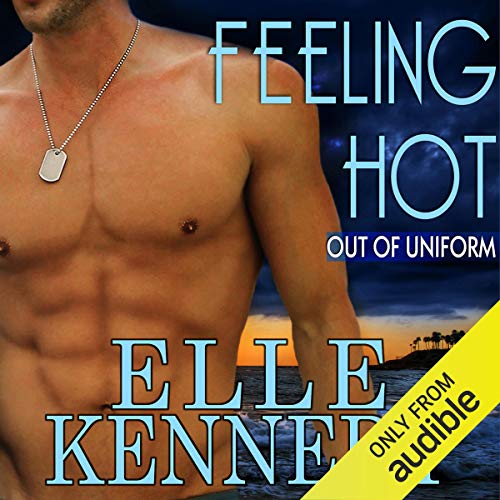 In tight quarters anything can happen.

It's been a rough month for Navy SEAL Cash McCoy. Fresh off six months of celibacy during his deployment, he almost got into a hot blonde's panties before they were interrupted. Since then he still hasn't gotten laid. The reason? He lost her number. And no other woman has replaced her face in his fantasies. Then his CO asks him to keep an eye on his sister for a few weeks. Just until her psycho-stalker ex is transferred. Cash's new houseguest is none other than the same gorgeous, quirky blonde. And just his luck - his orders include an emphatic hands off. Jen Scott is having none of it. Now that she has a second chance, she's not letting Cash slip away.

Orders be damned, he's the one man capable of helping her explore her sexuality. She's even willing to break her own rule - never date military men - to get the gorgeous SEAL into her bed. Except Cash makes it clear he wants more than she bargained for. Much more. Not just her body but the one thing she promised herself she'd never give to a man in uniform. Her heart. Warning: Sexy SEAL? Check. Sassy heroine determined to seduce him? Check. Scorching hot sex bound to make you blush? Double check. A threesome and some man-on-man action? Triple check. You've been warned.

This was a pretty predictable story and it definitely involved instalust and instalove but, I enjoyed it anyway. I liked both the Hero and the Heroine from the beginning of the book. There are so many books in which either the Hero or the Heroine have to learn the error of their ways, before they become likable. These two were both a bit quarkey but they suited each other. Of course, the Heroine was the little sister of fellow Navy Seal, so they did have that obstacle to overcome but, they found their way. This story had a lot of Bro humor but it was entertaining to experience the interaction between these Seals and their Seal ladies.
If you want a light hearted romantic comedy, to listen to, this one will fit the bill.
This didn’t leave any kind of an emotional hangover and that’s exactly what I was looking for.
*Warning, there are a couple of M/M/F ménage scenes, so if that offends you, choose another book*
-V from Kansas

The story is ok; the plot line is thin at best, but it is a pretty decent story to listen to and makes for good chick lit/beach "read."

I just loved the narration, though! David Benjamin Bliss is just the best! I like how he does voices for all the characters. And his voice is so sexy that his performance creates gasp-worthy anticipation during all the naughty parts! ;) Even his name sounds like a romance book character! He has such a nice voice; I can't wait to listen to the other books he reads!

What does David Benjamin Bliss bring to the story that you wouldn’t experience if you just read the book?

He does accents for all characters so u know who is talking.
Hes just great!

Besides the erotica the actual story is great. Kind of saw the end coming, but was still great. Something near the end I didn't. This book was hot too!!!

This book was funny, sassy, scorching and romantic with a little angst thrown in as drool-worthy Cash has to watch over Jen for three weeks but their sizzling chemistry soon boils over and, by day two, it has them taking things to the next level.... and beyond. Unfortunately, neither of them wanted anything more than a fling but spending so much time together, getting to know each other, learning each other's flaws, growing in confidence because of each other, and even trying a ménage, made them soon realise that their relationship was just too perfect to throw away.

Told from dual POV's by a great narrator, this book made you really feel the camaraderie between the Team as you share in their witty banter and join in a family party, it had great secondary characters, there was a bit of drama from a jilted boyfriend/stalker and a bitter-sweet sub plot. However, the main lighthearted love story between Cash and Jen was just so sweet, tender, sexy, funny and romantic that it'll leave you with a grin on your face and that feel good feeling.

Worth a credit? An easy-going book full of sexy six pack wielding Navy SEALs, plenty of hot n heavy (including M/F/M & a bit of M/M action) and a captivating romantic plot certainly ticked all my boxes and has me hoping Audible will get the other missing books in the Out Of Uniform series because this is book 7 and I SO need to hear the rest of them!! Very creditworthy..... and if you're in the mood for a very hot light listen with loveable characters that you really connect to then I'm sure you'll think so too.

Narrator gives an added hotness to an already blazing story!!

DBB's skill as a storyteller provides another dimension to Elle's words. He brings the words to life like so few narrators can. I'm still sizzling even after I've finished the book!!

Elle Kennedy has delivered another winner with Feeling Hot! This is the seventh installment in the Out of Uniform. I hope Audible makes all the books available. However, this can be a stand-alone book.
Elle Kennedy writes novellas or novels, the ending result is the same: a great story. I was excited for Feeling Hot & I was not disappointed! I loved everything about the book. I loved Elle's development of her characters, Cash & Jen; they were well-developed & in-depth. They were also likeable characters with great chemistry. I happily cheered for them throughout the story. I liked that they didn't put up BS with one another when they both knew what they wanted.

As always, I enjoyed the author's storytelling and writing style. I was drawn into the story right from the very beginning which made this a very hard to put down book. Other factors that also made this read enjoyable were the well-crafted plot & storyline. The pacing of the story was what also kept me invested in the story. Without the story dragging, I never once got bored or found myself scanning pages.

Overall, Feeling Hot was a highly entertaining & satisfying listen with lots of hot sex, fun, sweet, and emotional moments. This is another great addition to the series & I cannot wait for the next one. So yes, Feeling Hot is a highly recommend from me!

David Benjamin Bliss was really good with the delivery of the story.

This book was interesting.  I look forward to reading more books from this author soon.

Good story that hi lights a tough job. Jen’s concerns are real. I will say much of this story was predictable but it was also an enjoyable way to pass time.

A seductively sensual and sweet journey to go on with Cash and Jen. I enjoyed every entertaining moment of this story.
David Benjamin Bliss made this book even better, his voice is so soothing, and heart palpitating. Loved it!