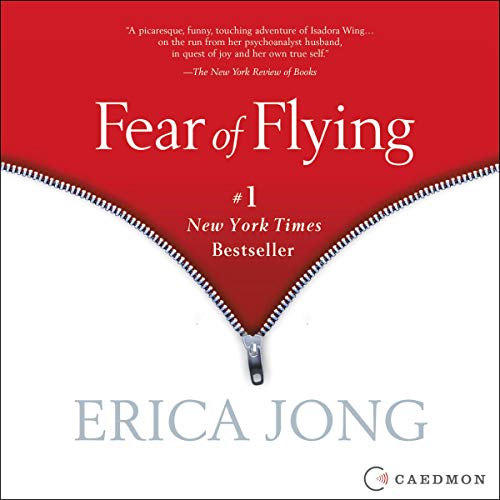 Originally published in 1973, the groundbreaking, uninhibited story of Isadora Wing and her desire to fly free caused a national sensation. In The New York Times, Henry Miller compared it to his own classic, Tropic of Cancer and predicted that "this book will make literary history..." It has sold more than 12-million copies. Now, after 30 years, the revolutionary novel known as Fear of Flying still stands as a timeless tale of self-discovery, liberation, and womanhood.
©1973, 2001 Erica Mann Jong (P)2006 HarperCollins Publishers
Roman féminin Fiction Romance Roman et littérature Satire
Afficher plus Afficher moins

I very nearly gave up on this one. I'm a woman in my 30's. I have always considered myself a modern, liberated woman. I had a memory of this book on my (feminist) mother's bookshelf, and of being titillated by the racey cover. I had heard that it was a seminal feminist book. So, I finally decided I should fill in this gap in my literary repertoir and "read" it for myself.

However, as I listened I found I really despised the main character. I was completely unable to relate to her. My generation is very different from hers. I am happy in my marriage, my interpersonal relationships, and my self-image. I've never felt oppressed or smothered by anyone. This woman just seemed disgustingly whiney, neurotic, and childish.

I am stubborn, though. At first I kept myself going by telling myself how good it was to see how far we'd really come since then. I thought it was heading for all kinds of extreme endorsements-- live in communes, forsake all commitments, want nothing more from life than perpetual free sex and empty "freedom". I kept thinking, thank goodness the pendulum has swung back from that extreme into some sanity!

In the end though it didn't go where I feared it would. It more than redeemed itself, and I'm glad I stuck with it. It's about a woman finding her own identity, and while the details of path she took to get there ARE rather dated, the journey itself is as pertinent today as it ever was. It IS a wonderful insight into the dilemmas of being a woman, of the differences and conflicts between the sexes, and of what it means to really grow up and be a whole person.

I purchased this book more out of curiosity than a desire to partake of good literature. In that vein I suppose I deserve what I got. I listened all the way to the end just to be sure I didn’t sell this loudly ballyhooed best seller short.

Just because a book is popular, doesn’t make it praise-worthy (except maybe to the agent and accountant of the author). Maybe I am missing something, because I really didn’t find much to cheer about in this book.

Could its popularity be explained because of the gratuitous use of the “f” and “c” words? Maybe in 1973 these words spewed from the lips of a woman was considered liberating? I am no prude and am not offended by this language insomuch as I was bored by it. Frankly, I found the main character, Isadora Wing, to be a shallow, self-centered, disillusioned and dissolute individual. I have a strong suspicion she was the fictional embodiment of the author, as is so often the case.

If you crave a story of a whiny young woman looking to “find herself” by sexing her way across Europe, you will enjoy this book. If you are looking for a great story, well written, you will be sorely disappointed.

I read this book about 20 years ago and wanted to re-read it now to see how it holds up with the passage of time. I really enjoyed it a lot. Hope Davis is great as the narrator. Really believable. I can still see why this book was considered "ground-breaking". Isadora's unembarrassed search for who she is still speaks to me and her open acceptance of her sexuality still seems pretty radical and brave. And not just because she talks openly about sex and uses a lot of "swear words". But because it really isn't about finding the right man, which she eventually figures out.

Just couldn't get through it

Has Fear of Flying turned you off from other books in this genre?

I notice the split between male and female readers in the list of reviews. I read a lot and am always curious about the female perspective. I read this book as a young man in the 70's, vaguely remembered enjoying it, and thought I would take another look at it from the distance of decades.

Now I think its appeal to me as a young man was the titillation of hearing a woman describe sex partners in frank, colorful ways. Isadore's conflict of adventure versus security is timeless, but the context of the narrative is so dated, and today we have so much more nuance in the discussion, that I was bored. The narrator's self-absorption, the step-by-step description of her passage through a crooked corridor of mirrors, seemed adolescent. The long side-passages that were unconcerned with pleasure, like describing how the narrator rediscovered her Jewish heritage while living in Germany, were glib and shallow to a mature reader.

Evem after "skimming" the audio, I just couldn't get through it.

Whew! I can't believe I hung in there until the end. The main character is too darn neurotic - I wanted to throttle her.
Not my kind of book.
The interview with the author at the end of the story was interesting.

The book was very well written. The narrator did an excellent job. At no point did her portrayals feel robotic or inauthentic. But the story itself is lackluster. It's nothing but the author complaining and whining for hundreds of pages. Nothing really happens. There are no interesting characters and there's nothing controversial about the sex. The narrator is an obvious feminist but her actions are in complete contrast. There's direction here. I could only make it to the halfway mark and I struggled to get that far.

a feminist powerhouse of a novel

Erica Jong basted into the stratosphere in the mid 1970s. I was in Junior High School when this book was released, and I remember well hearing her name everywhere. I vaguely knew that the book was about sex and that she was a "bra-burner feminist." I never read it. I was too young, and when I grew up it never entered my mind. But this month it is the BOTM in my Reading 1001 group and so it was finally time.

Fear of Flying is simple in its theme and story. Isadora White Wing is a writer, like Jong. She is in an unfulfilling marriage. Her husband is a bit cold and unsupportive of her career. She finds their sex life dull and eventually begins a vivid fantasy life in which she imagines sex with other men. The book is essentially about those fantasies and what they mean to Isadora. And it is also about what sexual fantasies mean to all women. I didn't particularly love the book. I will be honest here: the directness and bluntness of the sexual content isn't something I liked. It made me uncomfortable. However, I recognize that this is a personal inhibition and in no way detracts from the importance of this work. And although I didn't love it because it made me uncomfortable, I still loved it for the way it made me think.

Nobody before Jong (and very few since) have ever written about sexuality from the female perspective with so much forthrightness and depth. I remember that when I read John Updikes' Rabbit series a year or so ago that I felt like I was punched in the gut and I liked it. The testosterone was on overload. And yet I loved it. This book is like that one. There is nowhere to hide. Jong uses language that is affronting and a bit outrageous. She discusses subjects that are self-indulgent, personal, and even narcissistic.

The reader may not always agree with Jong, but if a woman reads this book and finds nothing to which she can relate... well, I would be shocked and surprised, because this book discusses the value of work to women. It discusses the need for respect and support. It discusses personal fulfillment, passion, comfort, stability, marriage, hope, anger... And, of course, sex.

Jong uses the two men to show the two competing desires. Her husband Bennett represents home, comfort, ease, peace and security. He is steadfast. Her fantasy man, Adrian Goodlove, represents desire, zeal, intensity, energy and excitement. And, honestly, she wants both. So do I. I think most people want both, but it is never written about and acknowledged that women have the desires for what Adrian represent. Thousands of books for women discuss our need for the Bennetts of the world. But it is the rare few that show our need for the Adrians of the world.

So, back to the 1970s. It is important to remember that ERA was never ratified. And I remember that the women in my life didn't support it. The women who wanted the ERA were viewed as strident rather than progressive. They were seen as "easy" rather than free -- because a woman who wanted sex was a bad thing. The ERA means that the law cannot disadvantage women... that is all. If you lived through the era of the fight for the ERA you will remember the craziness of some of the arguments. If you are too young to remember, please go to youtube and watch the video of John Oliver discussing the ERA. It is funny, smart and full of great history.

What did you love best about Fear of Flying?

Jong's unflinching narrator finds her voice and her core through the course of this book. Many contemporary culture makers such as Lena Dunham owe a debt to this book.

What other book might you compare Fear of Flying to and why?

Books? Movies. I would compare all of Woody Allen's movies and later Lena Dunham's Tiny Furniture and Girls to Fear of Flying.

Have you listened to any of Hope Davis’s other performances before? How does this one compare?

She carries the right outrage and coolness the book's narrator contains.

If you could rename Fear of Flying, what would you call it?

Handbook for Young Women: How to Avoid Distraction Through a Series of Questions

I can't wait for my daughter to be old enough to read this. I hope it will provide her with iconography that she can identify necessary and sometimes painful transitions by. It is not theory, this conversational book, it is literature.

If you make it to the end, listen to the interview with Erica Jong. It reveals her lifelong support of women's voices.

If you could sum up Fear of Flying in three words, what would they be?

Narrarator was good but a tad too bubbly for me. I like hope Davis but she had a desperation in her voice which frustrated me. But I can't imagine another reader now

I couldn't stop listening to it - the authors insight
And experience were so real yet outrageous at times.

Wish I had read this one - think I'll have to re-read it now!

John, I wish I'd read your review before I wasted a credit on this book. You're a better (or stronger willed) person than I am if you listened to the end.

There may be people out that that can relate to Isadora Wing, but I am definitely not one of them.