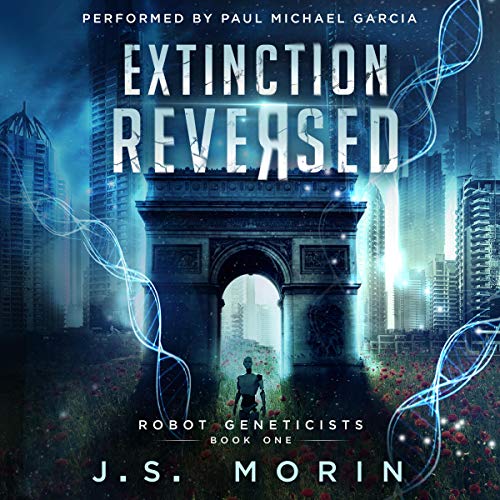 These days, even the humans are built by robots.

Charlie7 is the progenitor of a mechanical race he built from the ashes of a dead world - Earth. He is a robot of leisure and idle political meddling - a retirement well-earned. Or he was, until a human girl named Eve was dropped in his lap.

Geneticists have restored Earth’s biome and begun repopulation. But primate cloning is in its infancy; human cloning is banned.

Far from a failed genetics experiment, Eve is brilliant, curious, and heart-breakingly naive about her species’ history. But Eve’s creator wants her back and has a gruesome fate planned for her. There is only one robot qualified to protect her. For the first time in a thousand years, Charlie7 has a human race to protect.

It didn’t save us, either.

The robots we built in our final days preserved human minds. They survived the end of life on Earth and embarked on the greatest single project in all recorded history.

The result of 1,000 years of genetic engineering, terraforming, and painstaking toxic cleanup has resulted in the ultimate achievement of the Post-Invasion Age: a healthy human.

Don’t ask about the 13 Eves before her.

Or do, because that’s the reason why she’s in danger, and why one brave robot puts his millennium-long life on the line to save her.

Welcome back to the golden age of science fiction, when scientists had planet-sized dreams and robots were robots.

Grab your copy while there’s still an Earth left to listen to it on.

Fans of the book “Prototype D” will enjoy this book, I think. Where as in PD, the main characters are human adult scientists, wacko military leaders, and a gang of rebels trying to build a robot army, in Extinction Reversed, it’s robot scientists, wacko renegade geneticists, and the very loose robot leadership attempting to bring back humans 1000 years after an alien race destroyed all of Earth’s humans.

For a century a small number of robots have been attempting to get the world back into working order for the eventual return of the human race. Thanks to the 27 human scientists who made copies of themselves into robots, the robot leadership has approved many robots built and made with mixes of the 27 different personalities. A 30% Charles/34% Toby/36% Evelyn will give a completely different set of traits, personality, and ambitions as a 35% James/12% Victoria/53% Charles. Completely different. The oversight committee only allows certain mixtures of the human brains that were saved before the fall of humans, so while they have many of the same attributes, they are not the same.

Charlie7 is possibly the oldest robot alive. Because of all his heroics during the downfall of humans and then the major part he had during the initial rebuilding period, has given him a sort of “retirement” status that he issues to meddle in gov/counsels affairs. Everyone knows him, and many owe him favors. When A Toby requests some private time with Charlie7, he sprints a HUMAN child on him. Not knowing what to do, Charlie7 accepts responsibility to keep her safe, call in some favors. He can’t remember the last time he saw a human that wasn’t “broken” - poorly engendered in secret labs by criminal scientist robots. The broken humans that are found, get sent to the “scrap yard” which is actually a living compound community on Easter Island.

16 year old Eve14, human, doesn’t know what to think about being outside of her room. When she was taken from her rooms at the laboratory where “Creator” made her, she never dreamed that she’s been lied to about her end purposes. With a giant of a man-child, an old knowledgeable and guilt drive robot, the 3 find themselves in a race of time, games of cat and mouse, and also risk being exposed - taking the fall for something they are only trying to get away from, not participate in. They sure as hell don’t want the Creator to transfer her “data” into Eve14’s brain, taking over her newly found life!

I loved this book. Going to get the next one as well. The narration was great, and the audio is crisp & clean. I cannot wait to hear more. I actually bought & downloaded the complete series immediately after finishing. So, while I’ll have 2 copies of book 1 (technically), now I’ve got them all!

This AudioBook was given to me by the author, narrator, or publisher in exchange for an honest, unbiased review.

A great story about humanity being destroyed by aliens. Then, robots rebuilding the earth in anticipation of humanity being reborn. And after a thousand years robots recreate human life. Then the fun really begins.