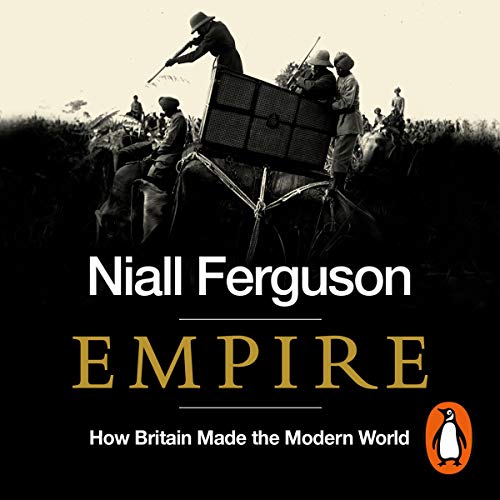 Once vast swathes of the globe were coloured imperial red and Britannia ruled not just the waves, but the prairies of America, the plains of Asia, the jungles of Africa and the deserts of Arabia. Just how did a small, rainy island in the North Atlantic achieve all this? And why did the empire on which the sun literally never set finally decline and fall? Niall Ferguson's acclaimed Empire brilliantly unfolds the imperial story in all its splendours and its miseries, showing how a gang of buccaneers and gold-diggers planted the seed of the biggest empire in all history - and set the world on the road to modernity.

"The most brilliant British historian of his generation. Ferguson examines the roles of "pirates, planters, missionaries, mandarins, bankers and bankrupts" in the creation of history's largest empire...he writes with splendid panache...and a seemingly effortless, debonair wit." (Andrew Roberts)

Fantastic introduction to the British empire

This is an ideal book for anybody interested in understanding the rise and fall of the British empire. Although it covers centuries of history, it transitions from eras and countries very well and leaves us wanting to know more (but in a good way).

The author gives a great performance with gives it a sincere angle as we detect passion and even sarcasm in some sections.

I'm looking forward to reading other books from Niall Ferguson.

The author sounds disturbingly pro Empire: reminiscing its greatness, explaining away its atrocities with on-the-other-hand...

Ferguson should narrate all his books.

What made the experience of listening to Empire: The Rise and Demise of the British World Order the most enjoyable?

I have seen the TV series and this is a nice recap. Although abridged from the book (was based on the series), it does provide some perspective for comparison of e British Empire with the alternatives, pointing out that

His confidence in his work.

If you could give Empire: The Rise and Demise of the British World Order a new subtitle, what would it be?

The original from the book: How Britain made the Modern World.