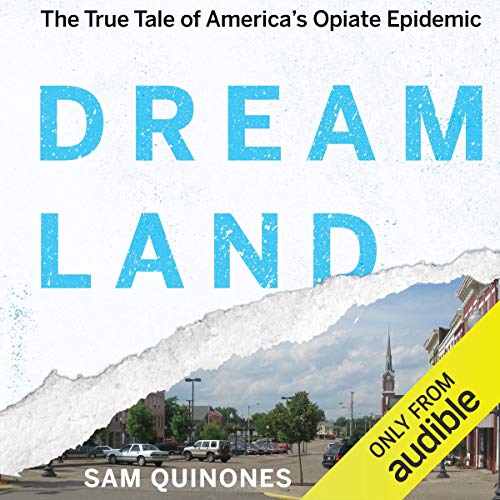 In 1929, in the blue-collar city of Portsmouth, Ohio, a company built a swimming pool the size of a football field; named Dreamland, it became the vital center of the community. Now, addiction has devastated Portsmouth, as it has hundreds of small rural towns and suburbs across America - addiction like no other the country has ever faced. How that happened is the riveting story of Dreamland.

With a great reporter's narrative skill and the storytelling ability of a novelist, acclaimed journalist Sam Quinones weaves together two classic tales of capitalism run amok whose unintentional collision has been catastrophic. The unfettered prescribing of pain medications during the 1990s reached its peak in Purdue Pharma's campaign to market OxyContin, its new, expensive - and extremely addictive - miracle painkiller. Meanwhile a massive influx of black tar heroin - cheap, potent, and originating from one small county on Mexico's west coast, independent of any drug cartel - assaulted small towns and midsized cities across the country, driven by a brilliant, almost unbeatable marketing and distribution system. Together these phenomena continue to lay waste to communities from Tennessee to Oregon, Indiana to New Mexico.

Introducing a memorable cast of characters - pharma pioneers, young Mexican entrepreneurs, narcotics investigators, survivors, and parents - Quinones shows how these tales fit together. Dreamland is a revelatory account of the corrosive threat facing America and its heartland.

What an eye opening book on the opioid epidemic in the United States.
Prescription pills and black tar heroin have taken too many ppl. Like tobacco and alcohol addiction, drugs are the same. Drugs must be decriminalized so we can save our youth. Too many are gone already. Drug addicts need up to 2yrs of rehabilitation.
Dreamland was a brilliant audible book.
Highly recommend.

American Nightmare that is Necessary Reading


In 1980, Portsmouth Ohio was selected as an All-American city, boasting a community center of parks and recreation facilities that radiated out from a football field-sized swimming pool called Dreamland. Quinones describes the town complex like a Rockwell mural, teenagers would ride the bus to town for a cherry Coke and fries, and spend the day around the pool choked with families. A timeline he includes with the book notes that that same year, across the map in California, the first Mexican immigrants crossed the border and set up heroin trafficking in the San Fernando Valley. Four years later, Purdue-Pharma released MS Contin.

In one of the most comprehensive, and important journalistic pieces on drugs that I've ever read, Quinones gives extensive details of how our country came under siege of a true epidemic, and exactly who made the devastation possible, how and why. Dreamland is unlike what you might expect from a book that chronicles the etiology of a drug epidemic; it is weirdly entertaining on an alarming level, a better word might be fascinating. Quinones writes like a novelist, telling a real-life Grimm's fairy tale, tracing the path of the black tar heroin invasion from the small Mexican farming town of Xalisco, and following the trail as it spread through the veins and arteries across America. The revelations of Big Pharma and the Reps that Quinones follows are beyond repulsive; the greed, duplicity, and disregard for lives is nothing less than murder and treason.

We all have some degree of involvement since addiction has jumped from the lower classes and come home to roost at all levels of the economic stratification -- a fact that makes this book all the more timely and important. "The new addicts are cheerleaders, football players, daughters of preachers, sons of cops and doctors...housewives, bankers, teachers." "Wounded soldiers return from Afghanistan hooked on pain pills and [die] in America." Quinones declares, "It''s a great day to be a heroin dealer in America." We are losing the war on drugs with an addiction rate that has skyrocketed over 1000% percent in less than 10 yrs.

Today, Dreamland no longer exists. By the early 90's, OxyContin (time released Oxycodone) was prescribed routinely for pain; the Xalisco "pizza-delivery-style" heroin market spread east, across the Mississippi. As of 2008, drug-overdose primarily from opiates, surpassed auto accidents as the leading cause of accidental death. With a phone call, a dose of black tar heroin from one of the Mexican Xalisco drug families can be delivered to your front door. Young Mexicans are eager to come to America and earn money with the dream of escaping poverty. Quinones talked with a few, and even followed some. They hope to return back across the border, impress a wife, buy a farm, a new jacked-up truck, some American style jeans... Customers die, but there is always a fresh new supply. A few quit the heroin, but none ever really make it out. Heroin becomes a part of the user, it's with them forever like they say, a sleeping monster -- as any parent, or loved one of an addict knows. You live with the addict, then you live with the fear of the return. Philip Seymour Hoffman had used heroin in his younger life. At the age of 46, he'd been sober 23 years -- before the day he was found dead from an apparent heroin overdose.

Structurally, there are some spots where information is repeated, almost like cut and paste sections, and that could be a spot for nit-picking for some. But, Quinones does a job that is praiseworthy. The format goes back and forth between a few of the Xalisco big dealers, the pharmaceutical companies and doctors wrongly prescribing opiates, addicts, and the efforts of the DEA and the FBI. I highly recommend the book. It's an alarm that will enrage you, scare you, and possible break your heart. ALSO: For a great quick look that will have you hooked (npi), go to a site (Goodreads) where you can click on a preview of the book. The preview contains: Maps of Mexico and the Xalisco farms; Maps of the Xalisco drug cells in the US; a Timeline of the development of heroin in America; a Preface about Portsmouth, Ohio and Dreamland; and a fascinating Introduction.

Having known many addicts who have committed suicide or OD'd. I admire the author's research and learned so much about why the abuse is growing at an alarming rate.

I am so happy I read this book. it's a shame that so many people turn a blind eye to this epidemic.

It would be hard to say that I enjoyed this book, though I am glad that I read it. It offers a sobering account of the parallel rise of prescription pain medication and black tar heroine. I've known people who overdosed on pain pills and died. I know people who still struggle with their addictions. Dreamland gave me a framework for understanding how they became addicted, and the long and complex process they'll face trying to get clean. I recommend it to anyone who knows an addict, or to anyone who is an addict.

In terms of the quality of the audiobook, I thought the performance was very good. the narrator spoke clearly and it flowed well. It's high quality, both in terms of content and audio.

A sad and tragic tale.

Hearing all the "players" in our country's opiate epidemic being woven together into a "Perfect Storm" was particularly interesting from the standpoint of being a Pharmacist, and someone who has seen how Heroin destroys a family by having an addicted brother who lost his son and drove our parents to their graves.  I can see how, when used appropriately, opiate analgesics have tremendous benefit, and I also abhor the effects of inappropriate use, and the beleaguering lies people will tell to get their hands on prescription pain killers illegitimately.  I've also had to witness the downfall of other health care professionals around me in a hospital setting... losing their livelihoods, their family, and even their lives, and been witness to the creative ways in which they would procure their chemical(s) of choice.

A certain amount of respect has to be paid to the Jalisco Boy's business model, and the ingenuity of these (I am assuming) uneducated laborers carving out an ingenious plan to make better lives for them and their families albeit at the expense of the glutinous, Verruca Salt mentality of the American society.  The author does a fabulous job of tying it all together, ending in the same place he began, and with new hope that we can learn from our mistakes and keep such chemical dependency from destroying the fabric of our societies, our citizens, in a long, but interesting listen.  Glad I stuck it out.

Worthwhile read for anyone

I loved this book. It can be a bit scattered and repetitive, but overall it is phenomenal. I have already recommended it multiple times.

Another vote for a Pulitzer

Because I have worked for years in the primary health care-behavioral health field, I am very aware of the devastation caused by opioids, in fact so aware that I put off reading this book because I expected it to just add to my emotional overload. Well, to some extent it did - mainly because it exposed how long the problem had been growing more or less unobserved and definitely un-dealt-with - but it was well worth any pain.

Although a bit repetitious in part, it is what I consider to be "perfect" journalism, perfect history, going down story tracks to a certain point, following another track, then another, then bringing them all together. What do Mexican farm kids, drug companies, Walmarts, well-meanng and not so well-meaning doctors have to do with the crisis - read and find out.

I live in the area where this book is mentioned and it is very interesting to see that someone has finally seen what has gone on here for so many years.

Only bad thing about the reading is words are not pronounced the way we say them.

My review title says a lot about who I am. I've been a street cop and supervisor for nearly thirty years (28) and have dealt with the effects of the opioid epidemic. Unfortunately I never really knew the truth of it all. Flat out the multiple mid sized, middle west communities I grew up in and have worked in have never revealed the depth and breadth of what I learned from this book. WOW, WOW, WOW! I'm now highly informed, encouraged as to how we may come out of it and enlightened to share it with my fellow cops and community. This book and audioreading are a great enlightenment and addition to my Audible library. My only complaint is the way the reader pronounced some of the Hispanic names and legal terms. A bit off but very minor. I highly recommend the book and this Audible reading. Thank you!

There is an epidemic of narcotic abuse in this country. Dreamland tells the story of how this epidemic emerged. It follows an arc that begins with an enterprising region in Mexico that can produce heroin to the small towns across America that discovered a cheaper alternative to the prescribed narcotics like OxyContin. Narcotic abuse is rampant and prescribing habits may be contributing. Apart from the facts, this is a gripping the story.