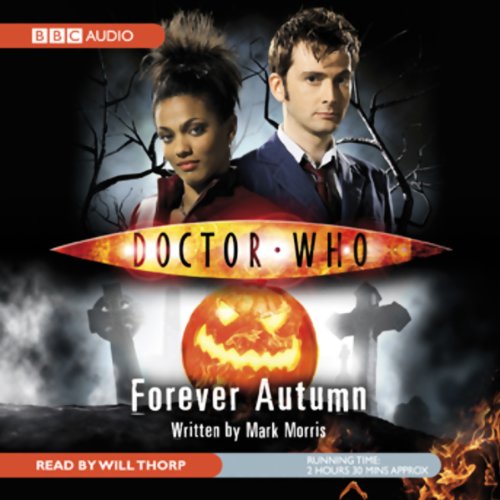 It is almost Halloween in the sleepy New England town of Blackwood Falls. Paper skeletons hang in windows and carved pumpkins leer from porches.

The Doctor and Martha soon discover that this will be no ordinary Halloween. What is the secret of the ancient tree and the book discovered tangled in its roots? What rises from the local churchyard at night, sealing up the lips of the only witness? Why are the harmless trappings of Halloween taking on a creepy new life of their own?

As nightmarish creatures prowl the streets, the Doctor and Martha must battle to prevent both the townspeople and themselves from suffering a grisly fate.

Featuring the Doctor and Martha as played by David Tennant and Freema Agyeman in the hit series from BBC Television, the story is read by Will Thorp, who played Toby Zed in the TV episodes The Impossible Planet and The Satan Pit.

A Doctor Who Halloween - Good for Pre and Tweens

I love the Doctor and Martha together, even though I hate that she's the Rebound-Companion during their time together during the series. I'm glad that most of the books don't feature much of the stupid romance forced into the show.

This is definitely a Halloween story. Pumpkin-esqe creatures, a small town celebrating a Halloween-like holiday, and enough black cats to make you start looking around for witches. It's fun, it has some good action scenes, but the villains don't really seem all that threatening. Also, the townspeople are pretty much stereotypes, right down to the one sensible old woman living in the woods.

Martha doesn't have enough to do in my opinion and the Doctor being captured doesn't add any tension. It just makes you wonder how long until he clevers his way out and saves the day. It was predictable and lacked the real tension I crave in Doctor Who stories. But I did like the climax and it is a very good story for younger children during Halloween.

The narrator did a job performing the story. It was always clear which characters were speaking and his villainous Pumpkin sounded great!

Would love to see this made into an episode!

I absolutely loved this story! I love Doctor Who and Halloween and this is a perfect story. I would love to see it made into an episode of the show!