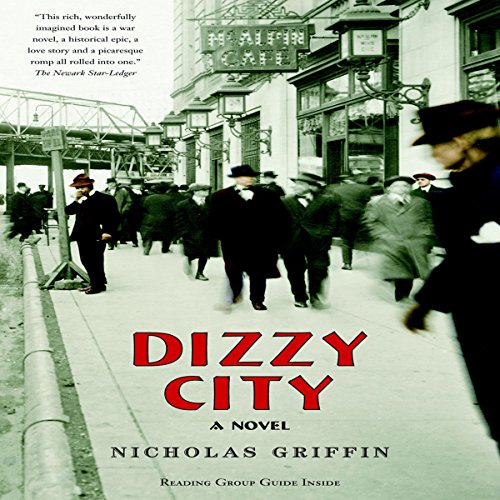 The year is 1916, Europe is at war, and American industrialists are getting rich. Englishman Benedict Cramb deserts the trench warfare of northern France and stows away on an outbound transatlantic ship. When the ship docks in New York City, a place untouched and largely unaware of the horrors of war, he realizes that this is the place to reinvent himself.

Ben soon falls under the sway of the urbane and mysterious Julius McAteer, who sees in Ben his chance to finely hone the tools of someone who can master the art of the con. They concoct a ruse, pick their mark - a blustering Midwestern cattleman named Henry Jergens - and the game is afoot.

In the process, Ben falls in love with the beguiling actress Katherine Howells, who in turn is connected to even more men of vast means. But the further Ben follows the money in New York, the closer he moves back to the war in Europe and his shattering experiences there.

This compellng novel is rich in historical detail and filled with suspense, romance and adventure.

"Nicholas Griffin has made historical fiction his literary playground... [and] 1916 Manhattan proves especially fertile ground.... Griffin writes with authority on his chosen subjects, and even though he employs enough point-of-view shifts to give an unintended meaning to his book’s title, the effect works, raising the question: Who is conning, and who is being conned?" ( Time Out New York)
"Told through the various perspectives of Ben, Henry, and Katherine, the story takes on layers of complexity, as do the characters. Griffin also mixes historical events into the plot to keep the reader riveted and guessing until the very end." ( Booklist)

There were some very good things about this book. It started really strongly and evoked the horrors of life in the trenches very well. This standard was maintained through the hero's recovery from war wounds and on through his trip as a stowaway to New York City.

After this, the story floundered. Unfortunately, I struggled to keep track of the plot from this point. I did listen on to the end, and it had its moments, but overall it was a disappointment given its initial promise.

The narrator was unsuited to the job. The hero was a working class Cockney, and most other characters were American, but he delivered the whole narration in a middle class English accent. This didn't help my understanding of the story, and definitely didn't breathe any life into it. I honestly think I could have done a better job myself.

I also found the big explosion in Manhattan at the end quite bizarre. It was somehow meant to show that the war had come to America, but it didn't really work for me and I just thought the story had lost its way.

One of the most beautifully written novels I've heard/read in a while. Evocative language and shifting perspective make Dizzy City an intriguing novel.

What would have made Dizzy City better?

The worst ever, could not finish listening to the book. Monitone voice, so boring, hated it, dont waste your credits.

What was most disappointing about Nicholas Griffin’s story?

Use a better narator with charactor

Story could have been so interesting, just couldent stand the voice

Part of a good novel

I agree with "Lost in Manhattan." The first part of the novel detailing the main character's upbringing, war experience, and initial time in America is absorbing and shows promise. Suddenly, without reason or warning, the point of view shifts. With that shift, I completely lost interest even though the con game was supposedly becoming more complex at that point.

The reader made no sense at all. Everyone in America had an English accent. There are many other readers who could have done a much better job.

Good beginning.....fizzled out in the end

This book was written in a very clever way. As I read and the story unfolded, I became quite involved in trying to figure things out. The characters are interesting and the various parts of the book give background on how each got to where they were in the story itself. As I said, clever. However, the ending was a total dud. I rarely give a book 3 stars - either I really like one or I don't.....I gave this 3 because I did like it - until the end.

Way too slow. I kept with it for about five chapters then threw in the towel.