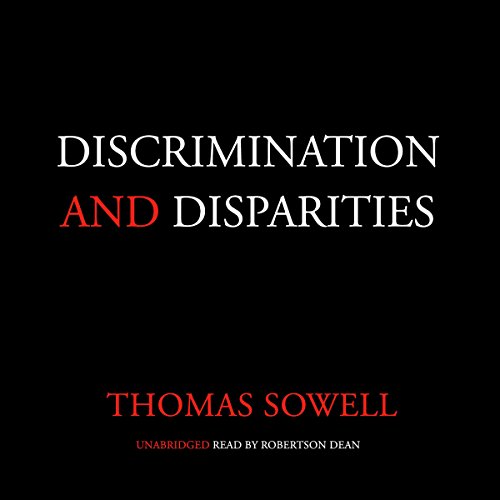 Discrimination and Disparities challenges believers in such one-factor explanations of economic outcome differences as discrimination, exploitation, or genetics. It is listenable enough for people with no prior knowledge of economics. Yet the empirical evidence with which it backs up its analysis spans the globe and challenges beliefs across the ideological spectrum.

The point of Discrimination and Disparities is not to recommend some particular policy "fix" at the end, but to clarify why so many policy fixes have turned out to be counterproductive, and to expose some seemingly invincible fallacies behind many counterproductive policies.

The final chapter deals with social visions and their human consequences.

Hard Pill To Swallow - I’m better for it

At first I was not really interested in hearing about how in the economist describe discrimination and disparities. After pushing through and re-reading, and re-reading again and again Thomas Sowell has more than one good point. It was hard pill to swallow.

I’m a Self proclaimed a liberal and this book really provided depth and some challenging conversation with myself. I’m better off pushing through and reading this book. Thomas Sowell reminds me I need to think critically and broadly and focus my efforts on the implementation science of well intentioned public policies.

Thomas Sowell is a national treasure!

87 year old economist and author Thomas Sowell, PhD, has published over 40 books and hundreds of newspaper columns. 27 of those books are available at Audible. I usually purchase all of his books in hardcover, but Discrimination and Disparities is the 4th of his books I have reviewed at Audible. He dedicates this book to 81 year old Dr. Walter E. Williams who is an economist and his ideological soulmate in the classical liberal movement.

No one writes and speaks about facts and statistics more convincingly than Thomas Sowell. Discrimination and Disparities, released this month, should be required reading for every college freshman in the US. At 5 hours it is a short read, but long enough to destroy many commonly held economic myths. Since Sowell stopped writing his newspaper columns 15 months ago, I have missed them. This book reminds me yet again of the intellectual giant that Thomas Sowell is.

I recommend this book as well as ALL of the others Thomas Sowell has written.

Highly recommend for seekers of facts

I enjoy Thomas Sowell's books, and will probably continue buying them as long as he publishes. However, you should know what you're getting; this one doesn't offer anything you have not previously heard if you've listened to his other books; it's the same concepts, just moved around a little and wrapped in a slightly different theme. Robertson Dean's narration, is, as always, perfect.

An excellent set of new insights and summation

This is an excellent addition to Sowell’s writing. It has many new, much needed, insights and analysis. He further draws on many of his prior writings and sharpens their implications. It is a powerful distillation of much of his work. He is an invaluable source of clear thinking on complex topics.

A must read during this difficult time

disparities dont always mean discrimination. this key focus of the book was by far the most influential take away. history and facts riddle this amazing work

plan to buy kindle version for the statistics

fantastic thinking and commentary from sowell. I consider this a Capstone of his race and economic works to date

Every human alive needs to read this beautifully written, nuanced exposition on statistical reasoning. It contains the most elegant, devastating criticisms of modern policy prescriptions I have ever read.

That being said, I at first thought this book was narrated by a computer. Narrator does an adequate job, but it felt somehow plastic/manipulated. This might’ve been caused by too much noise removal in post production—who knows?

Very interesting and insightful, but not perfect

The book is filled with interesting examples, multi-angle exploration of controversial issues, eye-opening statistics.
It had a very strong and engaging opening, although towards the end, I felt, it was too much about the racial struggle in the U.S.. Not so much about disparities, as just the history of the conflict.
Still, I believe this book is a must-read and I highly recommend it.

If you were to recommend just one book by Thomas Sowell to a friend with no knowledge of his writing this might be it. Short and easy to understand, it is packed witht Thomas Sowell's wisdom and gives a comprehensive description of his outlook on the world. Highly recommend.

Should be basic education

Thomas Sowell should be resd by everyone inside and outside the united states to get a better understanding of the present, the history and the future.

Many of the points, that I've heard from some of his other books were reiterated here, in a shorter form. Yet those are points deserving repetition.