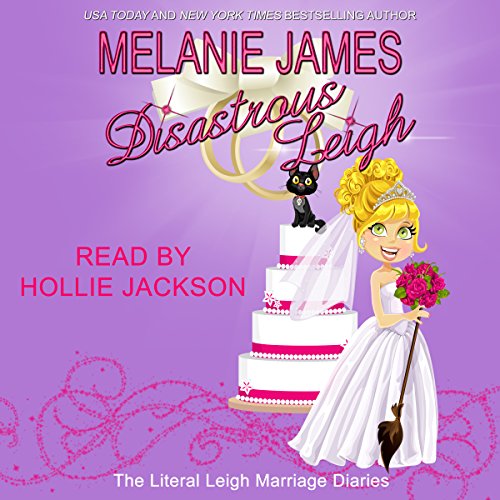 Planning the perfect wedding can be stressful, even for a seasoned witch. But for a newbie like Leigh Epstein and her coven of zany BFFs, it's more like running a 100-yard dash through a minefield as they prepare for the ultimate paranormal wedding.

Leigh takes a break from writing her latest paranormal romance novel, Shifty Blades of Fae, when her friends take her out for a night of shameless depravity filled with witch's brew, shape-shifting strippers, and unfortunately, arrest warrants - aka her bachelorette party. The gang soon finds out they are once again up to their necks in another mystery.

Join these hapless witches as they confront Voodoo practitioners, faeries, selkies, demons, ghosts, dragons, and more. The witches even run into the washed up heavy metal band, Twisted Shifter, as they mount a comeback. It's a journey fraught with hilarious disaster at every turn. In this wedding gone wild, will Leigh finally get to say "I do"?

Would you listen to Disastrous Leigh again? Why?

Yes this series is amazing and keeps you laughing.

I love Hollie's voices! She does a really amazing job with this series!

Its a big white Cock!

Melanie James has done it again! I so love these witches, you never know what they are going to end up in next, but you know it will be fun.

The reason I love Melanie James' books is simple. They are some of the most hilarious, yet thought provoking, characters available on the internet. If Rosanne Barr, Buffy the vampire slayer, Lula, and Haely Cuoco all sat down to dinner at Chuck-E-Cheese, you MIGHT be able to comprehend the hilarity that has ensued in this series... maybe. Add in the weirdness of Charmed, and I think you might get the picture. I really wish this had been a tv show, not beholden to the "charged" status of my headphones. I probably would have pulled an all-nighter! WARNING: If you are over 40, you might want to make sure you are rocking some Depends, before you press play. Trust me...I've done a lot of laundry today.

Wow, what a book! Disastrous Leigh is laugh out loud funny. The things that happen are just too funny to keep it to yourself.

Melanie James is an author on my go-to list. Her stories and her creative mine have never let me down, and I don't believe they ever will. She is brilliant, and I hope I get the opportunity to listen to the rest of the series!

Hollie Jackson is another favorite of mine. The way she narrates will blow your mind. She does great at changing her voice up to make sure you know who is who. So great.

I love Melanie James!!! Laugh so much my face hurt.

I absolutely love this book and Melanie James. I have never laughed so hard I actually woke my husband up. The characters are awesome...Leigh and Hunter are getting married so the families come to help with the wedding plans. Hollie Jackson narrating makes the story come alive and you can picture it like a movie. This is a must listen or read book, if you are looking for a fun enjoyable book here it is. I can't wait for the next book.

I was give a book in exchange for my honest review.

If you could sum up Disastrous Leigh in three words, what would they be?

how Leigh reacts to things

it was all my favorite

I laughed till I cried

Where does Disastrous Leigh rank among all the audiobooks you’ve listened to so far?

One of the best audiobooks I have listened to!The book features some incompetent witches, Fae, Striper selkies , monster cocks, hippies and traditional Jewish parents and amidst all the crazy I found myself laughing non stop.

Hollie captured every character in a perfect way. You felt the madness, happiness, confusion, felt the magic in the air .

On top of everything else there is a mystery to unveil, a wedding to plan, a book to write, someone is turned into a chicken (multiple time)or not. You will have to listen to the audiobook to find out.

What other book might you compare Disastrous Leigh to and why?

Karma Inc by Melanie James and the Rock Chick series by Kristen Ashley.

Both feature ordinary people who face dire situations , they enlist the help of their equally incompetent friends to help them solve mysteries and catch the bad guy/witch etc.Both series have top notch writing.

They introduce secondary characters you love to learn more about and am happy when they get their very own spin off. Both series are mostly low on angst, are dull of laugher, friendship, female leading ladies who support one another.

There is obviously romance thrown in, but through it all the female lead keeps her independent spirit.

I loved loved Gertie!! Gertie is so full of love (towards humans, witches, monster of eve kind) , generosity, and sense of right and wrong.It doesn't stop her from being clueless and disastrous.


Here are a few examples:

“Is this emergency services? We have a cock down.” “A cock down?” “Yes, a huge cock. He got into a tight spot, got stuck in there. He drank something and he went limp, fell out. My friends are pumping on him and trying to blow him back up.” “Are you aware of how serious it is to make prank calls to 911?”

Then Gertie said something that made a lot of sense. “Sometimes you do something because it’s the right thing to do. If you do it because you think you’ll get thanked, well then, you’ll be sorely disappointed. You’re more likely to get crapped on, but that’s okay. You saved a life and that’s all that matters.”You can't help buy love her!!

If you could take any character from Disastrous Leigh out to dinner, who would it be and why?

As much love as I have for Leigh and her motly crew of friends, I would choose Ezzy.


She is bold, beautiful, faces every challenge head on, is a true witch who knows how to preform magic, takes no bullshit, believes in Karma (read the spin off series) has a dirty mind :

...“Hunter’s massive shlong, of course. His custard-chucker, the old pork sword. I’m talking about the thing that looks like an Oompa-Loompa’s leg hanging from your man. I’ve seen that thing. It should come with a warning. What were you talking about?”

....Sometimes, we find things that give our lives some sense of meaning, like doing something good for your fellow sufferers. Magic can do that as well. And if we’re really lucky, we might find someone else to go along with us. You’ve already found that. In fact, you should bring him in here right now and have wild, crazy sex. Right here on the floor. Because not only am I a life coach, I’m a damn good sex coach. Just ask Kelly. I’ll just stick around to see if I can give you some pointers…or lend a hand, or a tongue, or…whatever. By the way, do you think Hunter would be open to some pegging action?”


There is no one else I would rather hang and dance naked in a bar with !

Buy the audiobook. I guarantee hours of fun and entertainment.After listening to 'Disastrous Leigh' I bought the entire 'Literal Leigh Romance Diaries' series . I have to know how the madness started.

All of Literal Leigh stories and this one just might be my favorite! Leigh and her friends are back at it with this hilarious tale of bridal showers, grand theft, wars, shifters, and of course the wedding. I laughed so hard several times throughout this book! Can't wait to see what is in store for Leah and her friends next!

Laugh till you CRY!

I received the audio version in exchange for an honest review..
Now that that is all out of the way…. This is a first for me by this author where have I been living!!!
I FREAKING loved this book. Not only is it well written, but the narrator was awesome a joy to listen to. I am not blowing smoke either. You feel a part of all the craziness these guys get in to.
I love how funny and witty the characters are. Without it feeling like they are trying to hard to be funny or witty. Melanie’s book is seamless easy to listen to, has me laughing to the point of crying. I find myself repeating some of the one liners!
This is also a first witch book for me, but not a first paranormal by any means. It will not be the last that is for sure.
Pretty much if something could go wrong it did. Leigh rolls with the flow and takes it like a champ. She doesn’t let it her get her down oh no. She not only goes with it but she does it with humor and grace.
Examples – Cats that carry scrolls, giant Roosters, invisibility cream, witches brew, insta’men. What a hoot.
Hunter holy moly I want to lick the man. The way everyone… I mean everyone talks about him in the book I swear he can be my newest and only book boyfriend… well until I read something new lol.
He is perfect for Leigh; he goes with the flow and is there for her when she needs him. Even if he is not comfortable with a lot of what happens. You know he loves this woman to the end of the earth to put up with some of the things they get in to. But isn’t that what love is all about.
“That’s what he said.” Oh my god I don’t want to give anything away but let’s just say that was so freaking hilarious; you will be in stitches.
The chicken when you come to this part of the story and the 911 call, I seriously had tears rolling down my face I laughed so hard.
All the shenanigans that go on in this book is just that, awesome and totally a book I want to be in and re read again and again.
“Nearly fool proof…. Nearly” Oh lordy be… what a hoot!!

I have to admit Melanie was a new author to me and I had not heard Hollie read before but these two have put together the best series. Melanie does an absolute fantastic job of writing a book that entertains and keeps you involved. Hollie reads so well that it is hard to listen to others.

This book is amazing. I laughed at so many parts I can see these characters getting into trouble and trying to get out that it is beyond comical.
Thank you for a wonderful book. Off to get others.

The story was cute. The voice of the narrator was kind of annoying! It was a bit whiny. Don’t know if I can stand it to continue the series.