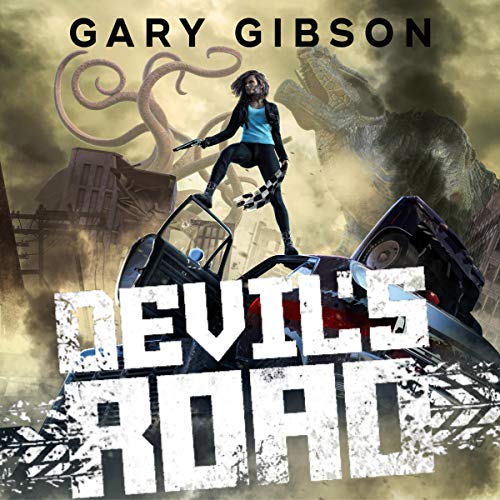 Nobody has taken part in the Devil’s Run annual road race as often as Dutch McGuire and lived to tell the tale.

The racecourse circumnavigates the post-apocalyptic ruins of Teijouan, and with a choice between being eaten by the monstrous Kaiju that prowl the island’s devastated cities or murdered by her fellow racers, the odds against surviving another Run, let alone winning it, are slim.

Dutch doesn’t care about the odds nearly so much as she cares about getting back behind the wheel of her beloved Ford Falcon - except for one problem: She’s spent the last five years incarcerated in a high-security prison for her part in a heist.

So when a crooked billionaire offers to put her back in the race on condition she uses it as cover for a secret retrieval operation, she can’t refuse.

Can Dutch survive assassins, monsters, and psychopathic drivers long enough to complete her mission as well as take part in the race - or is this the year death finally catches up with her in a blazing tangle of wreckage?

Kijiu, killers and cars all stalk Dutch as she breaks out of prison to get thrown into a race for control over a rift to another world. This book is Death Race mixed with Pacific Rim and all fun. Great narration!

So what do you do when Japan is virtually demolished by an unknown quantity and the nature of the island is essentially chaos incarnate? You have a race and broadcast it and make tons of money. Why study it why study the creatures. Get some fast cars slap armor and guns on em and charge!WARNING I almost had to cut off a star for overall and performance. The narrator repeatedly pronounced the word “coupe” “Koop” as “coupay” like toupee. This drove me batty and distracted me from a great story and narration. That being said while I am American and used to the pronunciation as coupe=Koop I realize the author is from the UK and that is the pronunciation there so I cannot take off a star just because it’s not how I want it pronounced. Enjoy! I was voluntarily provided this free review copy audiobook by the author, narrator or publisher

I really enjoyed this story and I hope there's more in this world dealing with the rift, what caused it and what some of the bigger implications of it opening are. Great performance and voice talent as well, really pulled me in to the story. I received a copy of this book in exchange for a fair review.

I enjoyed the characters and story. The most interesting thing about the story for me was the world and the twists in relation to how it got to be as it is. The only thing I didn't like about the narrator was her Australian accent, which bugged me throughout. Other than that she was great. Enjoyable listen!

The Devil is in the Details!

What a great concept… holding a car race thru the post-apocalyptic ruins of a Japanese Island controlled by Kaiju monsters. Dutch McGuire is unexpectantly aided in her escape from a Russian prison, but that aid comes with a price… Dutch is expected to drive in the Devil’s Road Race for a crazy billionaire who wants her to retrieve something valuable on the island and use the race as a cover. This race presents many challenges for Dutch, if dodging monsters wasn’t enough, she is being pursued by assassins while competing in a race amongst a group of crazy psychopathic drivers. I really enjoyed this book; this would make a great movie. I wish this book was longer with more detail on the Rift which caused the release of monsters onto the island but hopefully this is the beginning of a new series. Narration by Aleksi Graves was excellent… Gary if you decide to continue this storyline please do not change narrators for future audiobooks in the series. This book was given to me for free at my request and I provided this voluntary review.

Devil’s Road is a post-apocalyptic, death race through multi-dimensional monsters fill with backstabbing, hitman and a few twists. It starts with a jailbreak and keeps the action going throughout. Dutch is a fun lead to follow and easily likable. Definitely worth the listen.

The book was mostly a drive through a post apocalyptic wasteland that had been ravaged by Kaiju that had emerged from a portal.... how original. The problem is, there really weren't all that many Kaiju. There were one or two real giant monster scenes and a couple small monster scenes. It wasn't a horrible story, just nowhere near what I had imagined.

What a great ride. Fast cars, guns, Kaiju monsters. Aleksi does a great job narrating. Gary builds a world I want more of. Can’t wait for book 2. It was cool listening and driving at the same time. I want to race too.

Really liked the narrator. She was amazing. Characters were very relatable and had great stories. No dead moments during the story and had to keep listening.

Relentless and a total blast!

Relentless and a total blast! Gibson pushes the narrative pedal to the floor and keeps it there till the end. It's a tight, fast story. I don't know that I could say anything more that wouldn't be spoiler or that you couldn't read from the blurb.