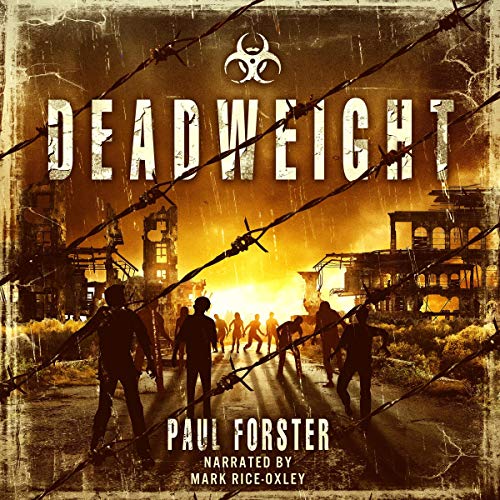 It was hailed as the answer to the obesity epidemic; a pill that allows you to eat anything you like and still lose weight. Millions were attracted by the promise of a leaner, fitter body, but there was a fatal and unforeseen flaw in this new panacea.

A tiny microbe, lurking within, slowly infects the users. In turn they pass the infection to others with a sneeze, a cough or a simple kiss, and before long tens of millions are infected and turned into mindless, shambling wrecks, with the sole purpose of existing to eat.

The virus is rampant, reaching into every corner of the globe. Governments collapse and shut down, unable to contain the outbreak, while the army works hard against the unending assault in a desperate bid to stop the dead from total victory. But there are even greater dangers to be faced. A few unfortunate souls suffer with the hunger of the dead but the mind of the living. They are neither dead nor alive, but something in between; something far more dangerous to the surviving humans. And amidst this carnage of the end of the world, in the south east of England, a small group of survivors are fighting on, against all the odds, as they try to stay one step in front of the dead, trying to avoid being the next item on the menu.

The question is, in a world now claimed by the dead, what will they have to do to survive?

Deadweight is an excellent addition to the genre. Despite how many zombie books us enthusiast reads, we can never get enough. Paul Forster delivers a well-composed, engaging, and exciting storyline with a unique zompoc scenario. This time around, a weight-loss drug starts the zombie apocalypse. The plot flow-smoothly, keeping the readers/listeners engaged. The characters are well-developed and diverse, and I liked how the point-of-views and time-lines changed, giving the audience a better insight.

Mark Rice-Oxley's narration is well-paced and clear. Overall, Deadweight is enjoyable and entertaining, and I would listen to a second installment. I received a free review copy of this audiobook at my request and have voluntarily left this review.

I listen to Zombie Audio books literally 5 days a week while a work - Thus I guess I'd likely qualify as an "Expert of Zombie Novels" of sorts at least at the Audio book level. For those who enjoy zombie fiction - we all know they will eventually follow a very similar story layouts, which we come to respect at a level. Thus - THE TRUE VALUE of a newly emerged zombie universe ends up falling in the arena of the Creation Theory. Sadly, most newly released audio books I've come to discover totally gloss over the Creation Theory or follow the same old monikers that align along Government virus weapons testing, etc. Well, HATS OFF to PAUL FORSTER for a Genuine new Creation Theory that is actually good! Well done sir! 5 out of 5.

I would probably be one if the people that would try the pills! Now.. I think if anything comes out I will watch and wait and see what happens! Really enjoyed this book and narration. Great characters and story line.

Finally, a zombie book that is new and original. A new concept. A new idea. I absolutely loved this book. Halfway through I stopped listening and started from the beginning again just to extend my enjoyment. I’ve read and listened to over 70 zombie books and this is my favorite. Can’t wait to start book two.

I’ve had this a while and had forgotten about it. It popped up on FB and I had to start it right away. OMG it’s so good. I need the next one! I love the new ideas and take on some of the smart zombies who can pass and want to know more about the ‘big ones’ as they are referred to.
Mark Rice-Oxley did an amazing job narrating.
I was given this free review copy audiobook at my request and have voluntarily left this review.

zombies in the UK

a different twist on the zombie narrative. I enjoyed the characters and the story, but it ended with the feeling that another book or sequile is coming and many of my questions weren't answered

This was good.I was a lot like the other zombie books out there.I found it more greusome than one I like.Mark Rice-Oxley was a fine narrator.I was given this free review copy audiobook at my request and have voluntarily left this review.'

the story is a great walkway into the world becoming festering with zombies.

sadly I'm not sure if my Alexa speaker is going bad but the narrator seemed to crackle my speaker so don't play on loud if you listen on Alexa.

a little slow starting but overall it's a great book set. once you start, it's a no stopper