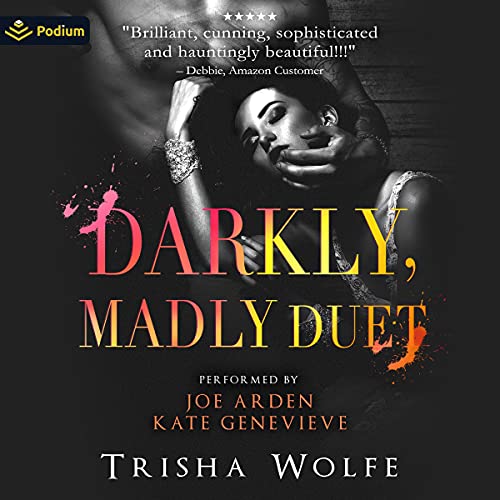 He challenged her sanity. She shattered his reality. They dared each other...to the brink of madness.

A dark and twisted maze awaits criminal psychologist London Noble when she falls for her patient, convicted serial killer, Grayson Pierce Sullivan. As she unravels the traps, her sanity tested with each game, she's forced to acknowledge the true evil in the world around her.

Duet: a performance by two. But who is acting, and who is devolving?

A buried past is unearthed, and Grayson Sullivan - AKA The Angel of Maine - retaliates against the system who made him, deploying psychological warfare on the woman who initially set him free. Dr. London Noble probes deep into the mind of the killer she’s fallen for, searching for answers, as a copycat killer threatens their unity. Are they partners, lovers, or enemies? One final trap will reveal all.

This is the first of Trisha Wolfe's talent that I've experienced and it left me reeling. She doesn't just stroke the darkest part of humanity, she shakes it awake! I felt torn that I could embrace London and Grayson while telling myself I shouldn't. I'm now a total fangirl. Kate Genevieve and Joe Arden brought life to these characters. I could see the story as they pulled me in.

Holy Moly, I'm soooooo impressed with this one!!!!! Trish did her research!!!!!! This was so thought out, cunning and sadistic that I can't believe everything that was laid out in this book! Can you tell how excited I am with these exclamation marks? A huge mind blown. So many things I didn't see coming. I can also see this become a movie. You will not be disappointed with the pace of this book because you will get sucked into book 2. So good. The narrators were perfect for this book. This is one of my top reads/listens of 2019!

Wow! This one was sooo different in terms of where the story went. A lot of things were unexpected and I loved that! I'm really impressed with how everything turned out. I can't wait to read more of Trisha's work. I'm so glad I listened to this one audio and I have 2 more of Trisha's audios in my que.

Also I LOVE this cover!

First of all, I am so thankful that they combine book 1 & 2 and made it into one audible book. Thank you so much. The first half of the book was really interesting but I kind of got bored towards the end.

This book surprised me, shocked me, scared me

Satisfied me. I loved the story and the narration. I didn’t know who was playing who and I appreciate the suspense. It was hard to turn the book off and I didn’t want it to end.
The book is dark but I recommend it.

Took my emotions all over the place

I didn't know whether to love or hate the serial killer. That's where this book took me. It's like watching walking dead and wanting to like Negan...
Joe Arden gave a stellar performance - going creepy and pulling you in. I couldn't stop listening to this story to see where it would go, I just had no idea what these characters were about and what the endgame would be. The story unfolded and kept me glued to it. I feel I need to listen to it again to get it all. There were layers to get through, some twists and turns, and a lot of "what the..." that just kept my interest.

London is a criminal psychologist that takes on the minds of twisted criminals and helps prepare them for trial as well as preparing herself to testify, whether for or against them. Her latest patient is a serial killer that bends her will to do the right thing and obscures her ability to stay professional. He is truly sadistic and has a rhyme to his reason. For all the right reasons, she tries to analyze him and winds up finding a lot out about herself.
Grayson has a plan and played the right way; he will get what he wants…he always does. His latest project must be executed perfectly so that he can finish this sadistic game and show London exactly who she is…. just like him.
I enjoyed listening to this duet. It was sexy, adventurous, and suspenseful. I did want a little more resistance from London, but that didn’t take away from the story. London is very vulnerable after she recalls things from her past. She knows she is taking a chance with her career by getting involved with Grayson, but she must face her past because he won’t allow anything but her cooperation. Grayson is a true Alpha through and through. There is no room for error and in his plan to dominate London and bring her to the realization of who she is. A dark, psychological thriller with lots of close calls, mystery, and lust. Very enjoyable! 4 Stars!

If words create magic, then Trisha Wolfe is a motherf@cking magician--a master illusionist that tantalizes with gorgeous prose, slays with emotion, depth, and detail, leaving me in awe struck at the power she wields with mere words. Not many authors have the capability, the talent or the grit to garner such a reaction from me but this woman, this sorceress, does it every time. Her dark matches my dark and her words own my soul.
"Good things don’t emerge from basements and cellars… Dark things do." ~Grayson

Born, Madly and the Darkly, Madly Duet is an epic masterpiece that follows the relationship of two souls born of impossible circumstances, thrust into a world they can’t possibly survive, shouldn’t survive, but damn if they don’t try. And what a breathtaking, twisted experience it is.
‘We’re a fucked-up kind of inevitability. Not fated. Doomed.” ~Grayson

"A finality with a standing ovation."~Grayson

I’m so very sad to see this duet come to an end but I am excited to see what other magic this author has up her sleeve.

Narration gets an A+ .

OMG yyeeeeesssss these books were amazing just absolutely amazing I wish it never ended.... will definitely be listening again

It was a very interesting start, as was the ending. The story, in addition, to the rich plot, was suspenful, full of surprises, plus kept me in pins and needles. The story reminded me of the TV Series, 'The Fall' with Gillian Anderson and Jamie Dornan. It contains some sick scenes, like in chapter 35. It took me awhile to like these characters, despite the great performances of the narrators. Love the writing, first time I read anything by Trisha Wolfe, and also enjoyed Kate Genevieve's performance, she's someone I will look to litsen to again. Joe Arden, never cease to amaze me, he's just simply gifted with accents and a superb narrator.

Trisha Wolfe's writing style is brilliant, and I am also in awe of the research that must have gone into this story. Her writing is vivid and graphic, which I did not mind for the steamy scenes (obviously 😜) but the violence of those heinous crimes was kind of difficult to get through. It really was like watching an intense thriller with that edge of your seat suspense. She certainly pulled me into this twisted story and had me chained to this genius storytelling.

Grayson is a psychopathic serial killer, to be fair a sexy one with an Irish accent but a killer nonetheless. London is a criminal psychologist with dark tendencies, which she tries to cloak with her psychology and treatment methods of patients. London finds herself fascinated by Grayson and his mind, which puts her on a dangerous path of self-discovery and soon in the middle of a psychological mind game of chess with him.

You really think in the beginning and throughout, how the hell can this story have a happy ending and has it one? I was drawn into this book and could not stop. London and Grayson’s story fascinated me in a way that I still cannot comprehend. The mind and psyche are a powerful thing and has you thinking of what makes people tick and why. This story certainly provokes some thoughts of the kinds of monsters out there.

This was the first time listening to Kate Genevieve and I really enjoyed the tone of her voice and performance of the different characters giving each one a different layer and personality.

Well, Joe Arden needs no introduction, he even makes creepy sound sexy, especially with an Irish accent. I really enjoyed listening to him getting into the role of Grayson and giving all these characters his own creative spin, another perfect performance by Mr Prolific.