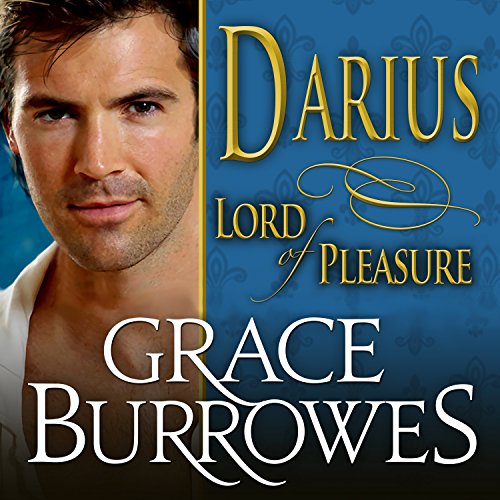 The elderly and ill fourth Viscount Longstreet summons Darius Lindsey to a discreet meeting, where he proposes the means for Darius to extricate himself from a life of shame and repay his family's debts. William offers him a chance at redemption: Spend a month with his wife, Lady Vivian; get her with child; and he can retire from his life of degradation.

As weeks pass, Darius makes love to Vivian but also teaches her how to deal with the world after William has died. Vivian cannot comprehend what Darius has done to safeguard his family or why he protects her from those who would cause her harm.

When the time comes, will he be able to prove the depth of his love for her and their child?

Darius and Vivian will touch your heart

Darius -- my favorite Lonely Lord book-- is just as good in audio. Fine job by Roger Hampton (although I do wish his female voice was not quite so falsetto).

Darius Lindsey, second son of the Earl of Wilton, is a secondary character, in The Virtuoso (Duke's Obsession, #3), as Lord Valentine Windham’s friend who helps him restore the run-down estate that Val won in a card game. (And how odd it is that these sons of an earl and a duke are such competent carpenters? Well, we’ll let that slide.) Darius is broke because his evil father has cut his allowance. Why does Wilton treat his children so cruelly? No idea. Why does Darius’s sister Leah need his protection? No idea. Why is Leah tainted by scandal? No idea. (But fear not, you’ll get answers if you read the next book, Nicholas.)

To keep the wolf at bay, Darius is a sort of man-ho for two ladies with bizarre sexual tastes. He refuses to engage in actual intercourse with them, but allows them to enjoy their peccadilloes. He hates them and himself, but he’s desperate to keep up his modest country estate, protect his sister, and support an adorable boy who may, or may not be, his son. Enter Lord William Longstreet, an elderly, highly respected politician married to a much younger lady. He and his late wife had two sons, but one died at Waterloo and the other in a duel. Thus, Longstreet has no heir, and upon his death his estate will revert to the Crown, leaving his wife virtually penniless. After discreet investigation, he has picked Darius as the man he wants to hire to impregnate his wife, and he offers Darius a fortune to take on the job.

Vivian Longstreet is, as Darius later puts it, a “married spinster.” She had been the hired companion to the late Lady Longstreet, and after that lady’s death, William married her to save her from falling under the dubious protection of her greedy stepfather. She has reluctantly agreed to her husband’s plan but has no real expectation that it will work. When she and Darius meet for the first time, though, they awkwardly enjoy one another’s company and agree to go forward with the plan.

You know where this is going. Darius and Vivian spend a month at his estate, uneasily at first but then passionately, and she returns to her husband. They don’t admit the love between them; they both know that they can never even acknowledge one another in public, and Darius can never be a true father to the child that she is going to have. I love the way the author gradually built up the relationship between Darius and Vivian. We get to see that he is a truly good man, despite his flaws, and deeply protective of those he loves. With Darius’s encouragement, Vivian comes out of her cocoon and enjoys herself. In addition to the increasingly passionate sex, he buys her a new wardrobe and gets her out of her drab gowns and severe hairdo. It’s a little bit like spending a month with a cross between George Clooney and Tim Gunn. I want to go there.

Okay, I jest, but actually I found this story sweet and charming and deeply affecting. Their parting was truly touching. I didn’t cry, but I wanted to. And then when Vivian returns to her husband, he actually comforts her. “It’s all right to be infatuated with the man, probably better in fact,” adding, “Lindsey is comely, he has a certain dash, and he no doubt charmed you. Some feelings for him were inevitable.” What a sweet old bird.

Back in London, Darius uses some of William’s money to set up a trust for his unborn child. He decides to drop his two “clients,” but they are not inclined to just let him go, so they cause trouble. Vivian’s stepfather and step daughter-in-law also cause trouble. There's some excitement, but Darius knows how to play down and dirty and gladly does so to protect Vivian's good name. In the meantime, Vivian is finding ways to keep “accidentally” running into Darius at various venues around town. In public, he treats her with cold politeness to avoid raising suspicions, but Vivian is hurt nonetheless.

As Vivian’s pregnancy progresses, Lord Longstreet’s health is deteriorating. I think Lord Longstreet is a sort of secondary hero in this story. He married Vivian to give her protection at a time when he still had two living heirs. Although he’s still in love with his dead wife and spends his time reading her old diaries, he always shows Vivian tenderness and respect. It gradually becomes apparent that Lord Longstreet hoped all along for a match between Vivian and Darius, and he goes out of his way to befriend Darius, even naming him godfather to Vivian’s child. He treats Darius like a son, and Darius finds in Lord Longstreet the paternalistic affection he had never known from his own father. It’s all rather unexpectedly moving.

I have now read all of Grace Burrowes’ published novels (although she’s turning them out so quickly that’s it’s hard to keep up). As I’ve said in other reviews, she has certain authorial habits that drive me to distraction, and yet I keep reading because her characters are so compelling. I found fewer distractions in this book, perhaps because I was so smitten by Darius himself. I suspect that most readers will be smitten as well.

What would have made Darius: Lord of Pleasure better?

Narrator with a voice more appropriate for the story - more mellow perhaps??? Also a narration preferably synced to the text; this is not. This narrator makes changes in the text so perhaps that is why the text and narration are not linked??

What other book might you compare Darius: Lord of Pleasure to and why?

Hard to say. The Lonely Lord series is enjoyable but this audio version is very disappointing

His voice is too high pitched and what little I chose to listen to, was without variation in pitch, tone, quality, emotion

If you could play editor, what scene or scenes would you have cut from Darius: Lord of Pleasure?

I have returned this audiobook as it is such a disappointment. I have read Darius and looked forward to a narration but this is a distraction. I like to be able to read along or not, depending on the story, and really do not like when the narrator changes what has already been written.

I am a big fan of Grace Burrowes with Roger Hampton narrating. Darius is very emotional, with a bit more angst than I tend to seek in a romance, and quite engaging. I was invested and brought to tears a few times during the story. Worth a listen, for sure.

Interesting tidbits of history with a romance story that has several different plot lines that I haven't seen/heard before.

I love this book. I have read it many times. This is the first time I listened to it read. I cry and laugh with Vivian and Darius every time. I won’t try to retell the story. I am sure others have. It’s not filled with angst. There is no endless hand wringing. I am sure I will listen to the story again soon. I recommend it highly! It is disappointment free... This story and Flowers From The Storm are two of the all time best classic love stories.

So much longing & love 💕

Our erstwhile couple are grownups, even as Vivian has been sheltered from society (but not the awfulness of life) & Darius has been overexposed to cruelty and want by his dreadful, stingy father & the petty power machinations within society that force him to pimp parts of his body (to protect the beloved innocent dependents of his family) even as he strives to safeguard the most valuable and vulnerable parts of himself - his heart and soul.

The novel begins as both Vivian & Darius are variously being compelled beyond the status quo they’ve each fashioned for themselves. Vivian as a young matron married for convenience and protection to a viscount older than a grandfather! must confront a possible & dangerous future as a penniless widow without benefit of male protector now that her husband’s last legit heir had been killed in a duel earlier in the year. Darius similarly exists within a familial, social and financial spider web as quasi guardian of & ‘father’ to a very young bastard relation, hardworking and creative landowner of his very modest estate, good and caring brother while literally moonlighting as regency gigolo to the bored and bitter tho very rich matrons of the ton who pay a premium for his body & I think the pleasure of trying to degrade a handsome and honorable earl’s spare son who was never valued by that same earl.

Neither protagonist can continue their current lives or fashion a viable stable future - at least not without each other and the deep and mature live Burrowes creates for them.

So much tenderness amidst unseemliness ... and longing that resonated strongly for me. And Vivian’s elderly viscount husband truly comes up trumps - a prequel of his romance with his first beloved wife would be a treat!

I liked the premise of this story as well as the main characters. Some parts were a little tedious and I skipped over them. It had a satisfying ending. The narrator was good. I hate listening to women voicing male parts, so usually only listen to male or duet narration.

A little too descriptive in the sex scenes, but a fresh and interesting story! I mostly enjoy Roger Hampton's performance. He could read me " Winnie the Pooh" and I'd be happy!

This book is another example of G Burrowe's great talents in telling a story and in her development of complex and likeable characters. I fell in love with Darius...head over heels. Even though the story and characters were well-developed, I lost patience with Vivian.....such a whiner!!! She finally matured at the end, but I sure wanted to smack her.
Wonderful read....great romance.

Absolutely loved this book. Couldn't put it down. The narrator brought characters to life.