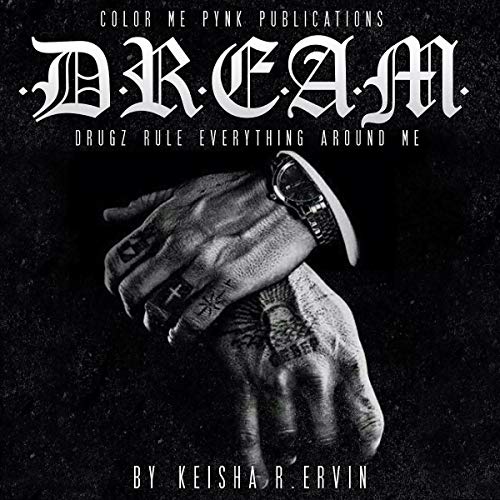 D.R.E.A.M.: Drugz Rule Everything Around Me

Older, wiser, and a li’l more heartless, India Black is existing, but she isn’t living.

After the tragic death of her first love, she’s been financially cut off by her mother and making it on her own in Philly. Full-time college student by day and bottle girl at a popular strip club by night, India is trying her best to make ends meet but barely getting by. After the day from hell, her life is turned upside down when she meets the elusive, menacing, cocky as hell, king of Philly, Dream.

Filthy rich and fine as hell, Keanu Dessalines Baptiste aka Dream, runs the streets of Philly with an iron fist. All he knows is money, madness, and murder. With a snap of his fingers, he can turn his enemies into a mere memory. Born with the weight of being next in line to run the Baptiste crime family, he wants to live life on his own terms, but being a Don comes with rules and allegiances he can’t forsake.

For India, Dream is everything she’s been trying to avoid, but he's the one man she can’t get out of her system. From the moment they meet, their undeniable chemistry takes over and all they can see is each other, but their past traumas, dysfunctional families, and callous ways threaten to end them before they even begin. What will happen when these two broken hearts collide? Will they let go and let love in or will their pride and outside forces shatter their cracked hearts to pieces?

I really hate when author’s fill they book with other ppl songs. Also you don’t have to recap the story each and every part just to fill the pages. It was more annoying than anything hearing the same old stuff over and over. We got it! This book could have been 5 hrs long and got straight to the storyline, instead of the same on, on and on recaps! Couldn’t take no more of his moms death storyline. Want my credit back asap

I love how the relationship was not rushed like most of these type of books. The book was overall well written and paced. I'm sooo ready for book 2, omg I can't wait!!

The narrator was awesome for this book. she has been the best narrator I've heard, even though I do have my other favorites. Extremely well written and read. ❤

I can't wait for the next one!

Dope book. I want to jump right into the next one! When does it come out???😀😀😀

I love the READER !! I think she made the story better bc how she acts it out .

So disappointed. Am I the only person who realizes this is an abusive relationship? As a strong black woman, this book seems more for a woman who is weak-minded. There's nothing alluring or cute about a man who berates, belittles, controls and puts hands on you...I was lost from that moment on. The book makes it seem like those things are all worth it if he is sexy, street, buys you things and is loving every now and then. What about the young women reading this book? The ones who are lost and maybe are looking for love? The ones with with no fathers, the ones away from home trying to be great, etc.? Of course it's just a book but words hold POWER. I wasn't feeling this at all. This sent all the wrong messages. The only thing that made any sense was the knowledge her mom gave her but why wait until she's grown and out your house to give her insight? This is a LOVE story??? No sequel needed.

OK the story line was decent but there were all these SONG LYRICS written throughout the book which ADDED NOTHING. I really wish writers would stop doing that. Not looking for book two in this series or anything else from this author because of that.

Wheeeew!! My heart is on edge!

Keisha!!! I haven't been so on edge,excited, and in this much suspense in forever. It has been so long since a book has made me go through ALL of the emotions! ughh. I Love It!!! I haven't even finished the book YET (I'm trying to savor it as long as I can), nor do I ever write reviews, but here I am! You out did yourself! I NEED MORE! And Nicole, You are my forever fave!!!


Please listen to this one! You are missing out if you skip over this book!

Urban at it's best.
I just finished it and I want more!
Nicole Small "amazing

Absolutely love this book and the narrator ALWAYS

Loved this book! I always love when books are narrated by Ashley Nicole!! please write more books of this stature and please please always use the same narrator.