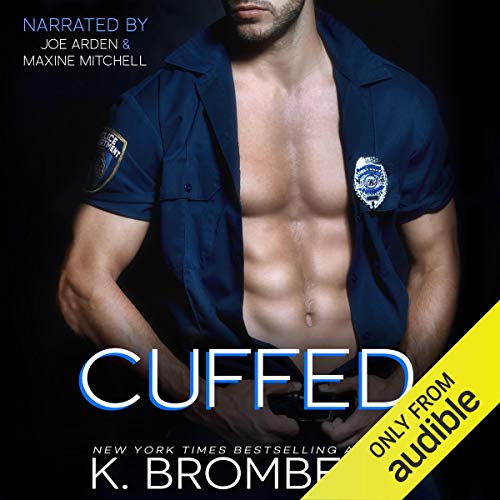 From New York Times best-selling author K. Bromberg comes a new series about three brothers, the job that calls them, and the women who challenge them.

“I hate you. I never want to see you again.”

Grant Malone is not the reason I moved back to Sunnyville - at least that’s what I tell myself. Yet, those parting words I said to him back in third grade ring in my ears every time a towns-person brings up one of the Malone boys. I thought time had healed my wounds. I was wrong. Nothing could have prepared me for how I felt when I finally saw him again.

Twenty years does a lot to turn a boy into a man. One who hits all my buttons - sexy, funny, attractive, and a police officer. But Grant is off limits because he knows too much about my past. But I’m drawn to him. That damn uniform of his doesn’t hurt either. It’ll be my downfall. I know it. What’s one night of sex going to hurt... right?

I’ve always loved Emmy Reeves.That’s why I’m shocked to see her all these years later. The shy girl I once knew is all grown up. Adventurous and full of life, she owns my heart now, just as much as she did back then. Convincing her of that is a whole different story.

I’ll give her the one night she asks for - like that’s a hardship - but when it comes to letting her walk away after, she has another thing coming. There’s no way in hell I’m letting her go this time without a fight.

Just a short warning about triggers present in this story, so if you are sensitive to child molestation as a trigger this story may not be for you. The hero and heroine in this story were best friends as children, until something happens and suddenly she is gone. Years later, she reappears in their hometown where he is now a police officer. The heroine still blames him for her departure and feels he betrayed her confidence. The rebuilding of their relationship is what the story is about and the ability of her to trust in anyone is the question. I enjoyed this book very much and the narration was excellent.

What a beautiful story! So heart wrenching!!!
There are triggers in this book for child abuse.
As a mother, my heart was torn apart in parts of this story. Then to have my heart put back together word by word.
No review could ever do this story justice!
Beautifully written and very tough subject matter handled tenderly.
Bravo Kristy! Your words never cease to amaze me!

Not for the weak of heart

Grant and Emmy have a history that expands twenty years.
Except, years ago Grant broke a pinky promise with Emmy.
Emerson's father was molesting his daughter and much worse.
Do not read this book if you can't handle this.
Years later, Grant is "Officer Sexy", dubbed by the local women. With good reason.
He's ridiculously handsome. And kind.
During one of his calls, he comes upon a little girl who is going through similar problems. Only her father likes to hit her and his wife.
Emmy runs a sky diving school.
While trying to get a loan, the bank officer, who is lower than low.
He'll guarantee a loan... if Emmy has sex with him.
When she refuses, he informs her that the school has been sold.
All in all, through all the darkness, there is a light at the end of the tunnel.
I cried for Emmy as an eight year old. And I cried for the little girl who's father beat her.
And I laughed as Grant's brothers, Grady and Grayson, invade his house regularly.
Brothers will be brothers and all that.... they, along with his parents are a force to be reckoned with.
Enjoy Cuffed.
The ending will make you really smile!
Joe Arden and Maxine Mitchell put in wonderful readings, as usual.

Regardless of the woman's history

I got sick of her whininess. I have noticed this in a number of women in stories recently and thought--can I stand to read through this shrill whiny character? It resolves ok but I really had a hard time stomaching chapter after chapter of her responses.

Good book but not fan of narrator Maxine Mitchell

Loved the narrator Joe Arden for Grant, but didn't like Maxine as the other narrator for Emerson. I felt like Emerson was the biggest winer and couldn't figure out what she wanted through the whole book for her life and Grant. Maxine sounded to old for Emerson age in the book. I actually preferred to listen to Joe Arden narrate the book more. I hope when they bring the audio for Combust book out that Maxine is not the narrator again for that next book.
Now that this was said. I'm still a huge fan of K Bromberg books but this book didn't get me feeling that I loved it and would read it again like her other books make me feel. So that is why I rated this a 3 star.

I absolutely must avoid books narratedby the female narrator. I hear a whine on the end of each phrase.

What a gem this book is! There are so many facets to this well written book. The story has so many emotions in it. The main theme I took away from the story was "Define or Fuel", with tragedy choosing to fuel the character, not define it. The topic of child molestation is difficult to hear about, but the author wrote this story in such a beautiful and gripping way. I loved how K.Bromberg wrote such truism into this book like trust is a hard thing to earn back, love hard in the present and not need to know the details of the past, heads up, wings out. Another aspect I found moving in this book was how the choice to do right, brought focus to what needs changed. Both narrators delivered so much with their performance, it was perfect. I received a review copy audiobook and have voluntarily written this review. I will definitely listen to more books by this author and both narrators, as each one is so talented. I can't wait to listen to the second book in this series! This is a standalone listen and does not end in a cliffhanger.

K. Bromberg does an amazing job of delivering characters you can't help but fall in love with. The chemistry between Grant and Emmy is sizzling to say the least. They have so much history to work through but you are routing them on the whole way.I loved the story and the feels it gave me.

Not only are we given a heart touching story but the narration is top notch! Joe and Maxine gave these characters amazing depth and really brought them to life. I loved Maxine's Male character voice. It was fabulous and absolutely added to the overall enjoyment of this book.

Great job all around- so glad I read it. Can't wait to read Combust and get more of these Sexy Malone brothers!

Small spoiler alert:
I always think it is heartbreaking when children are victims of abuse. Nothing different with that topic in this book.

Personally I had a bit of an issue with the fact that not even once did the characters even talk around the subject of trust surrounding having sex, I just figured that might be a topic to come up when one had been abused as a really small kid. But hey, that might not be strange at all.

It is an ok story for the most part. For me personally I just have an issue with the female narration, so when I had listened to a part where the male narrator had spoken, I noticed I got sort of dissapointed as soon as it was her turn again. But if you like the female narrator, I guess it is better. .

This was a hard listen. One because the content hit home but mostly the female narrator was terrible. If it hadn’t been for Joe Ardens performance I would have quit.

just too much drama

This part of series about the Malone-Brother is just too much drama.

The narrators are not bad, per se, but the female narrator constantly over-emphasizes every word. She sounds either whiny, depressed, or pissed off - and that, in combination with the emphasis - adds so much drama that it drowns out the story ... to me, it completely drowned out the seriousness of Emerson's abuse.

Speaking of child abuse, the story should come with a trigger warning. This part of the backstory is relatively dark.