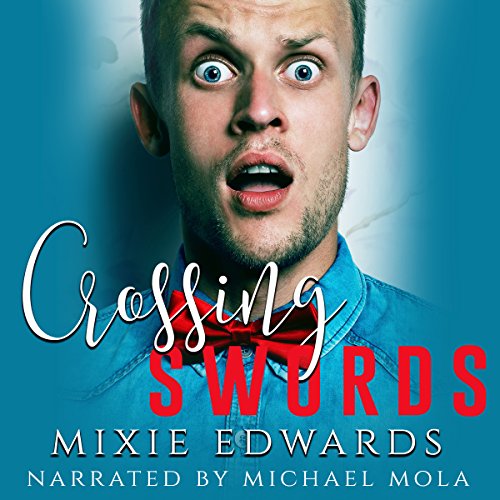 Christopher Rush is not gay.

But after a breakup with his longtime girlfriend, he finds himself crossing swords with his best friend Jeremy Pratt. Who's also not...gay.

It was a one-time thing.

It didn't mean anything.

At least, that's what these boys of summer tell themselves as they pretend it wasn't more than experimentation. With only four weeks left before they leave town for college, Christopher and Jeremy awkwardly navigate their way through a series of unfortunate (or very fortunate) events. Often leaving them breathless, conflicted, and dressed in nothing but a pair of socks.

Because socks are less gay.

As their time together comes to an end, will Christopher and Jeremy accept that love doesn't discriminate, or will they put their swords up for good?

What an ugly, hateful little story

This has so much potential... coming of age, friends to lovers, coming to terms with one’s sexuality. That potential is what kept me listening. It was never realized.

This book reads like it was written by a homophobic 14 year old who is intrigued by the idea of gay sex but horrified by the idea of gay intimacy or romance. The words “fag” and “queer” were used incessantly and not in the positive, life-affirming way. Just so disappointing.

The poor production of the audio itself is hardly the worst part of this book but it’s also notable. The narrator himself is decent but there were so many pauses, swallows, repeated phrases, and background static.

So much internalized homophobia, violence, poor communication, and essentially nothing redeeming - a woefully missed opportunity to show an arc of growth, compassion, self discovery, etc. Spent the whole time just waiting for the author to flip that switch, but only grew more and more dismayed by the negativity, not to mention, amateurish writing style.

I have never read such a homophobic book and it is supposed to be gay romance! They amount of time “fag” was thrown around by the main characters as if it was nothing made feel ill. Also, they way they talk about women in the book is awful. So much slut shaming and objectification. Also the recording sounds like it was made in someone’s garage. I could only last about 5 chapters before I had to turn it off.

If you are a stickler for politically corr ct, move along, this book isn’t for you. Silliness, immaturity and some hot sex scenes, plus humor, if you aren’t stuck on being politically correct, is what you’ll find here.

I’m sorry, but the narrator didn’t prep for this book and apparently there was no editing or proofing. Loads of mistakes by him. Numerous repeats of the same sentences and phrases in error.

There isn't anything particularly wrong with this "coming of age" story, personally, i just struggled to engage with it or become invested in the characters.

For me, sometimes the language was just too crass, there were too many misogynistic references and unnecessary "f" bombs (one 36 minute chapter uses it 61 times). I get that it's the behaviour of some eighteen year old boys, but used excessively I find it unnecessary and distracting to the story.

Given the quality of the narration/editing that is available these days, this production really needs to be better edited for background noise and repeated phrases. The narrator did a reasonable job, but I would have liked more distinction between the two main characters, sometimes I found it difficult to distinguish which character was at the forefront.

Lame. Save your credit.

Terrible story that is not only puerile and utterly unconvincing, but also homophobic and misogynistic.

Book is told from two perspectives but it is confusing as the characters are identical and they are narrated in the same voice.

The narration is poor, though not the worst I have heard. Words are mispronounced. But the audio quality is poor with loud background noise at times and many editing errors.

Such a good book!

This was such a good book! I couldn't stop listening to it! I will say they use the words "gay" and fag a lot. I can't wait to listen to more by this author 😍😍

No no no. Not a positive young gay romance

This should have been so much better than it was. The two high school best friend guys who are absolutely not gay tripping into something sounds cute and angsty. But first, as a parent, where they heck were any guiding adults?? These two have blow out parties, go to a strip club, drink heavily, etc in high school. Then there is this 17 year old violence over and over, which is credible, but also sad. This is just about high school guys having sex, lots of sex, but not growing, not LGBTQ identity, not forming a supportive partnership. I've read other great gay YA novels, and this one just doesn't make the cut.

Best story for me this year

I read this book about 2 months ago and it was so amazing that up had to get the Audiobook... so Please see my review of this book in kindle Amazon.
Story = 5 stars.. Such a deliciously hot, funny and sexy story
Narration= 4.3 stars-I would have scored the narration higher except for the background sounds. I listened to the book's twice already. Michael Mola was the perfect choice.
Overall= 4.7 stars
Charo

I absolutely loved this coming of age m/m story! Her debut is just perfect. It'd crass, funny, honest, and simply spicy! Michael did a fair job, there was some background noises that took away from some of the scenes, but overall I enjoyed it. I've reread this book four times and it's still as good as the first.

This narration is not edited!

The story is indeed very funny, but it is the badest narration I ever listened to. Sometimes (as in many times) it sounds like the narrator speaks out of a box. There are sentences doubled. On a few occassions you even hear somebody other speak on the microphone and I think I heard a violine....