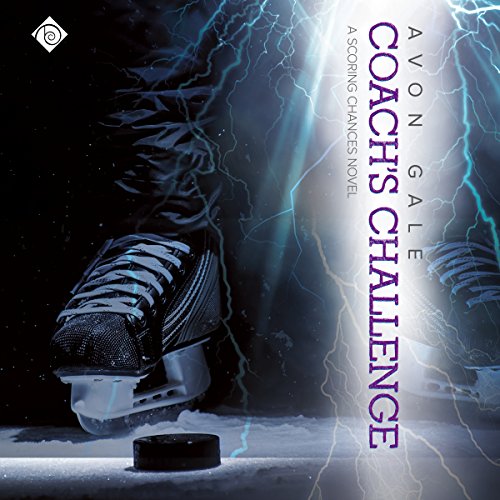 It’s been decades since blackmail forced Troy Callahan to retire from playing professional hockey, and he’s built a successful career behind the bench. When he’s offered the opportunity to coach the Asheville Ravens—the most hated team in the ECHL—he’s convinced that his no-nonsense attitude is just what the team needs to put their focus back on hockey. But Troy is disheartened when he finds that the Ravens have signed Shane North, a player known for his aggression. And it only gets worse when Shane’s rough good looks give Troy inappropriate thoughts about a member of his team, even if Shane’s set to retire at the end of the season.

Shane’s career in the majors never quite took off. Wanting to quit on his own terms, Shane agrees to a one-year contract with the Ravens and finds himself playing for a coach who thinks he’s an aging goon and with a team that doesn’t trust him, the coach, or each other. Despite his determination to not get involved, Shane unwillingly becomes part of the team… and is just as unwillingly drawn to the gruff out-and-proud coach. As the Ravens struggle to build a new identity, Shane and Troy succumb to the passion that might cost them everything.

Once again Scott R. Smith does a good job with the narration. This whole series has simply been a pleasure to listen to.

If you're into dirty talk with your sexy times be prepared to be happy!

While I can't say the fifth story in the Scoring Chances hockey series is my favorite, it's a fun read and a solid addition to the series with plenty of humor, very little angst, some great dirty talk, and a good HFN ending.

I'm definitely on board with team #TRANE.

Scott Smith is definitely growing on me...

Avon Gale is one of my favorite authors – ever! She is very gifted at writing humor and romance – together – which isn’t easy. But – in addition- she really knows how to pull at your heartstrings, too. And then you’re laughing through tears which is an amazing feeling.

I love her hockey series best (so far). Her love of the sport is evident and it comes through in her writing. Since I’m such a fan, it’s hard not to compare one book to the other – though each book is very different. So, I distance myself from my fangirl-love and try to look at each story on it’s own merits.

So, if I'm not comparing this story to others in the series, and I'm looking at this as a book on its own – there is absolutely no question that it was EXCELLENT! There's a lot of humor and the hockey is good. The general storyline is also solid.

My favorite aspect of this particular couple is their need to bicker with one another. It’s pretty hysterical – and then - all of a sudden – they’re having some really hot chemistry! The chemistry between these guys is phenomenal. (There is a particular scene where some tender things get expressed in the middle of fight – EPIC – so funny!)

I’ll only say that the lack of a character like Lane or Max is really the only thing that makes this “not my favorite in the series”. Neither of these guys is nerdish or terribly awkward and I ADORE those types of characters, so… But that’s about it. This is wonderful and everyone who loves this series MUST read it and yet it stands alone beautifully as well.

Scott Smith is definitely growing on me. There are still some nuances to his narrative that make me a little nuts – the way his sentences and emphasized doesn’t always match how I think they should flow – but his sense of humor and his ability to make unique voices is pretty good. I definitely can listen to his books over and over and that’s huge.

love it love it and great narrator

Avon Gale again hit it out of the ballpark I highly recommend this book. the story was awesome.

Full stars for Scott and his narration.

This is everything I wanted Power Play to have been. Emotions, chemistry, character development, relationship and of course smexy times.

Troy and Shane were hot, funny, open, played no mind games, went after what they wanted, amazing all in all.

I really hope Avon will continue the series. I miss her writing.

New to me narrator. Really enjoyed this series. No angst just hockey and romance with some humor.

I love this entire series and this installment was definitely no exception to that. My only complaint (and I really don't consider this as a complaint) is that I kept checking because I felt like I'd read this one before. But I honestly just think that's the nature of this series...all these romances are forbidden at a certain level so they all have that same similar feeling to them when it's been a while. BUT that's why they're part of the series...AND why I love this series so much...so again, not really a complaint...just a weird phenomenon that kept throwing me while listening to the audiobook.

So...this story... This is a romance between a coach and a player...something that really can't happen. Shane is in his final year playing hockey, so he's closer in age to the coach than most the players. The problem is that he's still in the closet with no plans for coming out before retirement. He simply doesn't want the focus of that one more thing to take focus off his career and his ability to play hockey. In his eyes, it's bad enough that he never lived up to his potential.

For Troy, his coming out forced him out of professional hockey play, so he has serious emotions about coming out before a person is ready. He was forced out of the closet. He certainly won't do that to someone else.

I liked these guys together. I like how they bond over being the 'old' men in the sport. I also really liked the interesting little quirks like Troy's puzzles. It was a fun read and another fabulous installment to this series, which I've loved.

I love Scott R. Smith's narration and thoroughly enjoyed listening to the audiobook.

I really loved Troy. He was no nonsense, intense, and hot. Shane was very easy going and was a good match for Troy.
I really enjoyed their banter and hot sex. I also loved the bartender, he was funny. I haven’t read the others in the series
But enjoyed this because the characters were older. Good story, I really enjoyed it. Narrator did a good job as well.

Another good one in the series!

I've LOVED the entire Scoring Chances series, and Coach's Challenge was no different! Hot, sarcastic, bossy, mature MEN (not boys!) who took their relationship from flirting to sexual to more, and a great audiobook narration to boot.

I've had a bad streak with Avon Gale's work recently, so I was actually nervous about starting Coach's Challenge. However, it didn't let me down at all, and I was thrilled that the audio reading was as good as I had remembered. I didn't want to stop listening, which is the best feeling, let me tell you.

Okay, if I'm being honest, this isn't the most romantic of the series. There isn't a lot of affection and lovey-dovey feelings. However, I really liked the easy, comfortable relationship between the two MCs. Their interactions were... fun. Easy. Other than a little twist thrown in at the end, it's a low drama book with the focus on the characters themselves, which is how I like it.

Scott R. Smith again did a great job with the narration. I can always tell his voices apart, and though his peppy, high energy narration and pauses take a little getting used to, I adore him narrating this series.

If you've enjoyed the other books in the Scoring Chances series, this one will be a no-brainer. It's snarky banter and sex in semi-public places and two men that know who they are and what they want. It's a good one.

*Copy provided in exchange for an honest review*