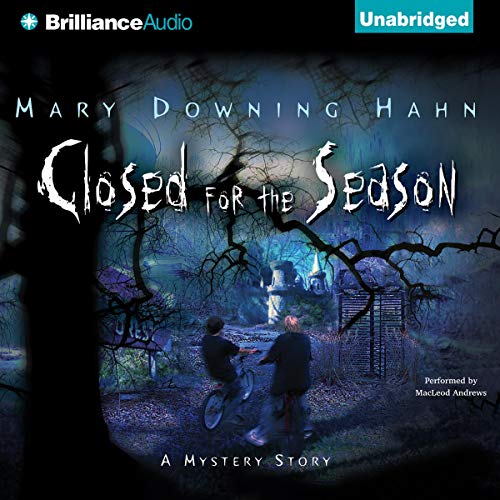 Closed for the Season

The weather-beaten sign on the gate of the Magic Forest says closed for the season. But when the boys ride up to the gate on their bikes, Arthur tells his new friend, Logan, that the old amusement park hasn’t been open for years. Kudzu vines have grown over everything, making the park look sinister even in broad daylight, so Logan is reluctant to go inside, but Arthur urges him on. He’s sure they’ll discover important clues to the mystery they’re trying to solve: Who killed Myrtle Donaldson? And what happened to the money she handled as head bookkeeper at the Magic Forest?

Arthur and Logan’s quest takes them to the lowest - and highest - levels of society in their small Virginia town. The boys must pay another visit to the Magic Forest, this time in the middle of the night. And this time they find the killer waiting for them among the shadowy kudzu vines.

I got the book for my son to listen to on the road with me. The first quarter was a good setup, but after that, it fell into such predictable beats that it was hard to stay interested. Characters are two-dimensional, reveals are revealed a mile away, and the writing was pretty heavy-handed.

There wasn't a great deal of "What happens next?" moments in the book, because they were broadcast long beforehand.

Which all leads me to the my review title. It's a lot like a Scooby Doo episode. So, for a 9 or 10 year old? I suppose this is all great. I would have liked more creepy stuff, less annoying Hardy Boys stuff.

It wasn't hard to figure out who the culprit's are, but there are a few surprises. I give this book 5 stars. I really enjoyed it.

Wonderful Story for a 5th or 6th Grader

If you could sum up Closed for the Season in three words, what would they be?

I liked that the boys remained true to on another. It also had a nice little mystery to go along with it.

Have you listened to any of MacLeod Andrews’s other performances before? How does this one compare?

It made me laugh in a few places.

This is a nice little mystery, with a good story line about friendship. Any boy or girl would enjoy reading this book.

A Little Stand By Me

This story reminds me of Stand by Me. A little. This is an entertaining story of a murder mystery. But it's more than that. It's about two boys, an unlikey pair, who find they need each other and end up becoming unseperatable friends.

A Little Stand By Me

This story reminds me of Stand by Me. A little. This is an entertaining story of a murder mystery. But it's more than that. It's about two boys, an unlikey pair, who find they need each other and end up becoming unseperatable friends.