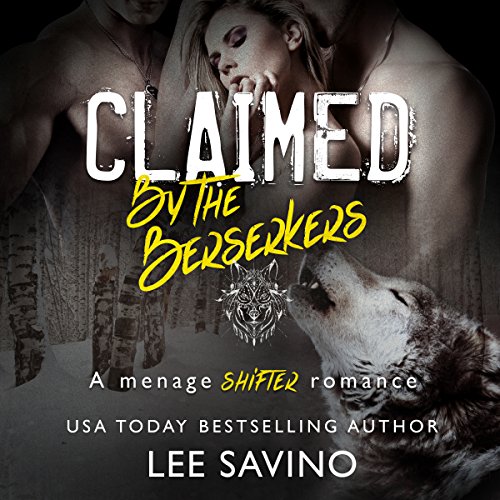 Claimed by the Berserkers

My mind and body are weakened by the curse of my magic. My three sisters have mated with Berserker warriors, but I am too frail to be a bride.

One night, three warriors break into my home. They steal me away.

Now we're on the run from the pack. These warriors tell me I belong to them and that they'll never let me go. To convince me, they spend hours giving me endless pleasure...

But there's an evil power preying on me. It wants me for its own, and none can stand in its way.

Note: Claimed by the Berserkers is a standalone MFM ménage romance starring three huge, dominant warriors who make it all about the woman. There are no M/M scenes.

Listen to the whole best-selling Berserker saga to see what listeners are raving about...

Great ending to this series! And good segway to the next series!!!! Robert Ross was an amazing narrator.

Wow! This is an intense journey with lots of fun sexy times. Love the twists and turns

This series has let me enthralled from the first. I was wondering how they were going to handle this sister’s story. I loved it. She wasn’t made into a coward just because of her illness. That made me truly happy. I’m ready for the rest of this series.

Narration could’ve been better. The story was good though. Reading would be better than listening on this series.

The narrator grows on you as the story goes. Yes, there's a lot of repetitive stuff, but Savino makes it a bit different for each book. I enjoyed it a lot. The last book is my favorite.

Claimed by the Berserkers

Enjoyed the reading. I am wondering how to get the "Berserker Bride" audiobook series. Then I will rate my satisfaction five stars .

I love that with each book there's more and more world building. Fleur is the youngest sister and the only Berserker bride allowed to choose her mates. She is the strongest and thus sick from Corpse king's minions. Her mates are unstable and they carry her off. She sees visions of the future and thinks she is dying. Through her, lots of other spaewives will be saved. I loved how they cared for her and nursed her back to health.

I enjoyed this story and listening to the narrator's accent. Listening to him describe the smexiness made it even hotter than reading it!