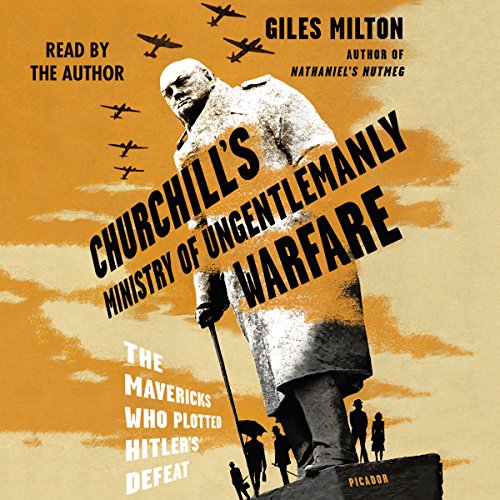 Six gentlemen, one goal: the destruction of Hitler's war machine

In the spring of 1939, a top-secret organization was founded in London: Its purpose was to plot the destruction of Hitler's war machine through spectacular acts of sabotage.

The guerrilla campaign that followed was every bit as extraordinary as the six men who directed it. One of them, Cecil Clarke, was a maverick engineer who had spent the 1930s inventing futuristic caravans. Now his talents were put to more devious use: He built the dirty bomb used to assassinate Hitler's favorite, Reinhard Heydrich. Another, William Fairbairn, was a portly pensioner with an unusual passion: He was the world's leading expert in silent killing, hired to train the guerrillas being parachuted behind enemy lines. Led by dapper Scotsman Colin Gubbins, these men - along with three others - formed a secret inner circle that, aided by a group of formidable ladies, single-handedly changed the course of the Second World War: a cohort handpicked by Winston Churchill whom he called his Ministry of Ungentlemanly Warfare.

Churchill's Ministry of Ungentlemanly Warfare is a gripping and vivid narrative of adventure and derring-do that is also, perhaps, the last great untold story of the Second World War.

"Churchill's Ministry of Ungentlemanly Warfare" was such burst-out-laughing fun that I had to stop a minute and wonder about whether it was true or not. How delighted I was to Google the mainstays and find them there, along with their exploits.
Okay, while you might read about exploits there, you'll be missing a whoooole lot if you don't listen to them here.
It starts with Joan thinking she's just applying for a run of the mill office job where she'll be making tea, and goes to where the interview swings into, well, ya think ya can handle being tortured?
There are wild personalities galore, exciting sabotage swings, Churchill being a flat-out: Let's Blow Something Up kinda guy.
Giles Milton's writing is served well by his sweeping narration, his breathless excitement, his obvious delight in what he's relaying. I can't tell you how many times I snorted with laughter.
I'm a history buff, particularly military history, so I'm used to the rather, well... "dryer" versions of what went on at a particular time. This, my friend, is anything BUT dry.
It's a rollicking rollercoaster of a ride.
And God Bless the makers of Sticky Bombs, Castrators, and the like. No matter how much Alka Seltzer, how many pieces of candy, how many condoms were used in the ingenious makings...!

I loved this book. I'm a WW2 history buff. This story of secret weapons, guerilla warfare, sabotage and brilliant weapons, tactics people kept my attention (and much, much more).

This book is not great, but terrific fun

If you like WW2, sabotage and commandos, science, quirky people, and blowing up stuff, read no more - just go ahead and buy this book. The writing gets a bit wet, but its brisk and functional. It's not Dostoevsky, it's not Proust, but I can't think of a more outrageously fun book. It tells a ripping great yarn about this period of history and how it all happened with lots of James Bond-worthy adventures and odd-ball characters. Is it historically accuratel? ¯\_(ツ)_/¯ But you'll enjoy having read it.

Great book. A must-listen for US readers.

great book. origins of the OSS and uncharacteristic British skullduggery. worth writing fifteen words about.

vary the pitch now and again!

Yes. The story is very good. Great characters, circumstances, events, and outcomes. WWII in a light one may not have considered.

What other book might you compare Churchill's Ministry of Ungentlemanly Warfare to and why?

Covers some of the same historical ground as Churchill's Secret Warriors: The Explosive True Story of the Special Forces Desperadoes of WWII.

Who would you have cast as narrator instead of Giles Milton?

Authors don't always seem to be the best narrators of their own work, it seems. I would have loved to hear Simon Prebble or Simon Vance or John Lee or several others read this book. I just found the narrator pitched it high and at the top all the way through. It was relentless! I can appreciate the enthusiasm and the awareness, but reading at this high pitch and intensity without break or nuance diminishes the information and actually at times made it annoying and occasionally hard to follow. Variation in pitch, prosody, tone is the key. It really sounded like he was shouting all the way through.

I think the book is worth a listen for its content, but not necessarily the performance by the author as reader.

Fascinating Story of a Less-Known Part of WWII

Written like a novel. It takes a while to get going, but then it goes through story after interesting story non-stop.

The narator was not good. the story was interesting . but I probably won't be listening to it again. the narraition was to irritating.

This is well written book. The reading by the author made it very entertaining. I didn't want stop listening each time I started.

About 10 books in one

Cursory coverage of what appear to be some very interesting WW2 guerilla battles. Regrettably, the book covers too many with too little detail. You could take the military actions included in the book and write a number of books with much more information.

I liked everything about this book. The pace, the plot, it’s twists and turns. Highest recommendation. This work continues today.