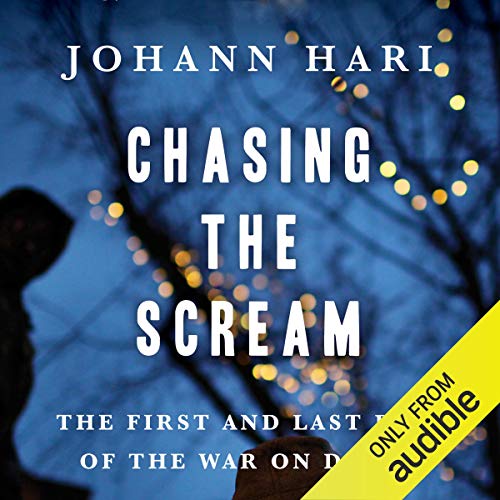 It is now 100 years since drugs were first banned in the United States. On the eve of this centenary, journalist Johann Hari set off on an epic three-year, 30,000-mile journey into the war on drugs. What he found is that more and more people all over the world have begun to recognize three startling truths: Drugs are not what we think they are. Addiction is not what we think it is. And the drug war has very different motives to the ones we have seen on our TV screens for so long.

In Chasing the Scream, Hari reveals his discoveries entirely through the stories of people across the world whose lives have been transformed by this war. They range from a transsexual crack dealer in Brooklyn searching for her mother, to a teenage hit-man in Mexico searching for a way out. It begins with Hari's discovery that at the birth of the drug war, Billie Holiday was stalked and killed by the man who launched this crusade - and it ends with the story of a brave doctor who has led his country to decriminalize every drug, from cannabis to crack, with remarkable results.

Chasing the Scream lays bare what we really have been chasing in our century of drug war - in our hunger for drugs, and in our attempt to destroy them. This audiobook will challenge and change how you think about one of the most controversial - and consequential - questions of our time.

This is worth your time....

I am a physician who has practiced a specialty of internal medicine for over 30 years.if you want advice: you should absolutely hear this book.The author makes a compelling case that most, if not all, drugs should be legalized and regulated.I believe that marijuana, opiates, cocaine and methamphetamine cause more harm than good when used recreationally.(Methamphetamine is especially harmful and is a common cause of heart failure and death in long-term users.)Nevertheless, the author has persuaded me that the harm caused by Prohibition and the War on Drugs is not worth the social benefit.Increasing numbers of young people are dying of narcotic overdoses. (Read the excellent Dreamland by Sam Quinones.) With enlightened policies that have worked for example in Switzerland – this can be stopped.Drug-related crime of all kinds – from the many thousands of horrific murders caused by the Cartels to petty theft to help support a habit – could be markedly reduced by legalization. The police could concentrate on criminals doing real social harm. The prisons would not be overflowing with those being brutalized for largely victimless crimes. The money spent arresting, prosecuting and imprisoning drug users could be spent with much greater social benefit. You will learn that many of our drug policies have been founded on ignorance and prosecuted with ulterior motives.There are aspects of this book that I disagree with. The author is not a physician and he has chosen his medical experts selectively. I believe he underestimates the power of "chemical hooks” to disrupt the human reward system and subvert the will.On the whole, he gives much credence to a lack of social connection and past psychotrama as the cause of drug abuse and addiction. I think he probably overemphasizes this influence. There are significant genetic factors that predispose to substance abuse and addiction – this is clearly true with alcohol for example. When susceptible humans meet easily available drugs there is likely to be trouble —and we must accept and be ready to cope with that fact. He freely admits that ending prohibition will probably increase the use of drugs of all sorts. But the drugs will probably be less potent and less dangerous. And the conditions of their use can be better regulated.Mental Health Services (which have not achieved the same scientific foundations or effectiveness as the rest of medicine) and other social services would be significantly challenged by legalization. They could at least be better funded and possibly evolve their effectiveness with the windfall of money not wasted on prohibition.All this said, he has convinced this skeptic that legalization and regulation is the better path. I suspect he will also convince you.

A more inspiring and insightful book I cannot imagine. Brilliantly presented and truly earth shattering. I do so hope the influences of this well researched work reach far and touch the key people who are in positions to make changes in our society.

A Must if the drug war has touched you at all

This should be required reading for anyone directly involved in the drug war. It is told in an extremely compelling fashion, and in great detail. Despite this it never lags.

What was one of the most memorable moments of Chasing the Scream?

The history of how the US government destroyed medical treatment, for drug addicts WORLDWIDE.

Which character – as performed by Tim Gerard Reynolds – was your favorite?

Chino, the drug addict illegitimate child of an addict and her rapist father police officer.

If you could give Chasing the Scream a new subtitle, what would it be?

Truth is the first casualty in all wars.

If enough people read this book, and act on it, we can bring the problem of addiction under control, and restore a more peaceful society.

I am very impressed with the authors research on this matter. It has opened my eyes and my heart to a new way of thinking about the so called "War on Drugs". Having grown up in the 60's,70's & the 80's I see how a different approach to this would have had much better results. I have lost friends to drugs and would love nothing more than to see it controlled in this manner. I suggest this read to anyone who has been or is effected by drugs for that matter anyone period!

after ensuring the bibliography wasn't filled with junk reports and checking facts with the drug guys and medical gals around campus for verification on dubious and surprising points, I can proudly proclaim that the big facts and figures are correct. I believe his worst infraction was screwing up someone's title or something insubstabtial like that.

So, I'm inspired and fired up. Can someone tell me where the revolution is scheduled to be and if they have coffee there? I'll carpool if needed.

The book is powerful. Extremely well researched. Changed everything I thought I knew about drugs and addicts. The author engages the reader from the first sentence to the last

Challenges many of my perceptions

As a recovered alcoholic and a clinical addiction counselor I'm having to look again at my own recovery and at the way I counsel others seeking recovery.

This book stands apart from others I have read on the subject - e.g. recently &quot;Narconomics&quot; - in that the author takes a very personal and humane approach to the interviewees and subject matter. This seems appropriate and makes the material more interesting than a strictly rational treatment of the subject.

However, the narration detracts greatly from the material in the book because the narrator insists upon reading passages in what he assumes would be the voice of the speaker. These voices range from grating caricatures to down-right insulting stereotypes. The narrator has a background in theater and maybe this is supposed to draw the listener in, but for me it destroys the pathos evoked by the stories in the book.

I recommend the book itself, but consider reading it instead of listening to it.

Definitive story of "The war on drugs"

Full of great historical and current stories of the creators and victims of our centuries old war on drugs. Astonishing to find that one man, Harry Anslinger, had so much to do with this disastrous global campaign.

The most important book I have read in a decade!

MUST listen! MUST finish! Will challenge you and bring you to tears. If you are a thinking adult living on this planet this is required reading. Make up your own mind about it but please don't ignore it...