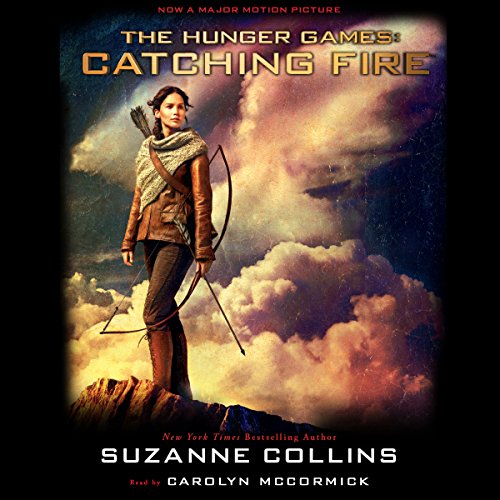 Katniss Everdeen continues to struggle to protect herself and her family from the Capitol in this second novel from the best-selling Hunger Games trilogy.
©2009 Suzanne Collins (P)2009 Scholastic, Inc.

"Collins expertly blends fantasy, romance and political intrigue (so who needs vampires?)." ( People Magazine)
" Catching Fire not only lived up to my high expectations, it surpassed them. It's just as exciting as The Hunger Games, but even more gut wrenching, because you already know these characters, you've already suffered with them." (Stephenie Meyer)
"...enough action to please Hunger Games fans and leaves enough questions tantalizingly unanswered for readers to be desperate for the next installment." ( School Library Journal, starred review)

I liked the story not as much as the fiest part, though there are some cool twists. The reader's voice though is fascinating, love it!

Would you try another book from Suzanne Collins and/or Carolyn McCormick?

I have read Catching Fire (and of course all the others) and after listening to The Help was really excited to hear Catching Fire. But from the outset it was just all wrong. The reader sounds like she is forty rather than a Katniss. It is grating. I listened for awhile but am not going to be able to finish it - I was really surprised that with content like this they didn't choose someone younger and more in touch with the content. I'm sure Carolyn would be great with other content - but not this.

Katniss and Peeta return triumphantly to District 12. After 6 months, they embark on a tour around the other districts as dissent and tensions rise. An outraged President Snow concocts a special treat for the 75th Hunger Games.

This book is slow to start with the "couple" touring on the train and adjusting to living in their victors' houses in a separate village while the townspeople continue to exist in squalor. The love triangle grows more complicated with Gale now back in the picture. Mid-way through, the story gains speed with an interesting twist and never stops. Couldn't download the third quickly enough.

My only complaint is how old the narrator sounds. I grew accustomed to it in the first book and it doesn't detract too much from the fantastic story.

Would you try another book from Suzanne Collins and/or Carolyn McCormick?

Who would you have cast as narrator instead of Carolyn McCormick?

Nearly anyone. I don't think she's necessarily a bad narrator, but in this case she didn't have any sense of the characters she was playing.

Was Catching Fire worth the listening time?

Although I thoroughly enjoyed the story, and I have previously read the book, the narration by Carolyn McCormick made this listen almost unbearable. She has turned Katniss, a character with profound personal strength, who had to provide for her family at the young age of 13 or 14, into a whiny, simpering basket case of a girl you want to give a good firm slap. Instead of introspective pondering about the significance of events unfolding before her, this Katniss seems hopelessly lost in self doubt, self pity, and self loathing. I was taken aback at how the narration could so change a character. I don't think Carolyn McCormick really has any grasp on the characters she was reading, because I feel like she read an entirely different book than I did.

Even better the second time...

I loved this book and I will talk about content, but first I must give praise to the audio itself. I often read the books before I listen to them, so I don't expect to be so spellbound by the audio. However, with this book, the narrator (Carolyn McCormick) is great and helps to engage me even more than when I read it myself. I had listened to the first book "The Hunger Games" before reading the second, it had the same narrator, and I could hear here voice in my head as I read. I made a point of listening to both back to back and it was pure pleasure. In "Catching Fire", I found myself laughing and crying with the book. The narrator is consistent and spot on with her inflections and voicing.

Now for content, I had been anticipating this second book in the trilogy since the moment I finished the first. It continues just a short time after the first and covers all that has happened in between and then continues on with the story Suzanne Collins so expertly weaved. The book is perfectly title as it descibes exactly how the temperment of the Districts has developed. I don't want to spoil it for people with too much. The love triangle between the Katniss, Peeta and Gale is further fleshed out, but, of course, is not resolved. The author does a wonderful job of this, and I, myself, can't even decide who is the one to choose, I can't take sides.

I don't know how helpful this review will be, but I cannot praise this book enough. It left me more than eager for the final book and I am sure that I will need to read it again in the mean time.

I can't really add much to the reviews of the story that have been previously written here. It is suspenseful, interesting, and made two days of a road trip much more interesting. I look forward to the third book, except I won't be listening to it from Audible. The narration here, by Carolyn McCormick, was simply dreadful. Katniss is alternately a world-weary 50-year-old, and a whiny 10-year-old - and not as a point of character fluctuation but of wildly shifting narration. At points in the story where Katniss might be serious, she is simpering; sarcasm comes across as self-doubt. It's amazing what a voice can or cannot do for a character. Other characters also did not fare well; McCormick seemed to have not read the "stage directions," so a solemn remark sometimes came out as a shout. By the end, I was gritting my teeth in frustration and sometimes outright laughing at the terrible, erratic vocalization.

The story is quite interesting, though, and I will look for it in another form elsewhere.

One thing I must say between books 1 and books 2 of the Hunger Games books is how seamless they seem to flow into each other. As most would agree, the first Hunger Games was excellently put together so a continuation was very much welcomed.

The narrator grew on me, she did a very good job voicing the different characters that are introduced (which were quite a few). She did very well to show the tortured nature of the characters in this book.

Catching Fire introduces a lot of very interesting new characters I must say. The tyranny of the Capital and of Snow becomes even more evident in the title. The story progresses very quickly I find and certain aspects of the book seems a bit rushed if you ask me, however much was not lost in this title and it was very much enjoyed.

This book is intense and picks up right where Hunger Games left us. You would think Katniss & Peeta would now be living the victors life BUT then the rebellion starts. Katniss becomes the symbol of defiance and President Snow won't have it ......and so it goes...

I really like this series and there was no way I would not read all three books but in no way is this book equal to the first, with The Hunger Games (book one) being near perfect it's makes it a hard act to follow. Catching Fire isn't as good as The Hunger Games but it's still a great read/listen.

There's no doubt that she made a good go at writing a sequel that stands up to the first. Personally, I think it pales in comparison to the first, BUT it does make me think that there is the potential for a very good third book.

Both my sweetheart and I were happy that it didn't get hopelessly bogged down in the Gale/Peeta drama. Simply avoiding that pitfall is a mark of success as far as I'm concerned.

I think the plot was a bit choppy, but I also think the flaws are easily forgiven. Certainly, neither of us were bored. For the sequel to a young adult novel that could have completely degenerated into a teen love triangle, the author deserves credit for keeping her focus.

Fantastic sequel to the first...

First and foremost, if you have not read/downloaded the Hunger Games first, you will find yourself lost by this book.
Catching Fire is great sequel to the first story, propelling the reader into to all the places where I'd hoped after the first one ended. The stakes are higher and the scope is as well, focusing more on the entire territory of Pannem and less on the District or Arena. That said -- it definitely was the "middle story of a trilogy"... coming to a conclusions which really was just meant to set up the third book. But hey -- it was certainly as addictive as the first one. Last word of warning, and one which may other reviewers seem to miss prior to downloading -- THIS IS A YOUNG ADULT NOVEL! The dialogue is simple and the plot is concrete (there's nothing subtle about it). That's the audience it was written for. Not sure why there are so many people reviewing it as if it weren't intended to be that way.

I loved Hunger Games; I urge everyone I know to read it, gave it to someone for Christmas, and turned my boyfriend onto it, so of course I couldn't wait for the second book and I wasn't let down. This book will be a bit slower going in the beginning because the last one focused mostly on the game itself and quickly became a frenzied page-turner. But now that Katniss is a champion we see more of her day-today life while getting an idea of what's going on with the government and the people who suffer it. But this doesnt mean I was ever bored, it's just differently paced. The best part about this "downtime" is that you learn more about the characters. I especially enjoyed hearing about Haymitch, so much so that I think he's my favorite character now. Be patient though-without giving away any spoilers I'll just say the second half really gets exciting, and the ending will blow your mind. I didn't see it coming, and I am literally counting the days until the next book comes out.

Speaker seems very strange at first since she is proclaiming the protagonist's thoughts and narration as it was a public reading in front of a crowd. But one gets used to it. still, her stile and range will never become my favorit.

I've never read one of the books but I watched the movies and the books are much better than the movies. I totally can recommend this books. they are easy to understand and the story is quite catching as well.