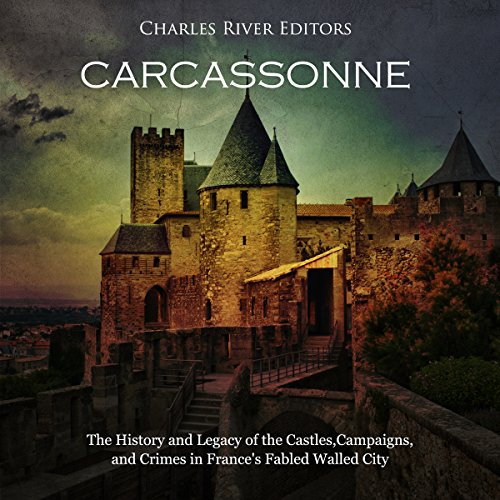 Carcassonne: The History and Legacy of the Castles, Campaigns, and Crimes in France's Fabled Walled City

Posted by the Porte Narbonne, or Narbonne Gate, the entrance of the fabled La Cite in Carcassonne is a striking bust that is often missed upon first glance, for it is overshadowed by the exquisitely preserved, millennia-old citadel in its background. But standing before the porte, her face draws one in - round, with plump cheeks, thin arches for eyebrows that follow the shape of her large, downturned eyes, wavy hair peeking out of her wimple - reminiscent of the "celestial" suns with human faces often seen in the bedroom décor of a hip, teenage girl from the '90s. Gaze upon her from a certain angle and distance, and it seems as if one of the iconic conical roofs behind her doubles as a russet-hued hennin.

Garbed in a fine gown with flower accents embroidered on her sleeves and a fussy wimple and veil, the joyfully radiant face that welcomes visitors into the citadel hardly appears to be the "heroine" type. Rather, the way she is depicted here is what usually springs to mind at the mention of a classic damsel in distress. That being said, while this particular damsel was indeed distressed, she relied on no one to not only save herself from the plight at hand, but the entire citadel itself. This damsel, as inscribed on the plaque underneath the bust, is the beloved Dame Carcas, often billed by the locals as the star of the town's origin story.

Carcassonne today is the capital of the Aude department in the Occitanie region of southwestern France, about 58 miles from Toulouse. It lies by the eastward bend of the glittering cobalt waters of the River Aude, which serves as a barrier between the two towns of the city: the Cité and the Ville Basse. It is the old Cité that attracts most of Carcassonne's visitors (three million of them each year), for it houses the historic fortress that looks like it came straight out of a fairy tale and supposedly became the muse behind the captivating castles featured in Walt Disney's acclaimed 1959 classic, Sleeping Beauty. But this breathtaking town is so much more than just the perfect spot for wedding shoots and social media narcissism, for it is a place that oozes medieval history.

Carcassonne: The History and Legacy of the Castles, Campaigns, and Crimes in France's Fabled Walled City examines the origins of the site and its sweeping history.