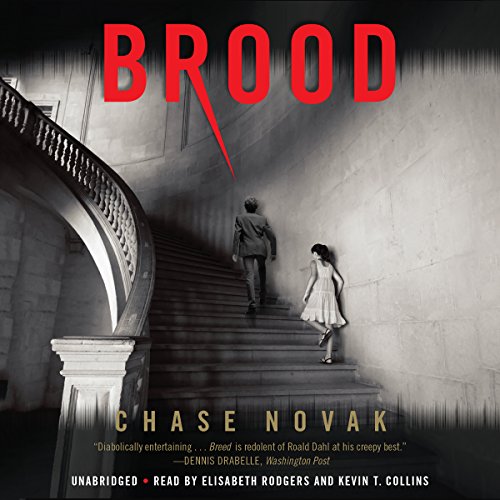 Two teenagers struggle with a horrific family legacy, and the woman who has adopted them fights for their lives - and her own.

Adam and Alice are reaching the age when some of the children created by the fertility treatment that spawned them begin to turn feral. Will they succomb to the same physiological horror that destroyed their parents? Every change brings on terror - the voice cracking as it changes, the swelling of the breasts, the coarsening of down into actual hair. Their aunt, Cynthia, oversees renovations to the Twisden family's Manhattan residence - torn apart by the children's parents at their most savage - and struggles to give her niece and nephew the unconditional love they never had. Meanwhile, in the world outside, the forces of good and evil collide.

Could not stop listening!

I adored this book! I read the first one (Breed) over a year ago, as it was recommended by Stephen King. I thought that book was clever and original. Brood picks up pretty much where we left off, save two years and takes the listener on a cool journey of terror. I highly recommend and hope for a third book!

This makes me hate my OCD.

I have an issue...when I start something I have to finish it. I loved the first book "Breed" but this one is pale in comparison. I forced myself to continue on and finally one day driving down the freeway I had to just pull off and stop this. I couldn't finish it. I wanted to know what happened to the twins but made it to chapter 16... wish them well but it wasn't worth it to me to have to force myself to finish it.

Would you try another book from Chase Novak and/or Elisabeth Rodgers and Kevin T. Collins ?

Yes to all. I read Breed, the book that takes place right before this one, and it was better; that being said, 'Brood's' ending made it worth the stale parts. Kevin T. Collins was brilliant when he narrated the Beautiful Creatures Series, so I think he's amazing. This is my first time with Elisabeth Rodgers and she was spectacular!

There were just moments where I was bored. My other issue is that, in the first book, I loved the twins and was rooting for them. In this one, Alice was a b-word and I didn't like her at all. Now, I think that it was done on purpose, but still... it made me sad to like characters so much and then grow to hate them. I know that the character of Dennis served a purpose, but I would've cut out a bunch of his parts, to be honest, and then just have him do what he needed to do eventually. I don't think it should've been shorter, but I just think that Mr. Novak did such an amazing job with 'Breed' that this book was slightly disappointing and quite dull in spots.

Which character – as performed by Elisabeth Rodgers and Kevin T. Collins – was your favorite?

Cynthia would be my favorite character performed by Ms. Rodgers and, as far as Mr. Collins goes... He was more of a narrator of general characters and plot points; however, I think his portrayal of the wild children of Central Park was amazing. They spoke like, "Me's thinking you no be..." blah blah... You get the idea...Basically, the wild children spoke without correct grammar, because they lost the ability to speak right when they went through puberty and the genetic craziness that their parents started took effect. I also think that, since many of them had to flee their parents for fear of their lives, they didn't learn a lot from the beginning as far as schooling goes. I think Kevin did an amazing job with those characters.

Do you think Brood needs a follow-up book? Why or why not?

No. If it does, I may or may not even try to read it. My issue is that I think that this book was nowhere near as good as Breed and I don't want Mr. Novak to ruin it further. Plus, the way this book ended, there aren't many characters that you could follow up with besides the twins, if they decided to do certain things after the end of the book. The only character that I'd be interested in seeing in a book (without ANY of the main characters from the first two) would be Rudolpho. I think he could make a very interesting focal point for a third book.

I know I said a few negative things about this book, but I think it's worth reading, especially if you've read Breed. Chase Novak, in an article, said that this could be a standalone. Honestly, I wouldn't try to read this without reading Breed first. Technically, I think he's right, but why would you skip the better book? Plus, you get all the backstory of how all these kids became wild and examples of what their parents actually did.

That being said, give these books a chance. They were very entertaining. I just finished it, but I think I'll have this sick feeling in my stomach for a few days.