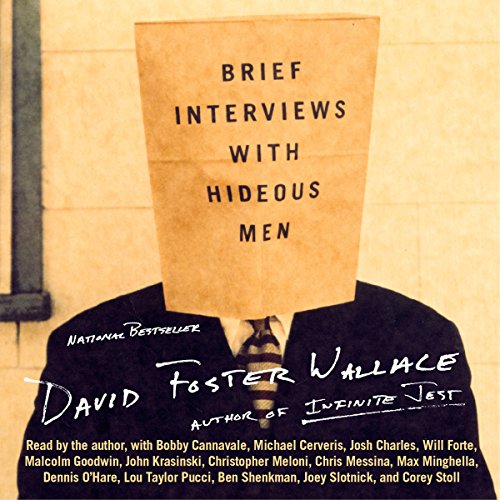 The second of David Foster Wallace's three short story collections, Brief interviews with Hideous Men is a book that is meant to be heard more than read. Many of these 23 stories are interviews, after all, and the remainder are portraits that slip easily into the realm of a big screen voiceover. Each piece is a monologue, either an interview with a hideous man where the questioner's voice is omitted, or a severely deep third-person description of a hideous man. Wallace has an uncomfortably firm grasp on this concept of "hideous". A life-long Midwestern depressive with a keen sense of adjectives and philosophy thanks to two academic parents, Wallace won many awards for his ability to translate human misery into text, including the Aga Khan Prize for Fiction for one of the pieces in this collection. These are tales of lonely, violent, desperate, very intelligent and articulate men, written by a man who would have easily counted himself among them.

There are a number of reasons why this collection's ideal form is the audiobook. Wallace himself narrates about a third of the stories with an unmistakable softness and intimacy that only the author could bestow on these undesirables. When they shout, rant, and say awful, murderous, or demeaning things, it is Wallace's gentle inflections that will coach you into a respectful ability to keep witnessing the interviewees' monstrosities. About another third of the collection is narrated by John Krasinski, of television's The Office fame. Kransinski's voice is a great foil for Wallace's, slightly less nasal and a bit more edgy, but no less compassionate. Krasinski is also very deep into this book; he adapted it into a screenplay and then directed the film as well as acted in its ensemble cast. in fact, the majority of the ensemble cast narrates the remaining third of these pieces. So the audiobook essentially contains the entire set of monologues from Krasinski's film by the actual actors in that film, minus the overarching thread they concocted to tie all of Wallace's pieces together.

There is a beauty in the simplicity of this plan that makes the text vivid in a way a film cannot. These are men explicating the very roots of their male psyche, and you will not want to know what their faces look like. These are the men who compel you to eavesdrop on them in the anonymity of a train ride to work, but you wouldn't want to get right up close and share a cab with them. You will be sickened to find yourself agreeing with some of what you overhear, but mainly, you will just be horrified by what you overhear. These are men on the edge of the abyss, with Wallace and Krasinski at their best in justifying the worst these characters have to offer. Megan Volpert

David Foster Wallace made an art of taking readers into places no other writer even gets near. In his exuberantly acclaimed collection, Brief Interviews with Hideous Men, he combines hilarity and an escalating disquiet in stories that astonish, entertain, and expand our ideas of the pleasures that fiction can afford.

I love David Foster Wallaces' work and was looking forward to a remake of this audible with so many great actors stepping in and performing some of the interviews. They leave out large sections of this book. I already heard the abridged edition of this that DFW did back when the book came out. I don't understand why this is labeled UNABRIDGED when it should be labeled ABRIDGED. That has been happening with all of his works. Why can't fans of DGW have all of his works available UNABRIDGED. I know the arguments regarding the footnotes, but DFW was able to employ them effectively with his reading of the Lobster essay.
With the talent that is available for these recordings, it would be fantastic to have Infinite Jest unabridged. That would resurrect that classic.

This is an abridged audiobook and should be labeled as such. Very disappointed in audible for the first time. A good recording, however incomplete.

This interview is very much intended for people who've only ever picked up one or two books by David Foster Wallace, as I am in that same category.

It's a funny feeling - seeing a movie based on a book before actually reading the book. I definitely fall into the camp of movie goers that need to read the book before seeing the film, using my insider knowledge to compare and contrast the differences, seeing it as almost a guided insight into why the filmmakers made the choices that they did. And for the longest time I felt I was better off leaving my experience with this material at the movie theater.

I didn't bother with reading "Brief Interviews With Hideous Men" because of everything I've heard of David Foster Wallace up until this point. Words like brilliant, introspective, and thought-provoking would get tossed around. Sure, it's all mounting evidence that points to the fact that I should be reading his stuff, but then other phrases like "not for everyone" and "you might not get it" would be added in for good measure. I'm not saying I hate to be challenged by a writer's material, but I'm going to need more to it's defense than "you just don't get IT". In these conversations, does anyone ever really know what IT is?

Happy to report, all my fears about tackling the deep introspection of David Foster Wallace's damaged characters was not an exercise in tedium. It was just the opposite.

I never intended on reading this book, even after my (apparently isolated) glowing reviewing of the John Krasinski movie of the same name. And then one day, randomly flipping through the dramatic fiction section on Audible, I came across the voice cast of the audiobook for "Brief Interviews With Hideous Men". Bobby Cannavale, Will Forte, Malcolm Goodwin, John Krasinski, Christopher Meloni, Chris Messina, Max Minghella, and Dennis O'Hare, with additional narration from the book's author. It was almost too good not to listen.

But I did, and I'm glad for it. First off, the material, whose complexity scared me away for so long, was anything but egotistical or out of the realm of understanding. What we have here are a series of shorts (vintages in the film adaption) that all share a unifying theme of sex, attraction, lust, envy, and the idea of selfishness disguised so ingenuously as selflessness. Characters big and small, confident and inadequate, old and young - they all share with each other or with themselves what it takes to grow up, the make it in a relationship, what sex means to them, what it means to their partners.

I kind of want to read the book just to see how much of my interest was gauged on performance (it feels more like an audio performance rather than an audiobook if that makes any sense) and how much on the material itself, although I'd be surprised if the written material alone didn't give me the same reaction I had while listening to the audiobook.

Not to mention all of the other books in David Foster Wallace's bibliography I plan to read.

Would prefer to hear the truly unabridged version

Where does Brief Interviews with Hideous Men rank among all the audiobooks you’ve listened to so far?

Middle of the pack. For DFW fans it's a must have. Unfortunately it isn't the entire book, but selected portions, and there doesn't seem to be any rhyme or reason as to why those particular selections were made.

DFW's unique perspective on what makes men "hideous" and the way in which the characters are blind to their own grotesque behavior.

After the first two stories (dull sketches, read stiltedly) I almost gave up but there were enough plums in what was left that I was glad i stuck it out. He has a great ear for dialogue and for the little self-deceptions and manipulations that pepper his protagonists' dialogues. There are numerous readers and most of them are really good. This is the tragedy though: I read the review on amazon and some of the stories that didn't make the cut sound really interesting, so why did they get dropped in favour of what sounded like padding? Ach, I'll have to buy the papery version and read it myself I think.

Hideous and not in a good way

Truly dreadful in every sense. The author abuses his ability for deft description by using it only to describe horrible men. Even worse, he feels he can do and say any hurtful thing yet honestly believes an apology and a whine that it hurts him too will make up for his Catskills humour excuse for sociopathy.
The only amusing thing is that the narrators *say* the word 'cue' in between paragraphs.
I bought this because I enjoy the work of some of the narrators: sucker! Anyone watching my expression as I listened to this on a commute would have thought I was in pain: and they'd be right.

David Foster Wallace is an amazing writer, and this team of narrators does justice to his characters. I highly recommend reading or listening to this.

I thought this was a great audiobook because of the dramatic readings. the performances really brought the story to the ears with added life.

In progress - enjoying it, but narration style?

I've enjoyed many of these stories, but have found some of them unlistenable due to repeated utterings by the readers -- usually "cue" and sometimes "return to text." If I had the paper version in front of me, I might get a clue as to why, but right now it's annoying as hell.

Gem of Note: Interview 71 (the one referencing Bewitched)... hilarious.